Making a home a fortress

When picking somewhere to live, we know you’ll want to feel comfortable in – and proud of – your home. But, it’s not just families and individuals that have homes, football clubs do too.

So, to look at the importance of a footballing home, we’ve conducted a detailed study of all 92 Premier League and Football League teams in England to find out which stadiums truly are a fortress, and which are fruitful away day.

Ranking each of the 92 sides in order of best to worst home records, the research compares all sides, finding it’s not just Premier League stadiums which are hard places to get a result on the road.

We’ve also looked at how home advantage has changed over time, including for teams who have moved grounds, as well as the impact of matches taking place behind closed doors.

And, to top it all off, we’ve also taken a look at the most affordable places to live in areas home to a Premier League or Football League side.

Find out how your club ranks below…

Every club’s home record over the last 10 years

Considering every league match played by the 92 clubs since the start of the 2010/11 season, it’s the Manchester clubs that come out on top, with City (2.47) and United (2.17) having the highest points per game records over the period.

Eight of the top 10 stadiums are home to Premier League teams, but there are two inclusions from outside the top flight. Championship clubs Luton Town and Brentford rank even higher than Premier League mainstays, such as Leicester and Everton.

At the other end of the scale, Morecambe, Birmingham and Sunderland have proved to be the happiest hunting grounds for visiting opponents, while Crystal Palace have the poorest home record of any top flight side.

The dwindling impact of home advantage

It’s a well-known fact that most football teams tend to perform better in home fixtures than when playing away. But the concept of home advantage has been in decline for a number of years, and this appears to have been exacerbated by the impact of the Coronavirus pandemic, which has seen clubs play without fans for the best part of a year.

Over the 10 previous seasons, the highest average points per game record for home sides in the Premier League and Football League was 1.64 in 2016/17.

But, this rate has fallen for each of the seasons since, with a large drop off for the 2019/20 and 2020/21 campaigns – both of which have been affected by the behind-closed-doors ruling. The average record of a home side during this season is as low as 1.44 points per match. 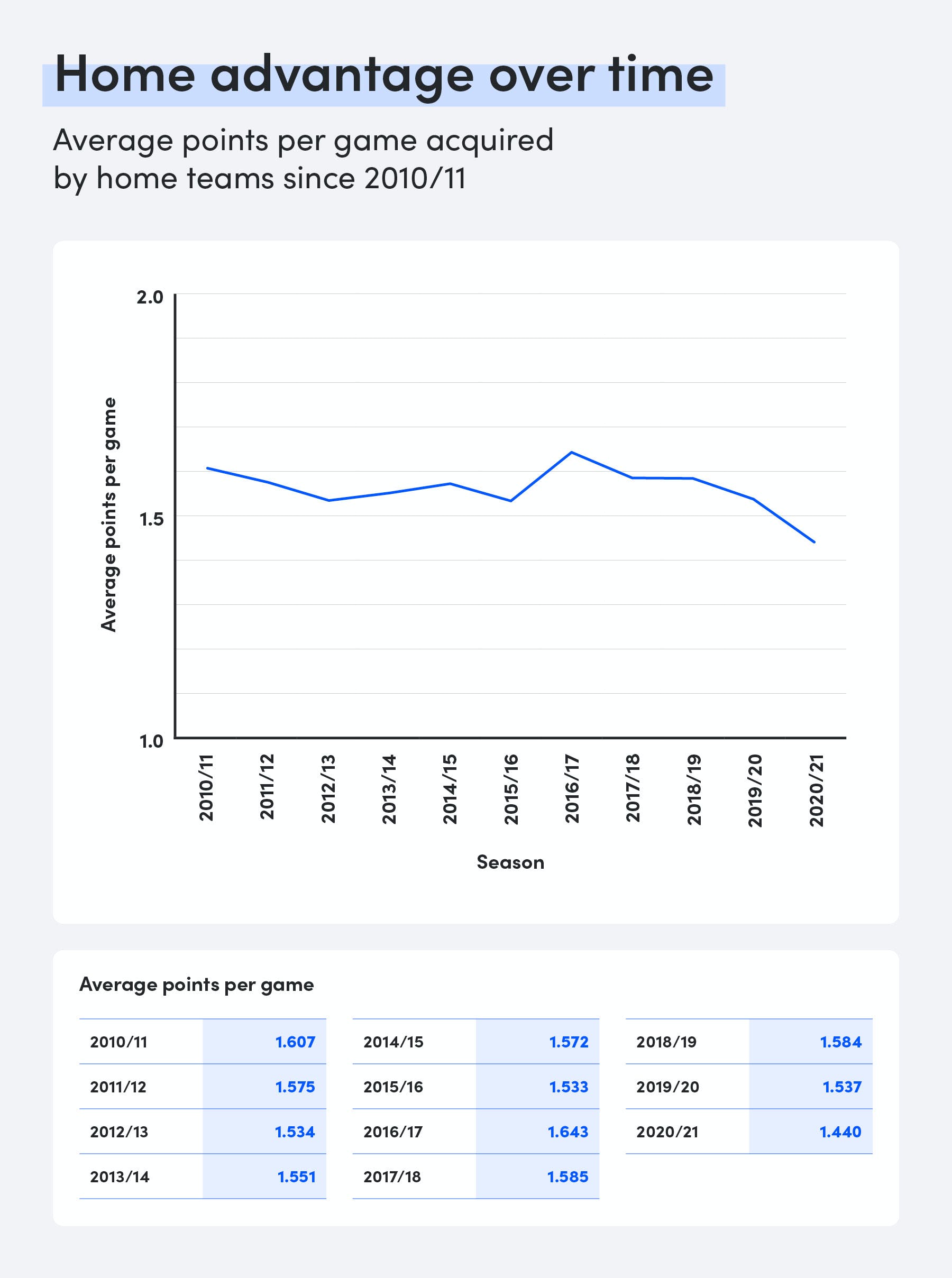 Football clubs are known to move stadiums, and over the research period, seven teams within the current 92 have switched grounds: AFC Wimbledon, Brentford, Brighton, Coventry, Rotherham, Tottenham and West Ham.

Moving to a new location can sometimes be considered unsettling, and the team may take a while to get used to their new surroundings. While we only have a small sample size to draw conclusions from, our research indicates that, in general, teams perform worse after a stadium move than in the seasons leading up to the departure. 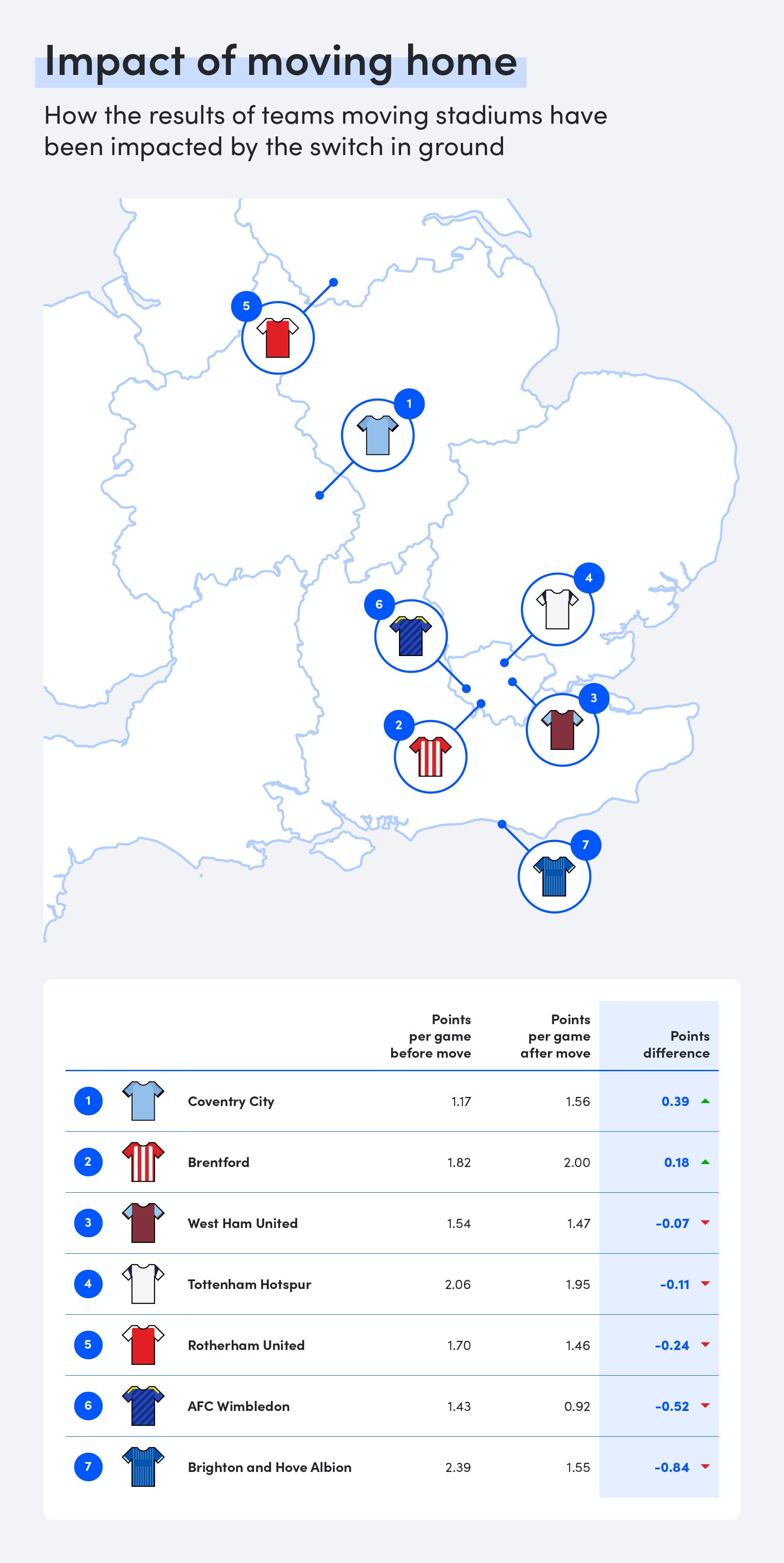 Despite a very unsettled time with multiple stadium moves and no permanent home, Coventry is the team that has best adjusted to moving, averaging 0.39 more points per home game since leaving the Ricoh Arena for the first time.

Brentford are the only other team to show an improvement in results, following a switch in stadiums. Meanwhile, Brighton have been hit hardest by their new surroundings – failing to adjust to their new home since 2011/12.

Living near your team

For some fans, being close to their beloved football team may be a deciding factor in where they choose to live. So, we’ve taken a look at which cities are the most affordable and are also home to major football clubs.

Bradford (home to League Two side Bradford City) is the most affordable area near a Football League stadium, with the lowest salary to deposit ratio. And, it’s even relatively affordable to live near the home of 2019/20 Premier League champions, Liverpool, who rank sixth on the list.

If you’re considering moving homes to be close to your favourite football team, you’ll most likely need a mortgage to purchase the property. Check out our mortgage rates to see how much your monthly repayments could cost.