Having been stuck in our homes so much this past year, we know the simple joy that comes from looking at houses for sale. Whether you’re looking for inspiration for your next house move, or you enjoy the drama of a tricky renovation, we can all appreciate a good property show. If you're on the hunt for your own property project, you can compare our best mortgage rates to explore your options.

Property is one of the most popular genres on TV and has been for several decades. Recently, you may have been hooked by the glamorous world of Selling Sunset or enticed by the picturesque idyls of Escape to the Perfect Town.

Equally inviting are the presenters and real estate experts, who take us along on their fixer-upper projects and property-selling adventures. These knowledgeable and familiar faces are often the difference between a fantastic show and an uninspired clone.

Having looked at property shows from the UK, as well as those available on popular streaming services, we’re excited to present the top-ranked property programmes and presenters. This should help you pick your next binge series!

The most popular property shows

Taking the top spot as the UK’s favourite property show is Location, Location, Location, with an overall score of 8.26! This series has been going for over 20 years and its presenters, Kirstie Allsopp and Phil Spencer have become household names in the UK. 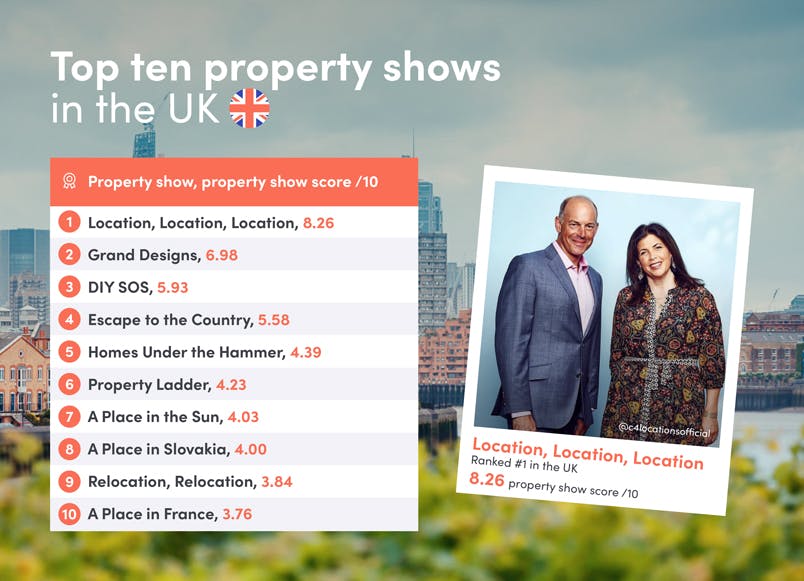 The show inspired a spin-off series, Relocation, Relocation, which broadcast from 2004 to 2011 and the franchise has proven popular with both domestic and international viewers, with Australian versions of both shows becoming successful in their own right.

The runners up in second and third places were British TV giants Grand Designs and DIY SOS, showcasing a mixed bag of architecture and home renovation with scores of 6.98 and 5.93 respectively. 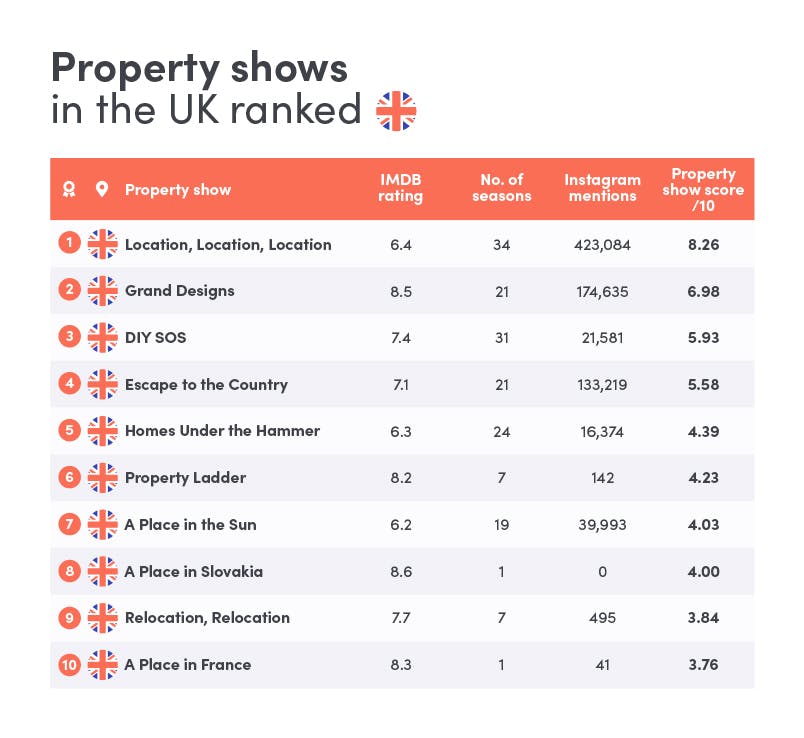 The most popular property show available to stream in the UK was Tiny House Nation with a score of 7.16. As the title suggests, the show’s focus is on small houses with hosts John Weisbarth and Zack Giffin helping families create their dream little homes. The programme currently has five seasons, which ran from 2014 to 2019. 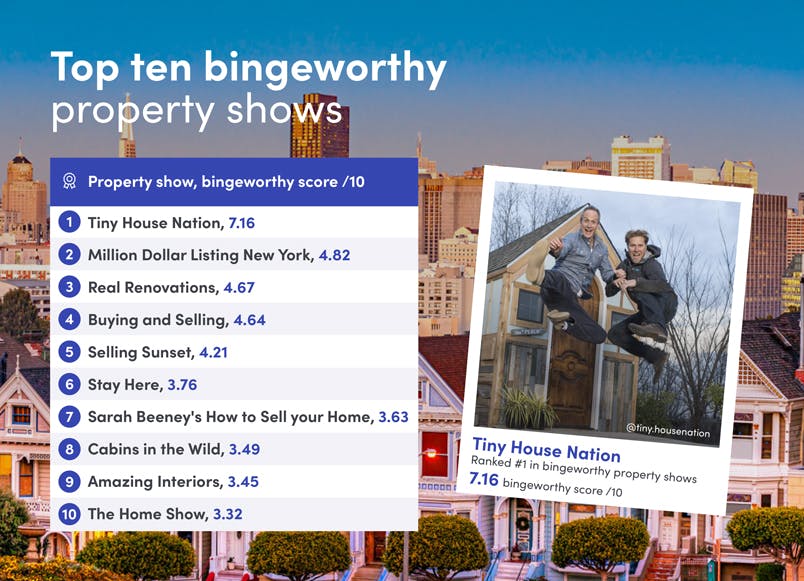 Following closely behind as the runners up are two real estate shows, Million Dollar Listing New York and Real Renovations, with scores of 4.82 and 4.67.

Million Dollar Listing New York follows a group of luxury real estate agents as they go about their business of selling some of the most exclusive, and expensive, property in the Big Apple. Real Renovations (or Real Renos) follows contractor Jim Caruk and his team as they demolish, rebuild and work on some of the biggest home-renovation projects in Canada. 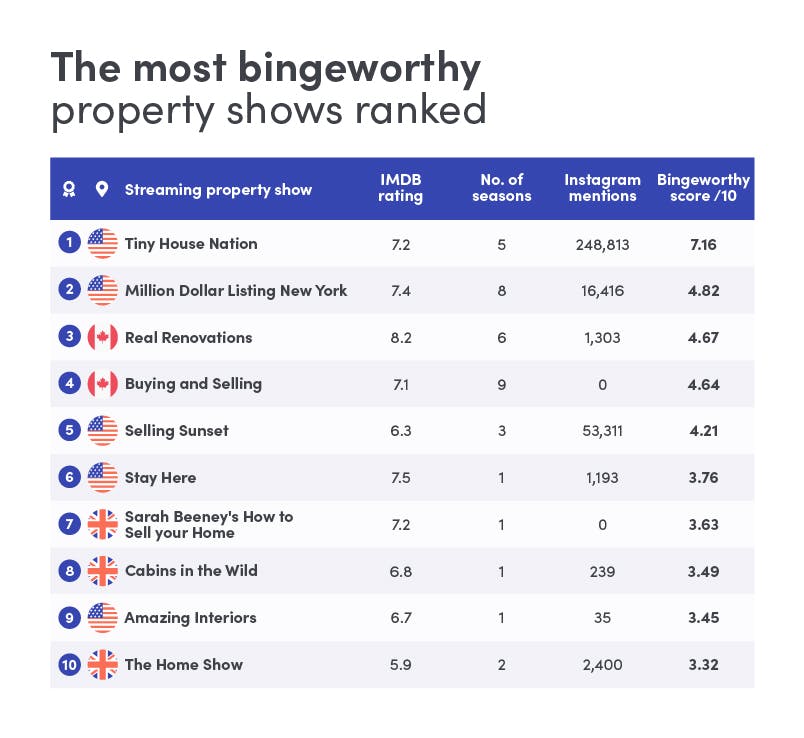 The biggest property star on UK television and streaming services is Scott Disick, clinching the top spot with a score of 5.71 despite having only one property show to his name. Catapulted to fame by the globally popular Keeping Up with the Kardashians, Disick has appeared in many reality TV programmes since. His recent property show, Flip It Like Disick, follows Scott as he and his team renovate luxury homes in and around Los Angeles.

Following closely in second place is the prolific Sarah Beeny with a score of 5.31. Over her 20 year career she has made shows that look into all manner of property topics, including Property Ladder, Double Your House for Half the Money, How to Live Mortgage Free with Sarah Beeny, and Sarah Beeny’s Renovate Don’t Relocate.

Taking third place is Jasmine Harman with a score of 4.61. A familiar face on British television, Harman is most famous for being one of the original and most long-standing presenters of Home or Away, which she first presented in 2004. The programme follows British couples looking to purchase property abroad, with them being shown several options before finally deciding at the end of the show. 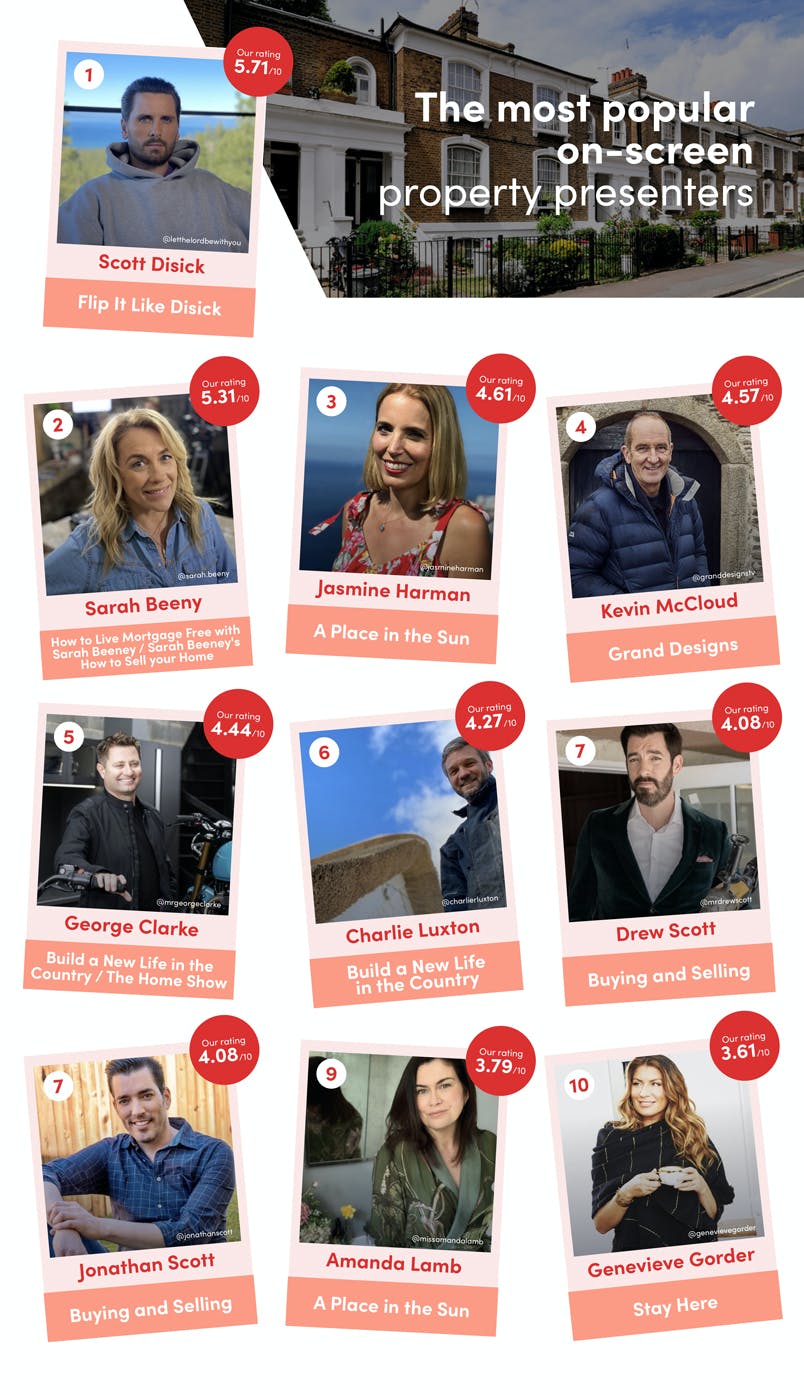 So, which are the celebrity estate agents that could potentially be earning the most for every sponsored post on Instagram, taking into account their number of followers and level of engagement?

Scott Disick has by far the most evaluated social media presence with a single post from his Instagram account potentially being worth as much as $81,640! His appearance on a broad range of reality TV shows has earned him a colossal 24.6 million followers on Instagram alone, so it’s no wonder his posts are valued so highly.

In second place are Shea and Syd McGee, whose joint Instagram account could earn them $9,432.50 for every post to their 2.8 million followers. While famous for their hit show on Netflix, Dream Home Makeover, they also run a successful interior design studio and online store.

In third place is Drew Scott, one of the biggest names in property TV, who just outperformed his brother Jonathan for a place in our top three. The two siblings are famous for their hit TV show Property Brothers as well as many other shows and spin-offs, including the popular Buying and Selling on Amazon Prime. The value of a single post from Drew’s Instagram account could be worth as much as $7863.75.

See the full table below. 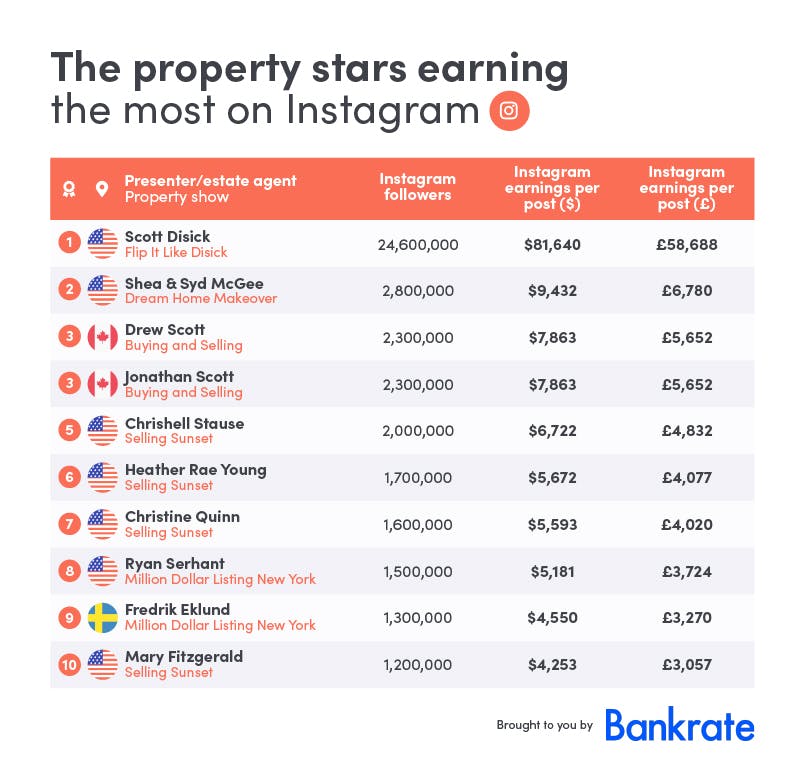 So, did your favourite TV show or presenter feature on our lists? If not, why not give one of these shows a go next time you need a new series to binge? If you’re picking from this lot then you’re in fairly safe hands!

For this study, we created a list of TV shows about properties and real estate from UK television and streaming services. We then created a separate list of all the hosts, presenters and featured estate agents from these shows.

We collected data on each show, noting their IMDb scores, number of series produced and their popularity on Instagram, combining this into a singular score.

Similarly, we created a score for the presenters by combining the number of shows that they’ve hosted, the number of years since their first property show, and their Instagram followings.