How Brexit will affect your finances

On 31 January, 2020 the UK officially left the European Union.

We are now in a transition period for 11 months. Although much of the political debate has been over the rights of citizens to move within Europe and the pros and cons of the Single Market, Brexit will also have an affect on our everyday finances.

Here we look at how this might affect savings, business and credit cards in the UK.

In light of the expected economic downturn due to the coronavirus (COVID-19), Bank of England has cut the base rate down to 0.1%.

This is good news for borrowers, including those people with credit card debt and mortgages, but bad news for savers. Consumer price inflation is currently at 0.8%, which means that the real purchasing value of savings is being eroded.

“The impact of the Brexit referendum on real wages may be fading, but Brexit uncertainty creates risks of a bigger shock to growth and employment,” it says in a Special Report “Weakening UK Household Finances Pose Risks” published on May 8.

The value of your holiday pound, and the exchange rate you get when you use your credit card to spend abroad, are affected by foreign exchange (forex) fluctuations. 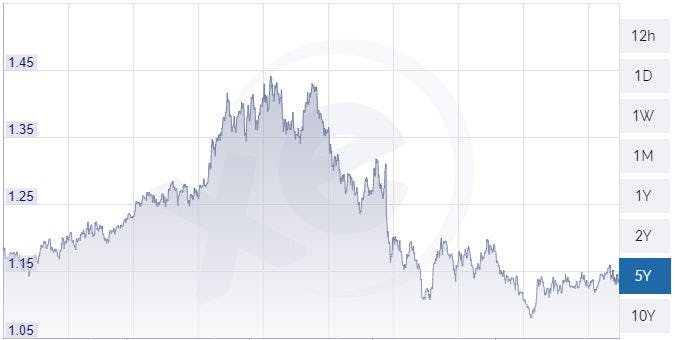 GBP vs. EUR for the last five years

When you make overseas purchases using your credit card or debit card, your provider applies a foreign currency conversion rate. This rate will be affected by the variations in the value of the pound, and any volatility in exchange rates.

If the Brexit talks look as though the UK is failing to secure a good deal, sterling may fall again. The Bank of England may have to raise interest rates to protect the pound.

While interest rates remain low, credit card companies are unlikely to increase their own interest rates. However, the era of rewards and benefits for holding a card seems to be at an end, says Andrew Hagger, founder of MoneyComms, the money information service.

“The only decent rewards you get now is if you use a card to buy items within a certain store – for example using a Tesco card to shop instore. If you use the Tesco card, or ones from M&S, John Lewis and Sainsbury’s outside their own shops, the rewards are slim. I don’t see any major changes in the pipeline.”

After Brexit, all existing European law will be incorporated into UK law.

This includes a ban on credit and debit card surcharges and applies to all purchases made within the European Economic Area (EEA). It means airlines can’t add hidden charges for online bookings. There are unlikely to be any changes in the short term, as Teresa May has heralded this move as a victory for consumers.

If you have savings with a bank or financial institution that goes bust, you’ll be compensated by the UK’s Financial Services Compensation Scheme (FSCS).

The EU put in place a 0.3% cap on credit card interchange fees that was aimed at reducing the cost of card payments. The UK Cards Association estimated that almost £900 million in savings should be passed onto consumers.

Interchange is a fee paid by the retailer’s card acceptance provider to the consumer’s card issuer each time a card payment transaction occurs.

The cap on fees applies on most product types within the European Economic Area (EEA).

This will become law in the UK after Brexit, and is unlikely to change, says Andrew Hagger, of MoneyComms.

“All the EU laws will be incorporated into English law and then the government will look at which ones need to be changed. Interchange fees aren’t going to be a priority as there are many other issues they will need to look at, so I anticipate things staying much as they are for several years at least.”

Business and the economy

There are still some concerns about the health of the economy, which is why the Bank of England decided not to increase interest rates this time.

Brian Johnson, Insolvency Partner with the accountant HW Fisher, said that the economy had been affected by concerns over Brexit, and would continue to do so while the uncertainty remained.

“Immediately after the Referendum there was doom and gloom, and then the stockmarket recovered and the pound came down which made exports cheaper and interest rates stayed low,” he said. “That was a false dawn, with people saying that Brexit was not a problem.”

Behind the scenes, businesses were delaying decisions on investment and recruitment until the negotiations were concluded, he said, and there would be more insolvencies among businesses. This was not necessarily a bad thing, as poorly-run companies would be taken over by more efficient managers.