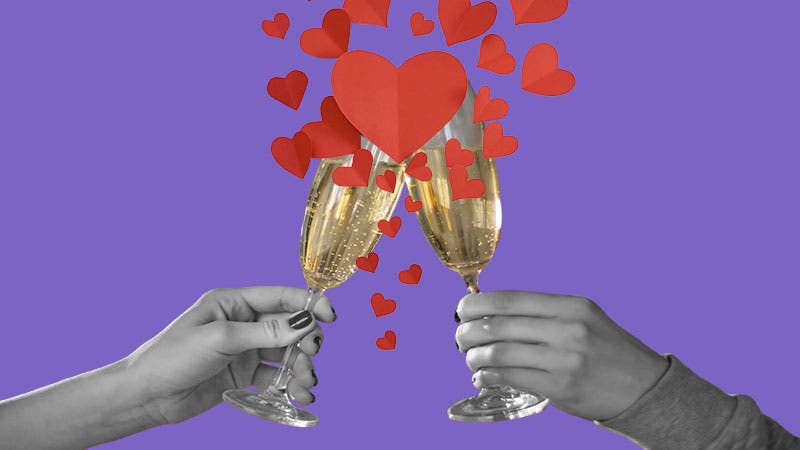 It’s the season of love. But for many Americans, it’ll come with a hefty price tag.

Of U.S. adults in relationships, 70 percent plan to spend money on their partner this Valentine’s Day, with the average amount being $152. For millennials, the number jumps to $208. That’s according to Bankrate’s 2020 Valentine’s Day survey, which polled 1,485 individuals with significant others nationwide about their spending expectations for Feb. 14 on anything from food to entertainment, and of course gifts.

Americans aren’t afraid to spend a pretty penny to celebrate their romance during this season. Across the U.S., spending is expected to reach $27.4 billion, up 32 percent from last year’s projections, according to the National Retail Federation’s 2020 forecast.

But while experts say the holiday is an understandable — and necessary — part of any healthy relationship, it may be difficult to avoid overspending amid extensive advertising and social pressures. It’s pertinent, however, to be wary of busting your budget for one holiday alone.

“There’s an adage that you can’t truly love someone else until you love yourself,” says Mark Hamrick, Bankrate’s senior economic analyst. “The same holds true with managing one’s personal finances. A relationship will not be sustainable if one is overspending with a prospective love interest, likely in part because one’s own spending is out of control.”

When it comes to individual Valentine’s Day plans, millennials are leading the charge. According to Bankrate’s nationwide poll, 75 percent of individuals in this generation plan to spend money for the holiday. That’s higher than any other age group and a bit above the national average.

Overall, U.S. adults between the ages of 24 and 39 report that they’re expecting to dish out $208 for Feb. 14, compared with the $152 reported by the typical adult. That amount is also higher than their older counterparts, with $160 for Generation X, $101 for baby boomers and $43 for the silent generation.

Not only are millennials more likely to spend the most, they’re also expecting their partner or spouse to spend the most on them. The typical adult believes an average of $102 will be spent on their Valentine’s Day gift or experience. For millennials, however, that total jumps to $153, compared with $93 for Gen Xers and $55 for baby boomers.

What’s driving the generational divide on spending? Younger adults are more likely to be in newer relationships, meaning millennials may feel pressure to spend more to impress their partner, says Megan Gorman, founder and managing partner at Chequers Wealth Management.

“It’s part of courtship,” Gorman says. “Millennials are still dating, they’re getting married later or are in the early stages of their marriage. For them, spending on this stuff becomes more important.”

That corresponds with Bankrate’s survey findings, which showed that those who have been in longer relationships tend to spend less on their spouse or partner than those who are in newer ones.

Social media and the internet may also be pressuring millennials to spend big bucks, Gorman says. Sites such as Facebook, Instagram and Snapchat come with an inherent pressure to impress friends and followers. At the same time, retailers may be influencing shoppers through frequent advertisements and online ads, including sponsored posts from celebrities.

But the broader economy could also be a reason for upbeat participation in general, says Katherine Cullen, senior director of industry and consumer insights at the National Retail Federation who leads its annual Valentine’s Day forecasts.

Wage growth and a low rate of joblessness are feeding back into consumers’ pocketbooks, boding well for consumer spending. During recessionary periods, for example, American consumers aren’t as willing to spend as much, Cullen says.

Overall, Valentine’s Day comes in as the sixth highest in terms of spending on a holiday per American, she says.

“It’s an environment that’s conducive to consumer spending, and that helps play out in events like Valentine’s Day,” Cullen says. “When people feel good about their individual situation and their own paychecks, it’s easier for them to spend a little bit more on something for a loved one, such as a night out or a box of chocolate for friends.”

But avoiding overspending is crucial for millennials, a generation buffeted by trillions of dollars in student loan debt. These individuals may not be in the financial position to chalk up as much money as they want to, Hamrick says.

“I’d suggest that younger individuals try to reduce expectations, indeed, to lower their spending on Valentine’s Day-related activities,” Hamrick says. “It can be detrimental to blow the budget on dating at a time when career trajectories are still being established and incomes are not yet as high as they might be down the road.”

How to avoid overspending while still celebrating the holiday

For those who might feel pressure to spend big on Feb. 14, Bankrate’s survey found good news: A mere 6 percent report being disappointed by a Valentine’s Day gift because it was too cheap.

More often than not, individuals are impressed by the sentiment behind what their partner did for them, with 62 percent reporting in the survey that they were never being disappointed in a gift from a current partner or spouse.

1. Communicate with your partner

The first step to avoiding overspending on the holiday is communication, Gorman says. Have an open discussion with your partner about your expectations and wishes for the holiday.

2. Create a Valentine’s Day fund in your budget

Once you sync up as a couple, allocate a portion of your finances to creating an “us” fund, she says. Talking about money, however, might be harder for Americans who are not married or are in newer relationships. Use the occasion to create an open dialogue about money, Gorman says, as it’s an important aspect of any relationship’s well-being.

Bankrate’s survey found that not many couples are holding these kinds of conversations ahead of the holiday, let alone sticking to the limits they set. Just 10 percent say they set a price limit and follow it, while 19 percent say they arrive at a number as a couple but often go over the number.

“It’s OK to splurge occasionally,” Gorman says. “Part of being healthy financially is you want to be able to enjoy your money. But it’s about understanding where you are in the relationship. You probably are going to budget on your own to create an amazing Valentine’s Day, and if you’re in a more established relationship, it’s going to be a couple’s decision.”

3. Be wise about your purchases

That includes being wiser about your purchases, Gorman says. For example, if you know your partner or spouse loves jewelry, a relationship with an independent jeweler or diamond dealer could be a cost-effective alternative to buying something at Cartier or Tiffany every holiday, she says.

Overall, deciding how much to spend and sticking to your Valentine’s Day budget is similar to other financial practices. Make sure your spending is consistent with your income level while also still allowing enough breathing room to save for emergencies and retirement no matter what age group you’re in, Hamrick says.

If you realize you don’t have much to spend, consider a low-cost alternative. Cook a romantic dinner at home or visit a free park or museum, Hamrick says.

“For more established relationships, it is absolutely appropriate to discuss what’s reasonable, feasible and sustainable with spending,” Hamrick says. “It is important to discuss expectations and capability regarding who pays for what. While fairness is one consideration which can involve being equitable, issues come into play, including each individual’s level of income and expenses more generally.”

5. Realize it’s important to be on the same page about money

But the bottom line is: Both money and love are an important part of any relationship, Hamrick says. Not being on the same page on either of those topics could lead to problems down the road.

“Another way of looking at this is to set reasonable expectations regarding expenditures while dating within one’s budget without adding to debt,” Hamrick says. “If one feels tremendous pressure to overspend on a date, it could be that relationship — or at least the approach — is flawed from the very beginning. Remember that disagreements over finances represent a key factor contributing to divorce. It is important to get these issues set into a healthy pattern from the very beginning.”

Bankrate.com commissioned YouGov Plc to conduct the consumer survey. All figures, unless otherwise stated, are from YouGov Plc. Total sample size was 2,602 adults, including 1,485 who are currently in a romantic relationship. Fieldwork was undertaken on January 15-17, 2020. The survey was carried out online and meets rigorous quality standards. It employed a non-probability-based sample using both quotas upfront during collection and then a weighting scheme on the back end designed and proven to provide nationally representative results.