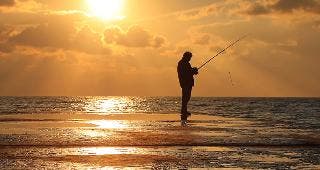 While the Affordable Care Act, or Obamacare, remains a controversial topic in the political arena, many Americans are assessing how it might impact their retirement plans. After all, health insurance coverage is one reason why many people stick with their jobs until they reach age 65, when they’re finally eligible for Medicare.

It turns out that an unexpected side effect of the law is that it’s enabling some people to consider early retirement. In fact, a recent Bankrate poll found that 23 percent of Americans would retire early if they could get affordable health insurance outside of their jobs, while just 8 percent would not. Two-thirds of Americans said health care availability would make no difference in their retirement date.

Before the law went into effect, it was often difficult and expensive to find an insurer willing to provide coverage for older adults — especially those with pre-existing conditions. Now the coverage is easy to get, regardless of existing ailments, and government subsidies help make it affordable for low-income earners, and even for those with moderate incomes. Federal appeals courts recently issued conflicting rulings on the legalities of the subsidies, but the issue is not likely to be decided until mid-2015. In the meantime, the subsidies will be available again in the next enrollment period.

For example, in New York state, a couple with a paid-off house and investments that yield $35,000 in annual taxable income would end up paying about $210 per month for health care after receiving the equivalent of about $520 a month in subsidies from the government.

Pre-existing conditions no longer a factor

Former accountant and financial adviser David Wright retired at 55, obtaining insurance for himself and his wife on an exchange in California. “Before the law, I was paying $800 per month for a $4,000 deductible. Now I pay $700 per month with a $5,000 deductible. Otherwise, the coverage is the same,” he says.

For Wright, the lower price wasn’t as important as getting insurance in the first place. “In my early 50s, I was trying to retire but kept getting turned down by insurance companies because I have adult-onset asthma. After Obamacare, I had no problem getting insurance,” he says. 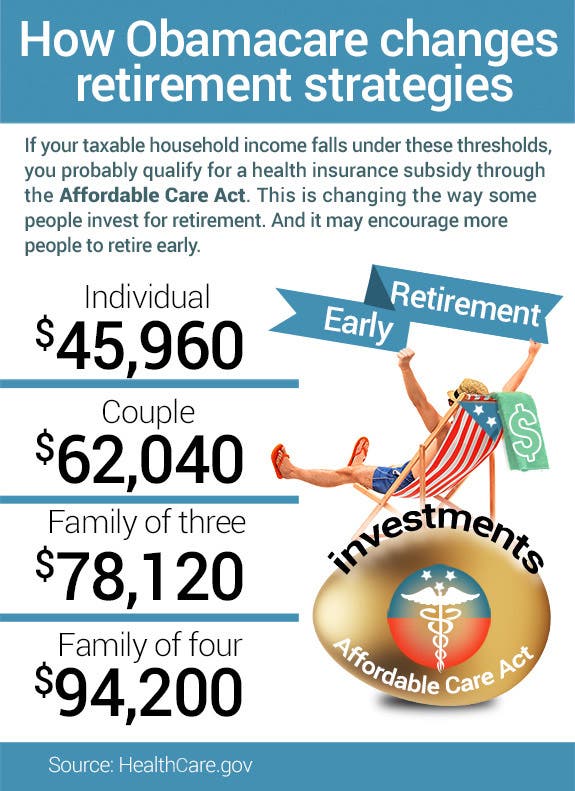 Certified Financial Planner professional Erik Carter of Financial Finesse says the availability of health care makes it easier to walk away from a job. “Simply put, many employees we work with have radically changed their retirement planning because of the health care law,” he says.

Carter doesn’t believe this is changing most Americans’ retirement plans, but it is creating new possibilities for some. “A lot of people were staying in their jobs for the health insurance. Now that they don’t have to, they’re looking at ways to get investment income earlier and not rely on their job,” he says. “This is a big win for people in their late 50s and early 60s who may have enough savings to retire but stick around for the health insurance.”

Carter says early retirees can more easily qualify for health insurance subsidies. “The law also incentivizes people to have more money in accounts other than a pretax 401(k),” he adds.

Currently, individuals earning between $11,490 and $45,960 may qualify for lower premiums when buying insurance on an exchange. The range for qualifying couples is $15,510 to $62,040. Any withdrawals from pretax accounts such as traditional IRAs and 401(k)s are taxed at ordinary rates. But withdrawals from accounts such as Roth IRAs and Roth 401(k)s don’t count toward income since they are purchased with money that has already been taxed.

But that’s a two-edged sword, he adds. “Because the health care subsidies are not asset-tested, this means a lot of retirees who don’t qualify for Medicare can manipulate their investment income to fall below the threshold for Obamacare subsidies by moving money between taxable and nontaxable retirement accounts, and you’ll have more people collecting subsidies than initially projected.” That would likely put more strain on the health care system, he says.

Insurance more affordable for some

Missouri-based nurse Stephanie Payne is retiring this year to focus on writing about end-of-life care. “I was a nurse for 30 years, saved in my IRA and kept a close eye on my finances. I wanted to retire two years ago, but I couldn’t afford it then. Getting health insurance on my own would have cost $1,200 a month. Now, my health insurance is $500 per month for the same deductible and coverage,” she says.

Although Payne says she had enough passive income to pay for her basic needs a long time ago, she was stuck in her job for years because health care was too expensive. “I couldn’t afford to pay that much for health insurance, so I kept working. In my job, my copay was $219 per month, and an extra $1,000 per month out of pocket just wasn’t doable.”

Although her health insurance costs are set to rise by nearly $300 per month when she leaves her job, Payne says she can afford that. “I won’t use my car as much, so I’ll save on gas, which will help. I’m also going to downsize my lifestyle,” she says.

For Payne, the best part of being able to retire early is that she will get to move. “It’s been a dream to move to Oregon for quite a long time and I can do that now.”