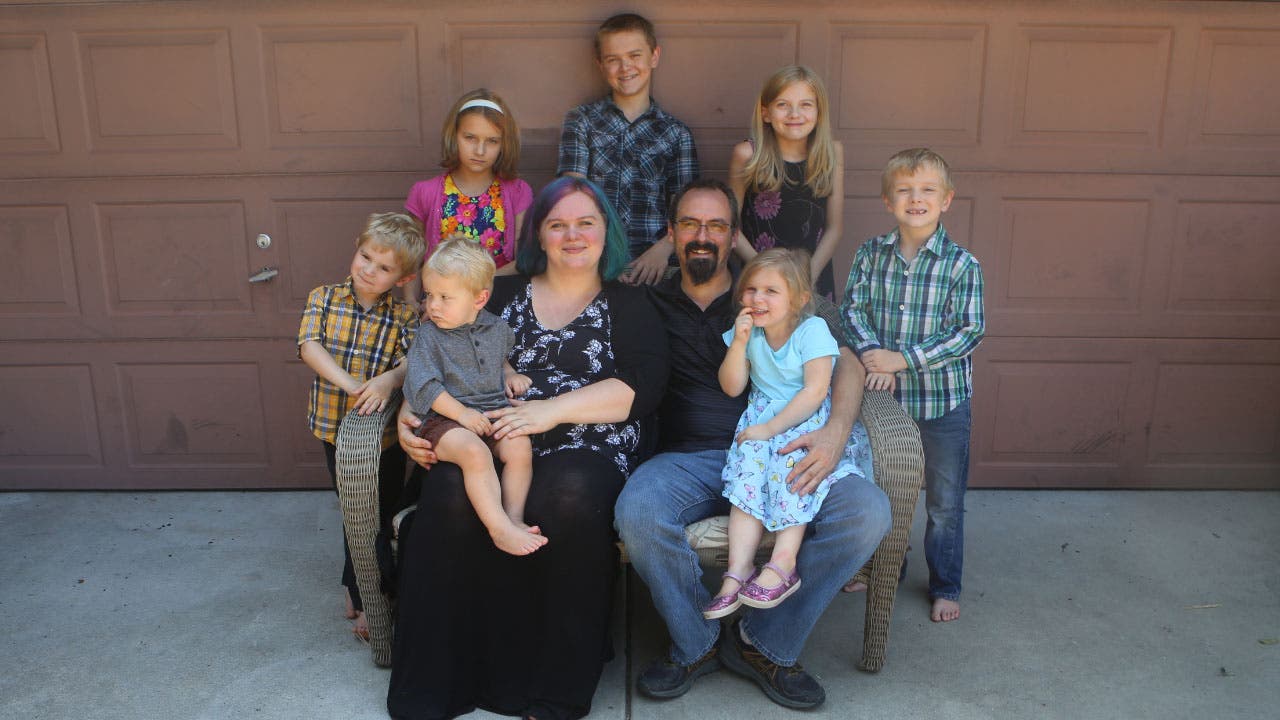 Steffanie Hinson isn’t ready for the next recession — mostly because she’s still recovering from the last one.

For the 37-year-old Kansas resident, raises have been few and far between, while rising health care costs and day-to-day expenses keep adding up. To make ends meet, Hinson said her family had to halt their 401(k) contributions and dip into their emergency fund, a pool they typically reserve for downturns.

“I do not feel like we are as prepared as we were going into the last recession,” says Hinson, who stays at home to care for their seven children while her husband works in information technology. “Without the regular raises, we just can’t get ahead the way we used to. The economy isn’t keeping us up at night, but it definitely doesn’t make living terribly comfortable right now.”

She’s not alone. A nationwide Bankrate survey from June found that 25 percent of Americans who were adults at the time of the recession saw no improvement in their overall financial situation, while another near one-in-four say they’re worse off today than before the worst economic crisis in nearly 80 years hit.

That comes on the heels of the U.S. economic expansion surpassing its 11-year mark — the longest on record — at a time when traditional economic data generally paints a rosy picture about nationwide prosperity. Americans are left behind for a number of reasons, mainly due to stagnant wage growth and rising income inequality in the aftermath of the Great Recession.

How prepared are Americans for the next downturn?

But as cracks start to protrude in both the economic and financial system, it calls into question just how prepared Americans might be for the next downturn — and what a recession would mean for those who still feel like they’re recovering from 2008.

The yield curves for the 2-year and 10-year Treasury — a widely watched recession indicator — inverted last Wednesday for the first time since 2007, on fears about slowing growth. Rocky trade tensions between the U.S. and China, economic weakness in China and Europe, as well as a slowdown in business investment and trouble in manufacturing could also mean clouds are on the horizon. A probability model out of the Federal Reserve Bank of New York shows a greater than 30 percent chance that the U.S. economy will enter into a recession within the next 12 months.

“It’s not going to be like the crash of 2008, but it’s going to be a very difficult recovery,” says William Spriggs, professor of economics at Howard University who formerly worked at the Department of Labor under the Obama administration. “Having this many families in a precarious position is dangerous.”

Many Americans haven’t fully recovered from the wealth that they lost following the 2001 recession, let alone the Great Recession of 2007 to 2009, Spriggs says.

In 1999, median household income adjusted for inflation reached its peak of $60,062, according to the U.S. Census Bureau. It didn’t fully recover to its pre-recession level until 2016 — 17 years and two downturns later.

It’s a different story for the share of income that goes to laborers — or the percentage of economic output that workers inherit. Declines mean that wages are growing more slowly than productivity, and that’s exactly what’s happened following the 2001 downturn. Before the recession began in March of that year, the gauge peaked at 64.4 percent. It still hasn’t caught up, with workers now inheriting 57.1 percent.

The picture gets even bleaker when it comes to income inequality and loss of wealth. Household net worth increased by 17 percent between 2001 and 2007 — at which point it peaked at $139,700, according to the Federal Reserve’s triennial Survey of Consumer Finances, which subtracts each household’s total assets with its liabilities. But between 2007 and 2016, the most recent period for which data is available, household net worth fell by 30 percent to $97,300.

Earners in the top income bracket saw disproportionately more growth. Median household net worth increased by about 40 percent between 2013 and 2016 for those in the top income category, the Fed found. Meanwhile, those at the bottom saw their wealth increase by 6 percent over the same period. Income inequality widened to the most on record that year, a subsequent Pew Research Center analysis of the data found.

“Assuming it ends up being a typical recession, it’s going to be exaggerated in terms of a consumption decline, even from a mild drop in jobs, because of the lack of wage growth and income recovery,” Spriggs says.

That’s largely because of consumer spending, which makes up two-thirds of the U.S. economy. Theory suggests that, as the economy slows, firms start to cut positions. That causes the unemployment rate to rise. Along the way, individuals’ incomes decline or are interrupted, and they hit the brakes on spending. That causes demand to fall, and the cycle repeats itself.

During the 2008 crisis, consumers put their foot on the brakes immediately, Spriggs says. It was the most severe decline since World War II, according to an analysis from the Bureau of Labor and Statistics. It also took about three years for total inflation-adjusted personal consumption to get back to its previous, pre-recession peak, according to research from the Federal Reserve Bank of Chicago. Households lost about $13.6 trillion in wealth, the Chicago Fed found, which could explain the extent of which Americans cut back on their spending.

But the decline also has a lot to do with household wealth still not rebounding to its pre-2001 recession level, Spriggs says. It could also predict what might happen if the downturn comes before those Americans who haven’t yet recovered from the Great Recession are faced with another rough economic period.

“What’s going to happen, is well, part of what we know from 2008,” Spriggs says. “When families lack liquidity, they stop consuming immediately. They have to bring their books into balance.”

But the recovery could be harder from more than just an economic perspective. A downturn that arrives while nearly half of Americans are still recovering from the previous recession could have a devastating impact on their wallets, says Mark Hamrick, Bankrate’s senior economic analyst. Though it’s impossible to predict the extent, depth, duration or severity of the next downturn, generally more Americans could be at risk if their finances haven’t had the chance to catch up.

“For individuals who had the luxury of higher incomes and likely greater savings, they have a greater ability to weather the proverbial storm,” Hamrick says. “If they lack resources, such as sufficient savings, this can be devastating, putting their safety, shelter and even health at risk. After the expansion ends and a downturn begins, many Americans will fall behind or fail to make progress with their personal finances, although some will prevail and even thrive.”

Current expansion like ‘running on a treadmill,’ Hinson says

That’s a lesson Hinson has learned — she knows there are winners and losers in any economy.

She says half of the people she knows are better off than before the Great Recession, while one quarter are worse and the rest are about the same. She would lump her family into that third category. Before the downturn, her husband saw raises of at least 6 percent each year. Now, she’s lucky if he gets a 1 percent boost every 18 to 24 months.

“I’m not looking at it as if I can’t put food on my family’s table; I’m not in fear of losing my house,” Hinson says. “But you’re sitting in this kind of vague area: It’s good, but it could be better. We’re not really going anywhere. It’s like you’re running on a treadmill.”

With her family’s emergency savings already in use, Hinson said her family has already identified areas where they could cut back if a recession were to begin. They’d get rid of their second cell phone, or they’d consider selling one of their investment properties. Hinson said she’d also go back to work if it meant “keeping some of the niceties that my family likes.”

She would also plan to let go of her family’s maid, “but that means another person’s job is gone,” she says. “You start thinking about those things. A downturn really just multiplies itself.”

In downturns, that’s generally part of the problem. Households cut spending, they get rid of any outstanding debt as quickly as possible, and they increase their personal savings’ rate in response to loss of wealth, confidence and credit access. But when consumers spend freely, it circulates back into the economy. Their purchases directly support the firms selling those goods and services — and the people on their payrolls.

The Great Recession helped Hinson realize just how much of a devastation a downturn can be. Several of her husband’s colleagues were laid off, though his position was preserved during a company-wide restructuring.

It was a devastating time, she says, but she doesn’t know how much of a shock another downturn could be. It’s partially because she feels like she’s still living through one.

“Honestly, when we do experience the downturn, it isn’t going to be as catastrophic of an event because it doesn’t feel like such a great upturn,” Hinson says. “Nobody’s ever come out of that mindset. You’re already fighting as hard now.”

Families like the Hinson’s, who live in America’s heartland, may be one of the reasons why the Federal Reserve cut borrowing costs for the first time in more than a decade. Fed Chairman Jerome Powell indicated in his semiannual testimony to Congress that his colleagues want to “sustain the economic expansion” for as long as possible to ensure that all Americans experience more of its benefits. Regions such as rural America have been left behind by the expansion.

Only until recently has the expansion “started to reach communities at the edge of the workforce. It’s just so important for us to continue that process for a couple of years, and that’s why we’re so committed to using our tools to sustain the expansion,” Powell said. “We’re getting reasonable wage growth, but we missed all of those years at the beginning of the century. It’s a very serious problem, and we should do a better job of calling it out.”

How to brace for the next recession

If you’re one of the many Americans who still feels like you’re recovering from the last downturn, bracing for the next recession can seem like an impossible task. It’s critically important, however, to live beneath your means, Hamrick says.

“This requires resolve and financial discipline,” Hamrick says. “This is a timeless strategy helping individuals to leverage the benefits of normal or upbeat economic cycles and to be prepared for the inevitable downturn.”

Start by creating a household budget that takes your expenses, income and savings goals into consideration, he says. But it may also require some changes. Those include switching careers, moving to an area where the job market is stronger, finding a roommate or picking up a side job.

Use Bankrate’s tools and tips to find the right financial roadmap for you.

“For some, desperate times call for dramatic measures,” Hamrick says. “Just doing the same old thing over and over is not going to be part of a successful game plan for their personal finances.”