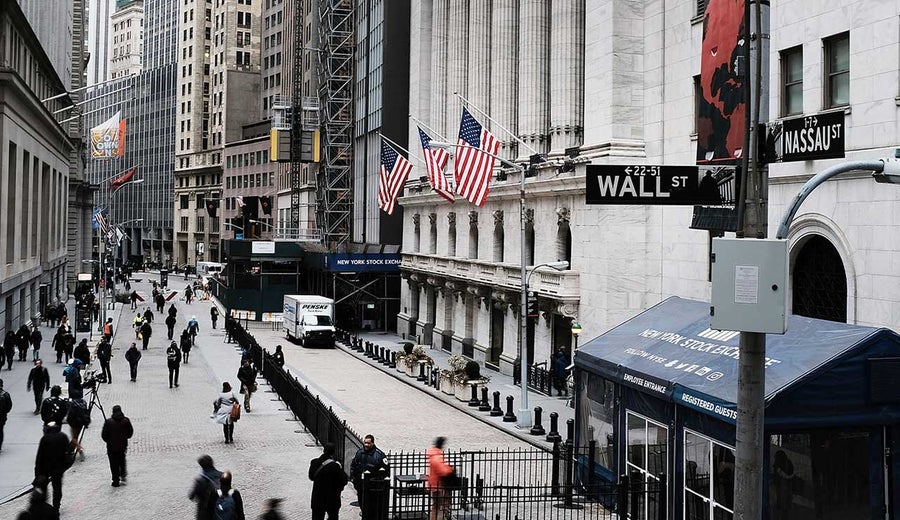 When stocks tanked at the end of January, Mike Brown decided to watch Netflix or flip to whatever game he could find on television.

He certainly wasn’t going to sell.

Brown, 24, has broad exposure to the market, especially for someone his age. He saves in a 401(k), trades tech stocks on the Robinhood platform and even owns some Ethereum, a lesser-known cryptocurrency.

“The market will almost always bounce back, and as an investor, my focus is on the long game, not the short,” says Brown, a Hoboken, New Jersey-area research analyst.

A financial planner couldn’t have put it better.

It turns out that Brown wasn’t alone. Only 6 percent of investors decided to sell because of the market correction that ran from Jan. 26 to Feb. 8, according to a new Bankrate survey, while 3 in 5 investors emulated Brown by intentionally doing nothing.

That’s especially remarkable given the amount of attention President Donald Trump gave stocks before the correction. In fact, 44 percent of investors were simply indifferent to the decline, compared with nearly a quarter who described themselves as fearful or sad.

While only 6 percent looked at the correction as a reason to sell, Bankrate’s survey found that 15 percent of investors decided to add equities to their portfolio.

The vast majority, though, were inert, as 60 percent decided to make no moves, while 1 in 6 weren’t aware there was a market downturn at all.

Everyday investors — as you might expect, given their inaction — didn’t particularly care about what was happening on Wall Street. In addition to those oblivious, 44 percent described themselves as indifferent. Meanwhile, 13 percent said they experienced fear, 11 percent felt sadness and 9 percent were excited.

Perhaps the Mike Browns of the world didn’t fret because the cause of the market dip was counterintuitive.

Investors experienced a collective freak-out after the January jobs report showed that worker’s pay perked up a bit more than expected. (Although average annual wage growth was still below pre-recession levels.)

While average Americans, many of whom are still recovering from the Great Recession, would rejoice at the prospect of higher pay, Wall Street types only saw the prospect of faster inflation, an increased number of Federal Reserve interest rate hikes, higher borrowing costs and slower economic growth.

The S&P 500 fell from about 2874 to 2581, the lowest point since November, while the yield on 10-year U.S. Treasuries jumped 20 basis points. (Bond prices and yields are inversely related.)

Since the beginning of February, however, cooler heads have prevailed.

Various inflation metrics, including February wage gains, lessened market observers’ fear of out-of-control price increases. The S&P 500 gained more than 6 percent since the recent nadir, while 10-year yields leveled off, all despite continued shake-ups in the White House and the potential for a trade war over Trump’s announced steel and aluminum tariffs.

“Despite the trade-war jab that followed the inflation and interest rate combination, the equity markets appear eager to shake off recent worries, press forward and regain the advantage by recouping the losses incurred in the recent correction,” says CFRA chief investment analyst Sam Stovall.

Saving for the long haul

Unfortunately, not enough people were subjected to the correction, according to the Bankrate survey.

Only 43 percent of Americans said they own any type of investment, such as a 401(k) or brokerage account, which dovetails with other findings.

Absent pensions, the only way most Americans will be able to afford retirement is to save at least 10 percent of their pay, including any employer match, in a tax-preferred retirement account, such as a 401(k) or IRA.

Those with retirement accounts, according to the Federal Reserve’s most recent data, only have a median of $60,000 saved. One rule of thumb is that you need 11 times your income stowed away.

While you may have avoided the worst of the correction, make sure you save in your 401(k) so you can enjoy decades and decades of future gains.

Bankrate.com commissioned YouGov Plc to conduct the survey. All figures, unless otherwise stated, are from YouGov Plc. Total sample size was 2,287 adults. Fieldwork was undertaken between Feb. 28–March 1, 2018. The survey was carried out online. The figures have been weighted and are representative of all U.S. adults (aged 18+).