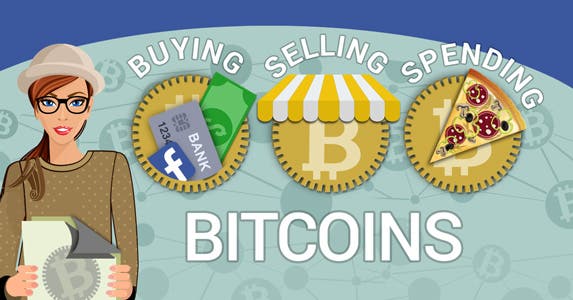 The controversial cryptocurrency, which exploded into public consciousness more than a year ago, is either on the verge of death or poised to go mainstream, depending on who’s doing the talking.

Bankrate wanted to dig into what bitcoin is and how it works.

Using a couple hundred bucks, I bought, sold and owned less than a quarter of one bitcoin. My goal was to see how easy it was to deal in a virtual currency, how much of my personal information I would have to share and what kinds of fees I would have to pay.

What I found: Bitcoin is far from being practical or easy to use for the everyday consumer, but it’s also not a shady, anonymous industry as some have described it. 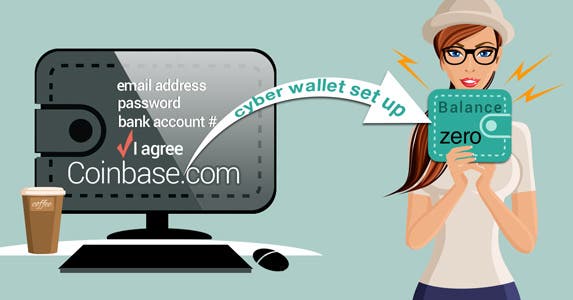 Set up a bitcoin wallet

My first stop was Coinbase, a platform for buying and selling bitcoin. It’s backed by several big names in Silicon Valley, including Silicon Valley-based venture capital firm Andreessen Horowitz, and is considered one of the more reputable and easy-to-use bitcoin sites.

I signed up for a bitcoin wallet with Coinbase, handing the company my email address and creating a password.

Similar to a physical wallet, a bitcoin wallet holds the private keys that allow you to spend or exchange bitcoin.

Using bitcoin may feel similar to online banking, but there are no government-backed guarantees like your money has in a bank. If your bitcoin gets stolen or the exchange or company holding your wallet goes under, there is not much you can do. (See: Mt. Gox. )

After signing up and accepting the user agreement that warned that holding or transacting in bitcoin was risky, it was time to buy some bitcoin.

Coinbase asks for personal details from prospective buyers and sellers of bitcoin, which takes some of the pseudonymity away from the cryptocurrency.

I handed over my bank account information and my phone number, but opted to wait for a deposit verification rather than give Coinbase my online banking login. For verification, Coinbase deposits small amounts of money into your bank account to ensure it’s a real account. 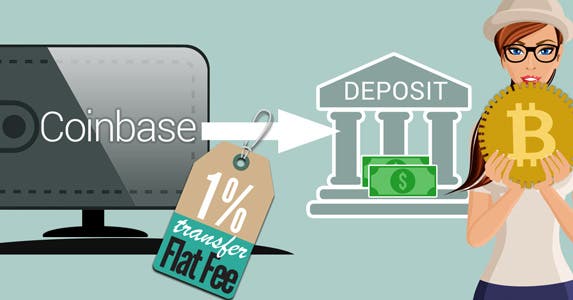 The next day, my bank account had two small deposits from Coinbase, so I logged back in, input the amounts for verification and decided to buy a fifth of a bitcoin, using more than half of my $200.

You can buy pieces of a bitcoin. The smallest fraction that currently can be sent is a one-hundred millionth of a bitcoin, which is called a Satoshi after the supposed founder of bitcoin, Satoshi Nakamoto.

Coinbase charges a 1 percent fee, as well as a small bank transfer fee.

Did I give Coinbase my credit card information as backup? I decided against it. That meant more waiting. As a result, it took me several days before I received the bitcoin I had paid for. 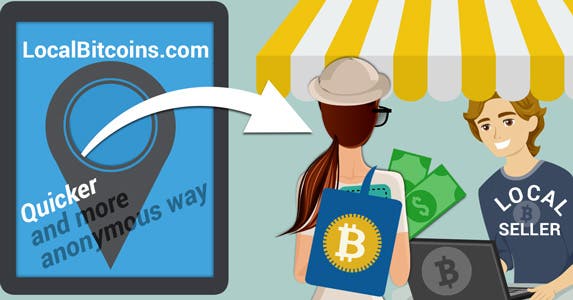 I went looking for another way to buy bitcoin, preferably a quicker and more anonymous way.

I went to LocalBitcoins.com, which connects nearby bitcoin buyers and sellers. I opted for an in-person cash transaction and offered to buy from someone named eric101995, who agreed to sell me a tenth of a bitcoin for $67.25.

I arrived at the rendezvous site, Barnes & Noble, with a transaction verify code and my cash.

Eric101995 turned out to be a friendly high school student. He got on his computer and released the 0.1 bitcoin to my digital wallet, then showed me the same transaction verify code to prove the bitcoin had been transferred.

I handed him my cash. No sharing bank account information or credit cards. Just a simple cash transaction and I had my first bitcoin. 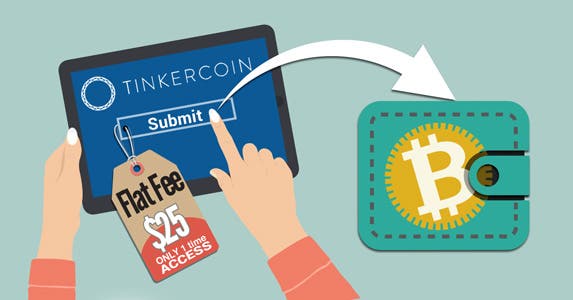 Tinker with a bitcoin purchase

With the last few dollars I had, I turned to Tinkercoin, a startup in Canada that aimed to introduce bitcoin to new users.

Its premise was simple: People could buy their first bitcoin using a credit card, “just like anything else on the Internet,” according to the website. The company would set up a bitcoin wallet for you, but you could buy from Tinkercoin only once.

When I signed up, I had to provide my Facebook account, and credit card and cellphone numbers. 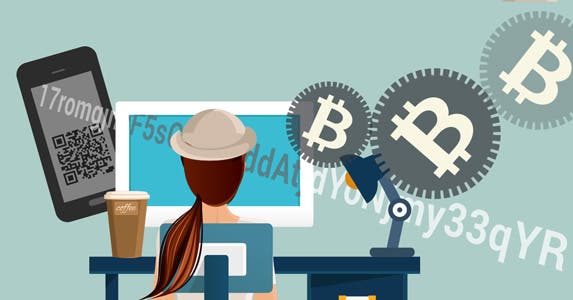 Bitcoin is virtual and has no physical form. When you see pictures of them, those are circular pieces of metal with a bitcoin address printed on them and a private hidden key inside. They are minted by a guy in Utah and are just for show.

To be sure, the mechanics of real bitcoin can get complicated quickly, but sites like Coinbase aim to make transactions simpler for buyers and sellers.

Indeed, transferring bitcoin was surprisingly easy, given how complicated the process has been described in the media. If anything, moving bitcoin into or out of your wallet is a bit like sending an email.

To send someone bitcoin, you need their bitcoin address — a string of letters and numbers. Similarly, if you want someone to send you a bitcoin, you share your address with them. They also can get your address by scanning the QR code with their smartphone.

Here’s an example of a bitcoin address: 17romgjnsF5sGU3YkddAtjdYoNjmy33qYR

If you take that address to a site called Blockchain.info, you can see that I used it to transfer the 0.1 bitcoin from LocalBitcoins and the 0.02967667 bitcoin from Tinkercoin into my wallet on Coinbase. 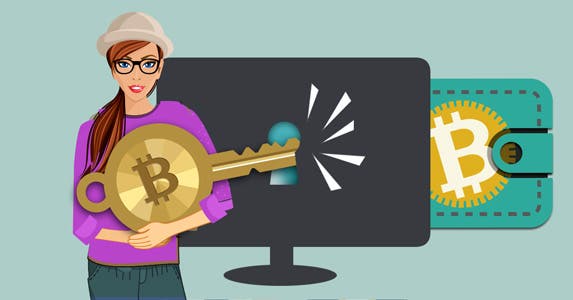 Keys to unlock your bitcoin transaction

Sites like Coinbase are working to make it easier for people to trade in bitcoin.

To transfer bitcoin, a private key and a public key must be used in conjunction. Every bitcoin address, or the coded public key, has a matching private key, and that key is needed to unlock your bitcoin transaction.

Instead of worrying about remembering your private keys or keeping them safe, Coinbase solves that for you. You log in to Coinbase, just as you would log in to your online banking page.

“It takes away the user from having to be tech-proficient,” says Kashmir Hill, a senior editor at Forbes who wrote “Secret Money: Living on Bitcoin in the Real World,” a book about her experience living only on bitcoin for a week.

“If somebody who is not tech-savvy wants to be involved in bitcoin, it’s a lot like opening a normal bank account,” she says. 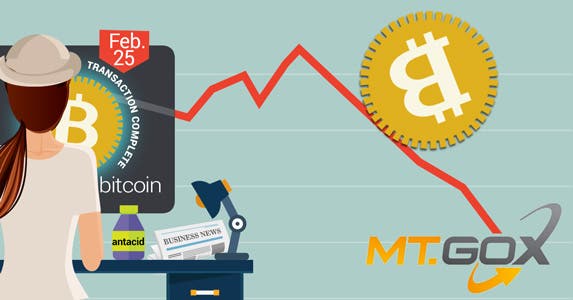 The market can be volatile

Just as I was about to buy bitcoin, a series of revelations and news events shook its price.

The biggest came in February when the major trading exchange Mt. Gox suspended bitcoin withdrawals to address a technical issue. Mt. Gox had lost a significant number of bitcoins and questions arose about the management of Mt. Gox, which went offline on Feb. 25.

During this saga, bitcoin’s value dropped from the $800 range to the $500 range. The same day Mt. Gox went offline, I bought my first bit of bitcoin. 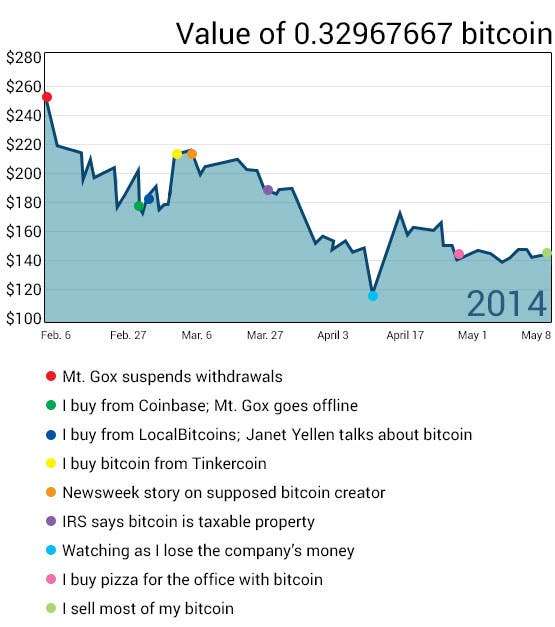 Watching the price fluctuations of bitcoins can cause even seasoned investors to need antacids. In December 2013, the price jumped to around $1,200 before falling that same month to under $600.

So it was not much of a surprise that after briefly watching my bitcoin actually make a little money, it soon had lost a quarter of its value. 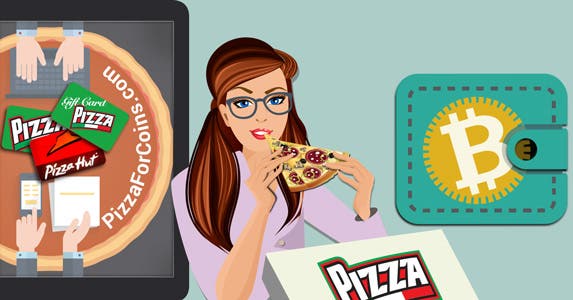 After watching my bitcoin lose money for a couple months, I decided to eat some of my losses. Literally.

I found a site called PizzaForCoins.com. It allows people to order pizza from companies like Papa John’s, Domino’s and Pizza Hut using bitcoins, says co-founder Riley Alexander. The company generally receives at least one order per day and sometimes as many as 20.

Everything on the PizzaForCoins site is listed in bitcoins. Two medium, two-topping pizzas cost 0.035 bitcoin. Making the pizzas pan-style costs an additional tenth of a bitcoin.

After I ordered six pizzas, the site gave a bitcoin address where I could pay. I put in the address and transferred 0.112 bitcoin, or the equivalent of $49.31.

Despite being connected to a high-tech innovation like bitcoin, the PizzaForCoins ordering process relies a lot on manual intervention.

Once I placed my order with PizzaForCoins, Alexander or his partner Matt Burkinshaw placed the order on Domino’s website.

PizzaForCoins buys thousands of dollars in gift cards for Domino’s, Pizza Hut and Papa John’s, using them to order the pizza.

The company takes only a $1.95 fee per order. The same order on the Domino’s website was $47.36 with taxes and delivery charge, or about the same as PizzaForCoins minus the bitcoin fee. But even with PizzaForCoins, you have to shell out some U.S. dollars to tip the delivery guy. 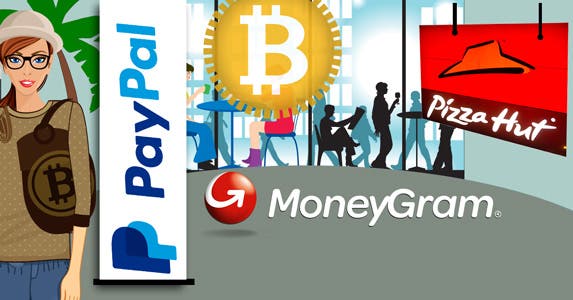 Alexander says he learned about bitcoin in October 2012. At the time, there were few places that accepted bitcoins.

“We made people realize that you can use (bitcoins) to buy something quickly,” he says. “There is still a lot to be desired in ease of use for the everyday consumer.”

Forbes’ Hill tried in May 2013 to live on bitcoin for a week. She survived but struggled, having to cope without coffee during that time and even having to change apartments because her landlord at the time wouldn’t accept payment in bitcoins.

A year later, Hill redid her experiment. It’s still tough to live on bitcoins, but it’s a little easier now that more companies accept the cryptocurrency.

“It’s not designed to be used the way I’m using it,” Hill says. “There are many places in the world where it will be very difficult to live on bitcoins.”

Hill says one exciting part of bitcoin is that it bucks the traditional payments system.

She says bitcoin allows users to circumvent third-party intermediaries such as banks, PayPal, MoneyGram or Western Union that could slow down transfers or add fees. And, it provides an opportunity for transactions to be more secure and private. 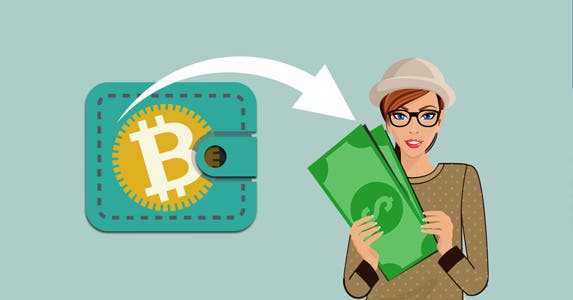 Turning bitcoin back into dollars

Even if you can transfer bitcoins easily and even buy pizza with it, how easy is it to turn bitcoins back into dollars?

Indeed, after I sold off my bitcoin in May, bitcoin surged. At one point, my remaining 0.01 bitcoin was worth as much as $6.59.

Since then, a bitcoin company has announced sponsorship of a college bowl game, and the U.S. government has said it will sell nearly 30,000 bitcoins it seized in FBI crackdowns of the online black market Silk Road.

In short: Expect to see more interest in bitcoin in the coming months. As more businesses, consumers and investors use the crytocurrency, bitcoin adventures like mine will become easier. Until then, it’s not a bad idea to keep some boring greenbacks around.

For more, see “What I learned from buying and selling bitcoins.”

More On Bitcoin And Investing: