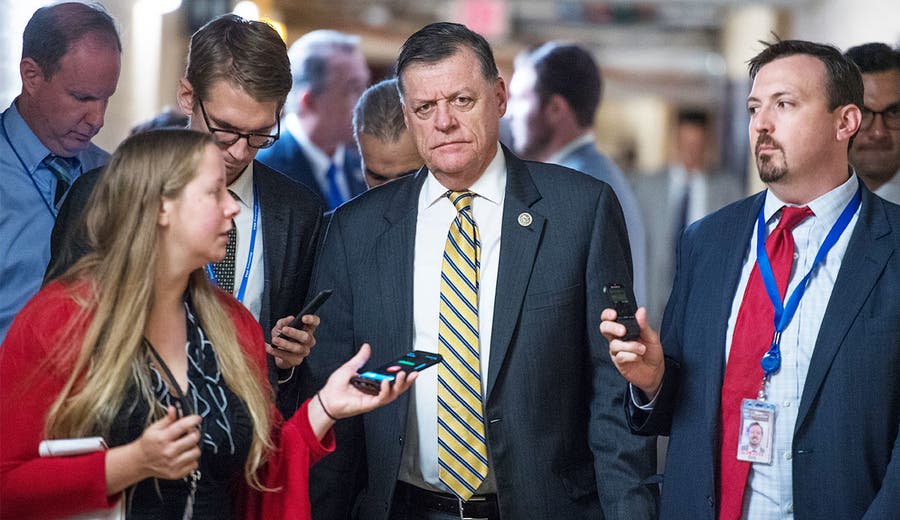 You should be scared – at least a little bit.

The coming battle between Republicans on Capitol Hill and Republicans in the White House over how and when to lift the nation’s debt ceiling could roil your portfolio, if not cast financial markets around the globe into disarray. This may be a good time to make sure you have some money in safer investments, such as CDs.

All signs point to rough negotiations over the debt limit when Congress returns in September.

And yes, you have seen this movie before.

In case you forgot

When the federal government runs a deficit and needs to borrow money, it generally issues U.S. Treasury bonds to make up the difference between what it collects in revenue and spends on services. Ever since World War I, Congress has set a limit on Treasury borrowing. That limit — or debt ceiling — has always been raised once it’s hit.

In July 2011, the Treasury was set to run out of its ability to borrow money. Newly ascendant congressional Republicans, led by the tea party, used that deadline to push an agenda featuring massive spending cuts. And, they threatened to not pass a debt ceiling increase unless it was tied to their budget proposals.

The debt limit, after all, doesn’t actually appropriate money, but rather allows the government to borrow money to pay for the things Congress has already approved.

No deals could be reached, and market observers were frightened. President Barack Obama gave a prime-time speech and described the gambit as “a dangerous game that we’ve never played before.”

Just ahead of an Aug. 2 deadline, the two sides compromised and the ceiling was lifted, narrowly averting a fiscal disaster.

But the fight was not without damage.

The S&P 500 stock index fell 14.3 percent from July 2011 to September that year. And, Standard & Poor’s lowered the nation’s credit rating, citing political dysfunction. As a result, a U.S. Government Accountability Office report found that the fight increased borrowing costs for the federal government by $1.3 billion that fiscal year.

There were expectations that consumers would be hit with higher interest rates, but that didn’t happen.

The thinking was: Who would want to buy U.S. government debt if Congress might arbitrarily decide not to pay it? But investors actually bought more U.S. debt, because they didn’t know where else to park their cash in a time of uncertainty. So bond prices went up, and yields — which influence mortgage rates and other interest rates paid by consumers — went down. (Bond prices and yields are inversely related.)

The risks this time

When summer recess ends and the current Congress heads back to Washington next month, the most conservative lawmakers — members of the House Freedom Caucus – are poised to use the debt limit debate to make a new push for significant spending cuts.

Prepare yourself for stock market declines as the drama heats up. You may be lulled into a false sense of tranquility given the market’s current lack of volatility. It’s important to stay invested – you don’t want to try to time events – but realize that some declines are inevitable from time to time.

If the debt limit isn’t raised, investors may sell Treasury bonds, pushing up their yields. That could raise the borrowing costs for mortgages and credit cards.

But in today’s political climate, anything seems possible — especially given a statement by one particularly prominent politician.

I cannot believe the Republicans are extending the debt ceiling—I am a Republican & I am embarrassed!

“I cannot believe the Republicans are extending the debt ceiling — I am a Republican & I am embarrassed!”