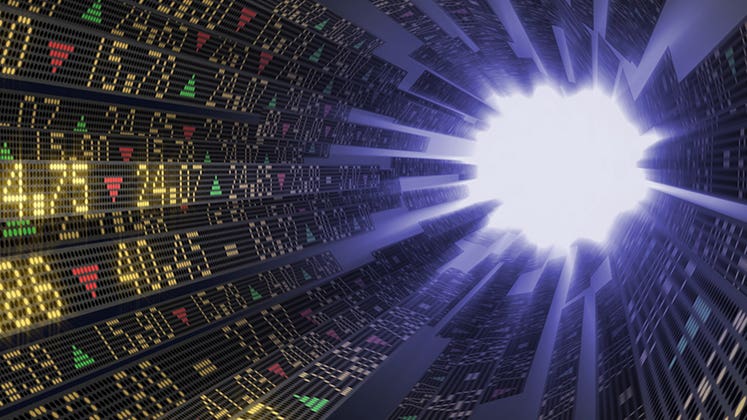 Ever since the Federal Reserve effectively dropped the federal funds rate to zero in December 2008, investors have lived in apprehension of the day rates will go up. Bond prices move in the opposite direction from interest rates, so most experts recommend that investors avoid long-term bonds like the plague.

What about stocks? Is the stock market likely to get hammered with rising interest rates?

Some types of stocks have more interest rate sensitivity than others. They behave more like bonds and will likely see a drop in price as rates move up.

But other parts of the stock market would likely only tumble if rates moved contrary to expectations.

One scenario: “If rates rise faster than expected. Then if that happened the stock market would move in a negative manner,” says Steven Lifland, Ph.D., professor of finance at High Point University in High Point, North Carolina.

Disinflation and sluggish economic growth have been concerns of the central bank for years. In the context of the weak economic recovery, rising interest rates could actually be a good thing.

The initial steps of an economic expansion have historically been good for stock prices. When the economy begins to run too hot and prices increase too rapidly, the Fed would move to slow economic growth through monetary policy, which could put a lid on stock market growth.

For now, “If rates are going up because the Fed is seeing a stronger economy, that should influence stock prices to the positive,” Lifland says.

What should investors do?

A diversified all-weather portfolio that will theoretically thrive in all types of economic environments is the general answer to market-timing conundrums.

“It’s tough to time to the stock market based on the forecasting of business cycles or interest rate cycles. If you are set up to be a buy and hold — with rebalancing — there isn’t a need to try to forecast and time the interest rate markets,” says CFP professional Jeffery Nauta, CFA, principal at Henrickson Nauta Wealth Advisors in Belmont, Michigan.

But the past five years have really been a whole different ball game for fixed-income investors. Thanks to the Fed’s low interest rate policy, many bond investors have been forced to find riskier assets. Rather than playing it safe with Treasury securities or investment-grade corporate bonds, traditional fixed-income investors have moved up the risk ladder to dividend-paying stocks and other investments that pay a high dividend, such as master limited partnerships, or MLPs, and real estate investment trusts, or REITs.

“If you have reached for yield the last few years and gone into utilities and high-dividend-paying stocks that are interest rate-sensitive, maybe bring (your portfolio) back in line with a diversified total return approach,” says Nauta.

Investing in utility stocks is sometimes viewed as a defensive move. For instance, when the economy is contracting, investors may be drawn to the stability that utilities represent. In an expanding economy, utilities are the investment equivalent of a swing set at an amusement park: Sure it’s great when it’s the only game in town, but compared to high-octane rides, well, it’s just a little lackluster.

“Their business model is such that there are high barriers to entry. They are a very stable company. The give-up on that is that you don’t expect high capital-gain returns from utilities. But they do pay a high and stable dividend,” says Nauta.

While utility stocks are at the far end of the spectrum for stocks that act like bonds — the poster child for that designation, according to Nauta — other types of investments are sensitive to interest rate movements.

For instance, some REITs and MLPs can react to interest rate moves. “And also some of the preferred stocks, those are going to have an interest rate sensitivity to them,” says Nauta.

When interest rates increase, the price of preferred stocks can go down. That’s due to their hybrid structure; they’re set up like a cross between a stock and a bond.

Broadly speaking, a few different types of companies benefit from an economic uptick.

Wells Fargo’s Wren posits that businesses that thrive in a rising rate environment, such as information technology and industrials, have a few more years to flourish.

“The cyclical market still has two or three years to run in those sectors and industries that are more sensitive to the ebb and flow of the economy,” he says.

Interest rate increases by the central bank will begin to have a slowing impact on the economy. Most prognosticators believe the central bank is still a long way from hitting the brakes significantly.