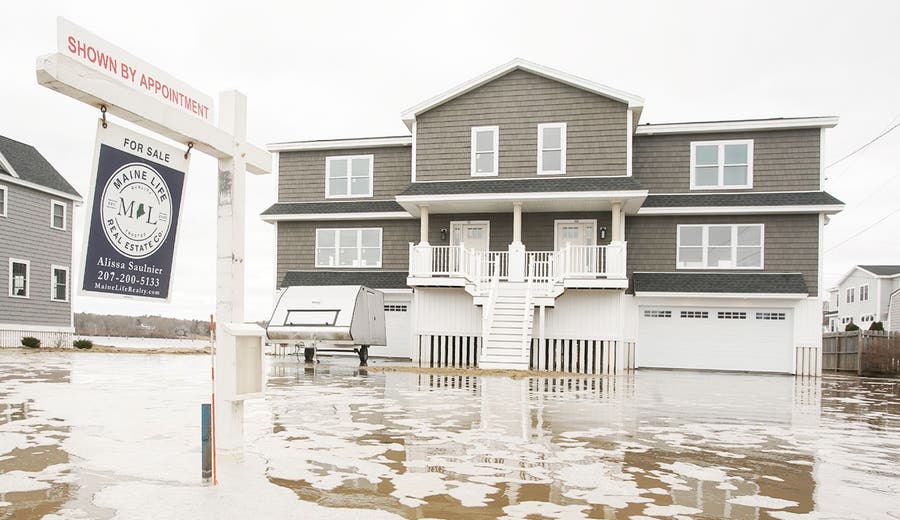 From beachfront condos to landlocked subdivisions, flood zones are everywhere. In fact, almost 41 million Americans live in flood zones, according to a study published in the journal Environmental Research Letter.

Just a couple months into the official start of hurricane season, which runs from June 1 to November 30, many people in storm-prone areas are mindful of the destruction flooding can cause.

Last year served as a major wake-up call in disaster preparedness. Three Category 4 hurricanes made landfall in one season, and Hurricane Harvey broke records for the most rainfall from a U.S. cyclone, measuring 50 inches in some areas. The National Flood Insurance Program, or NFIP, paid more than $8 billion to flood insurance policyholders in 2017 alone. 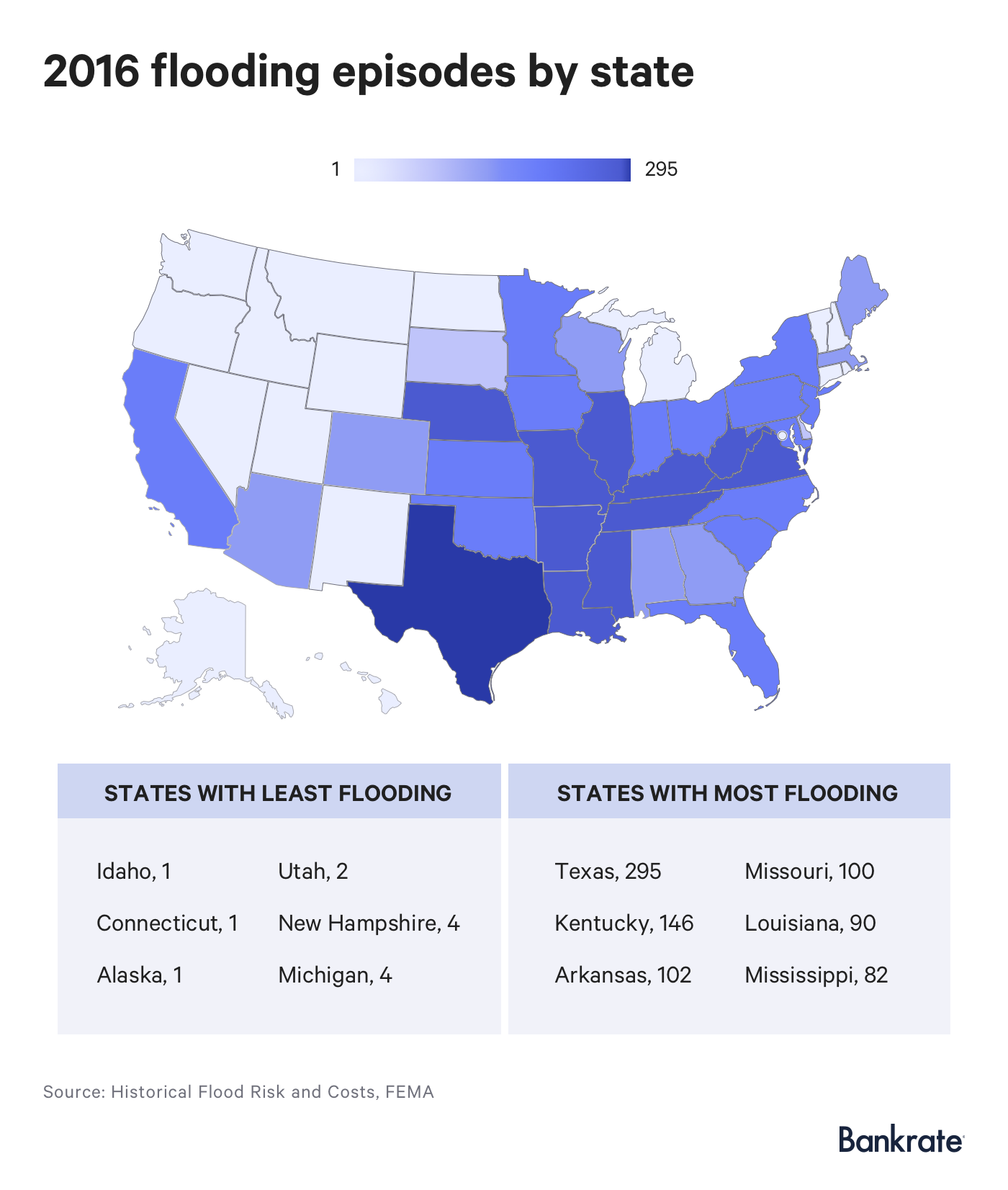 Here’s five important things homebuyers should know before they buy in a flood zone.

Those who live in high-risk flood zones, designated with the letters A or V on a flood insurance rate map or FIRM, are usually required by their mortgage lenders to purchase flood insurance. Flood coverage is separate from standard homeowners insurance.

Homes located in high-risk zones require an elevation certificate, or EC. The EC shows what your home’s elevation is in relation to how high floodwaters will reach in the event of a major storm. This gives insurance companies an idea of how much risk is involved, which will help determine your premium.

Sellers usually pick up the cost for the EC, which entails a surveyor coming to the property to measure the elevation, says Louise Rocco with Exit Bayshore Realty in Tampa.

2. The NFIP may be on soggy ground

The issue of flood insurance stood out in stark relief in July 2018 when the NFIP was set to expire. The federal program enacted in 1968 helps offset insurance costs for homeowners who are required to purchase flood insurance. Congress passed legislation which was signed by the president, in the eleventh hour, for a four-month extension to the NFIP.

The coverage can be expensive for people in high-risk zones, especially since insurance costs rose 8 percent this year. Premiums through the National Flood Insurance Policy started rising in April, bringing the average annual amount, including surcharges, to $1,062.

In Fremont, Nebraska, where the ground is pancake-flat, many neighborhoods are susceptible to flooding because of extremely slow stormwater runoff. Jennifer Bixby, president of Don Peterson & Associates in Fremont, says residents depend on the NFIP.

For some, the extra money spent on insurance is not worth it.

“A lot of buyers don’t want to spend the money on extra insurance. I know one woman who was paying $5,000 per year on flood insurance. You have to make sure you can afford it and you’re willing to pay it,” says Bixby.

3. If you’re not in a flood zone, you’ll pay less for insurance

Even if you’re not required to get flood insurance by your lender, you still might want to consider it. For homes that are near high-risk areas, insurance could be a lifesaver.

“Flood insurance is a bargain when you consider the potential loss. One foot of water in an average home can cause $72,000 worth of damage,” says Chris Orrock, public information officer with the California Department of Water Resources.

Pro Tip: Don’t wait for an approaching storm to get insurance. Most flood insurance policies have a 30-day waiting period before coverage is activated.

NFIP claims by residents who lived outside of those high-risk zones accounted for more than 20 percent of all NFIP claims filed. These folks received one-third of federal disaster assistance for flooding.

For people not in high-risk flood zones, the cost of insurance is more affordable.

The NFIP’s Preferred Risk Policy program offers low-cost policies for homes that have a low to moderate flood risk. These are designated by B, C, or X zones on a FIRM.

For example, $250,000 worth of coverage, on a house with a basement, costs $386 per year. For a little more than a dollar a day, this could be the best investment you make all year, says Orrock.

Flood insurance rates are based on several factors, according to the NFIP, including:

4. To understand the flood risk, ask before you buy

Experts agree that if it rains, it can flood. In fact, 98 percent of U.S. counties have been impacted by a flooding event. Even one of the driest spots in America, Death Valley, has had dangerous flash floods.

Before buying a home in a flood zone, it’s important to understand how much risk you’ll be assuming.

Flood zone information is usually in the MLS listing. Issues like drainage or flooding problems must be disclosed.

“Sellers are obligated to disclose information related to flooding, such as whether or not the property flooded before,” says Bixby.

People who are in the highest-risk areas will pay more for insurance, so this is something to consider when you’re house hunting. Buyers should talk to their lenders about any contingencies associated with buying in a flood zone.

“Some lenders might require you to pay a year’s worth of flood insurance upfront,” says Rocco.

Find out your flood zone designation

Low-risk zones are X and C. Sometimes X zones will be shaded, which indicates that a barrier, like a levy or dam, has been built to reduce the flood risk. Of course, these structures are not a guarantee that flooding won’t occur.

“If you’re protected by a levy, even if it meets FEMA standards, there’s a 25 percent chance during the life of your mortgage, about 30 years, that it will fail,” says Orrock.

If you fall in love with a property, but want to mitigate flood hazards, you can always make changes that will help reduce flood damage. These modifications can be major structural changes or small tweaks, from putting the structure on stilts to adding concrete blocks under your water heater.

Talk to your agent about negotiating the costs of these flood-mitigating updates with the seller.

“You can elevate the building to make sure water isn’t coming in. You can even raise it so that the lowest floor is above flood level,” says Nick Ratliff, associate broker with Better Homes and Gardens Real Estate Cypress in Lexington, Kentucky. “These are things you can talk to your agent about if you’re in a flood zone.”

Depending on your prospective home’s level of risk, small changes can make a big difference. A rule of thumb is to make sure water is flowing away from the home, not gathering in pools.

For example, make sure downspouts are facing away from the structure. Gutter runoff should’t collect near the house, which could eventually cause leaks in your basement. If you see this, address it with your agent or the seller.

“Check the pipes and gutters. Make sure they’re clean. Place air conditioner units on concrete blocks, above flood level. This will help protect your home and appliances,” says Rocco.