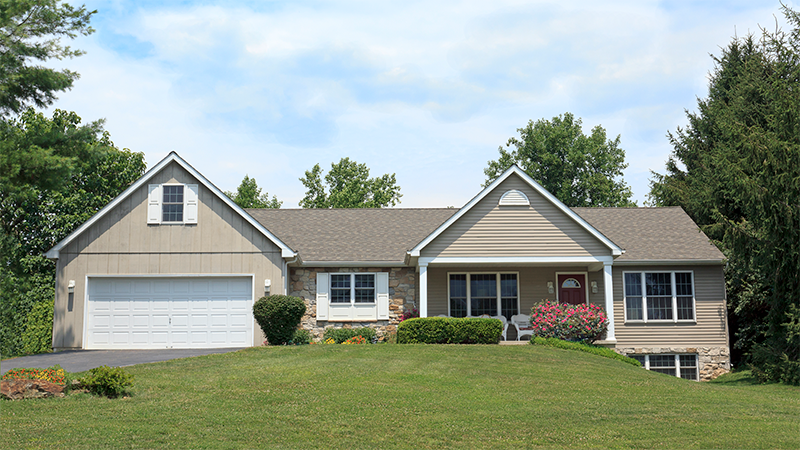 Cynthia Paez Bowman
Edited By
Mariah Posey
Edited by
Mariah Posey
Insurance Editor
Mariah Posey is an insurance writer and editor for Bankrate.com specializing in auto and home insurance. She aims to make the insurance journey as convenient as possible by…

Pennsylvania has a high homeownership rate, with nearly 70% of the state’s residents owning their home, benefiting from a relatively low median home value of $180,200. Plus, the average cost of home insurance in Pennsylvania is $730 per year for $250,000 in dwelling coverage. That is about $61 per month to protect one of the most important investments you will make in your life.

The following five carriers are among the top Pennsylvania homeowners insurance companies by market share. You will find that annual premiums can vary for the same level of coverage from one insurance company to another. For this reason, we have included multiple rates for comparison, as provided by Quadrant Information Services.

*Due to membership eligibility restrictions, USAA is not eligible for official rankings by J.D. Power.

Allstate received above-average ratings in the J.D. Power 2020 U.S. Home Insurance Study for customer satisfaction. It may be partly due to their dedicated local agents — Allstate has offices in 251 cities and towns across Pennsylvania. Allstate offers typical standard property insurance coverages, with several add-on options. The national insurer also offers an extensive variety of discounts, some as simple as just being a new customer and buying a new home, enabling homeowners to save on their premium.

While Chubb only scored around average on the J.D. Power 2020 U.S. Home Insurance Study, the global insurer did exceedingly well in the J.D. Power’s 2021 U.S. Property Claims Satisfaction Study, earning a score of 896 out of 1,000 and finishing third amongst all U.S. property insurers. Its rates are not the cheapest in the state, but the carrier specializes in feature-rich home insurance for higher-value properties and is an excellent option for high-net-worth homeowners in Pennsylvania who are in search of robust home insurance coverage.

Because Erie Insurance is a Pennsylvania-based super-regional insurer, it makes sense that it would be one of the state’s top-rated home insurers. Founded in 1925, Erie currently has offices in eight cities, including Pittsburgh, Philadelphia, Allentown and Harrisburg. The company maintains an A+ (Superior) financial strength rating from AM Best, indicating its sound financial position.

As one of the leading U.S. home insurers, State Farm may be a great option to consider in Pennsylvania. This major insurer offers almost every type of insurance product you might need – including auto, home, life, boat and motorcycle insurance – and offers the opportunity to bundle and save by having multiple policies written with them. Best of all, there are State Farm agents in 400 Pennsylvania communities, ready to provide local, personal service.

USAA scored the highest in J.D. Power’s ratings across all categories for customer satisfaction, though it is not eligible for ranking due to its membership-based policies. USAA provides typical standard home insurance coverages and add-ons that customers can choose from. Additionally, USAA policies include most weather-related damages and identity theft. However, only active or former military and their families have access to USAA’s insurance policies and exclusive benefits. Active personnel and family stationed at one of the two Army or two Navy bases in Pennsylvania may instantly qualify for USAA membership. However, veterans and retired members of the Armed Forces can also join.

How much is homeowners insurance in Pennsylvania?

The average homeowners insurance policy in Pennsylvania costs just $730 per year for $250,000 in dwelling coverage. This is significantly lower compared to the national average annual premium of $1,312 and the cost of coverage in neighboring states such as New York at $987 annually and Maryland at $1,124 annually. Low insurance premiums in Pennsylvania are partially the result of the commonwealth’s low average home value.

Common causes of loss in Pennsylvania

Homeowners insurance companies in the state of Pennsylvania incurred nearly $1.5 billion in losses in 2019, according to the Insurance Information Institute (Triple-I). Pennsylvania has numerous perils and hazards homeowners should be prepared for. When shopping for home insurance, consider the following perils that are most common across the state:

There may also be additional perils that are not covered by a standard Pennsylvania homeowners insurance policy and may require additional coverage. Consider speaking to your insurance professional to make sure you are covered against common perils in your area.

Residents of the Keystone State should consider home insurance add-ons that protect their property and belongings against the state’s unique perils. Some coverages Pennsylvania homeowners might consider include:

What is the best homeowners insurance in Pennsylvania?

Allstate, Chubb, Erie, State Farm and USAA are among the best Pennsylvania homeowners insurance companies, according to Bankrate’s analysis. To find out which is the best option for you, you could compare coverage options and prices from several companies, including the ones on our list. The Triple-I recommends obtaining a minimum of three quotes when shopping for home insurance.

How do I get homeowners insurance in Pennsylvania?

You can get home insurance in Pennsylvania by working with a local agent or purchasing a policy directly from an insurance carrier.

What are the most common causes of home insurance claims in Pennsylvania?

Floods, fires, windstorms, lightning and vandalism are among the leading causes of Pennsylvania homeowners insurance losses.

Flooding is not typically covered by standard Pennsylvania homeowners insurance policies. However, you could ask your insurance professional about options to purchase a separate flood insurance policy.

What is the difference between dwelling and personal property?

Dwelling coverage refers to the structure and exterior of the home (often referred to as the “four walls”). Personal property refers to your belongings, such as electronics, furniture, clothing and more.

Bankrate utilizes Quadrant Information Services to analyze 2021 rates for all ZIP codes and carriers in all 50 states and Washington, D.C. Quoted rates are based on 40-year-old male and female homeowners with a clean claim history, good credit and the following coverage limits:

The homeowners also have a $1,000 deductible and a separate wind and hail deductible (if required).

These are sample rates and should be used for comparative purposes only. Your quotes will differ.

Cynthia Paez Bowman is a finance and business journalist who has been featured in Bankrate, Business Jet Traveler, MSN, CheatSheet.com, Freshome.com and TheSimpleDollar.com. She regularly travels to Africa and the Middle East to consult with women’s NGOs about small business development and works with select startups and women-owned businesses to provide growth and visibility.
Edited by
Mariah Posey
Insurance Editor