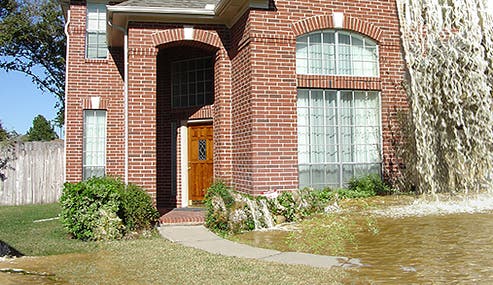 It’s reasonable to wonder if and how climate change might one day affect your home insurance.

But don’t expect enlightenment from America’s property and casualty insurance industry, which has remained tight-lipped on the topic thus far, at least in public.

“They’re making a political decision that they don’t have anything to gain by joining into the debate on climate change,” says Peter Kochenburger, insurance law professor at the University of Connecticut. “Why get involved in a public debate that is going to alienate some policyholders and some regulators, no matter what you say?”

Frank Nutter, president of the Reinsurance Association of America, a Washington, D.C.-based trade group that represents global firms that insure insurance companies, says there’s a perfectly valid reason why property insurers are hesitant to weigh in.

“They have no particular role relating to energy policy,” he says. “They’re comfortable discussing extreme weather; they just don’t engage in the congressional or public debate about energy policy.”

Behind the scenes, however, insurers and climate scientists have been busy trying to place two decades of catastrophic events — from Hurricane Andrew in 1992 to the 2005 “sister” hurricanes Katrina, Rita and Wilma to the destructive 2012 outlier, Superstorm Sandy — into a new historical context.

A threat to the bottom line

You won’t find many climate change doubters these days within the property insurance business, says David Kodama, senior director of research and policy analysis for the Property Casualty Insurers Association of America, or PCI.

“The industry has acknowledged that the severity in terms of the economic cost they’re seeing is definitely increasing,” he says. “That’s hit their bottom lines, and they’re being reminded of that by the regulatory community as well as the rating agencies that evaluate their financial strength.”

The issues for insurers

But they’re not quite sure what to do about their new reality. Property insurers now wrestle with a combination of issues, old and new, that together obscure a clear path ahead with regard to climate change, including:

Not just sitting on their hands

None of this should suggest that insurers are sitting back placidly as extreme weather becomes a kind of new normal. Some insurance companies are quietly taking steps to try to reduce their exposure to issues related to climate change.

So far, climate change hasn’t put too much heat on home insurance premiums.

“Far from signaling a crisis, we’re seeing some stability of pricing,” says Kodama. That’s being aided, says Nutter, by the competitive global reinsurance market, where prices are down 10 percent to 15 percent despite a horrible climatic year overseas.

While market dynamics may be working in the consumer’s favor today, there’s lingering concern that government, state regulators and insurers have yet to chart a coordinated course toward dealing with catastrophic natural disasters to come.

“The insurance business model is largely a retrospective one, looking at historical data and trending it forward,” says Nutter. “Today, you have a conflict between the business of pricing insurance and the future. Most insurers are trying to price policies using historical data for the next year, not 15 or 20 or 50 years from now. If, in fact, the climate is changing, then the past is not prologue for the future.”