There’s a reason health care has turned into a major issue for the 2018 campaign season: Americans are fearful.

The rising cost of health insurance and efforts by Republicans in Washington to undercut protections for pre-existing conditions and the Affordable Care Act writ large have left many financially insecure and worried over what the future may bring.

In millions of American households, people in need of medical care avoided a doctor visit in the past year because they worried was too costly, according to a new Bankrate survey. 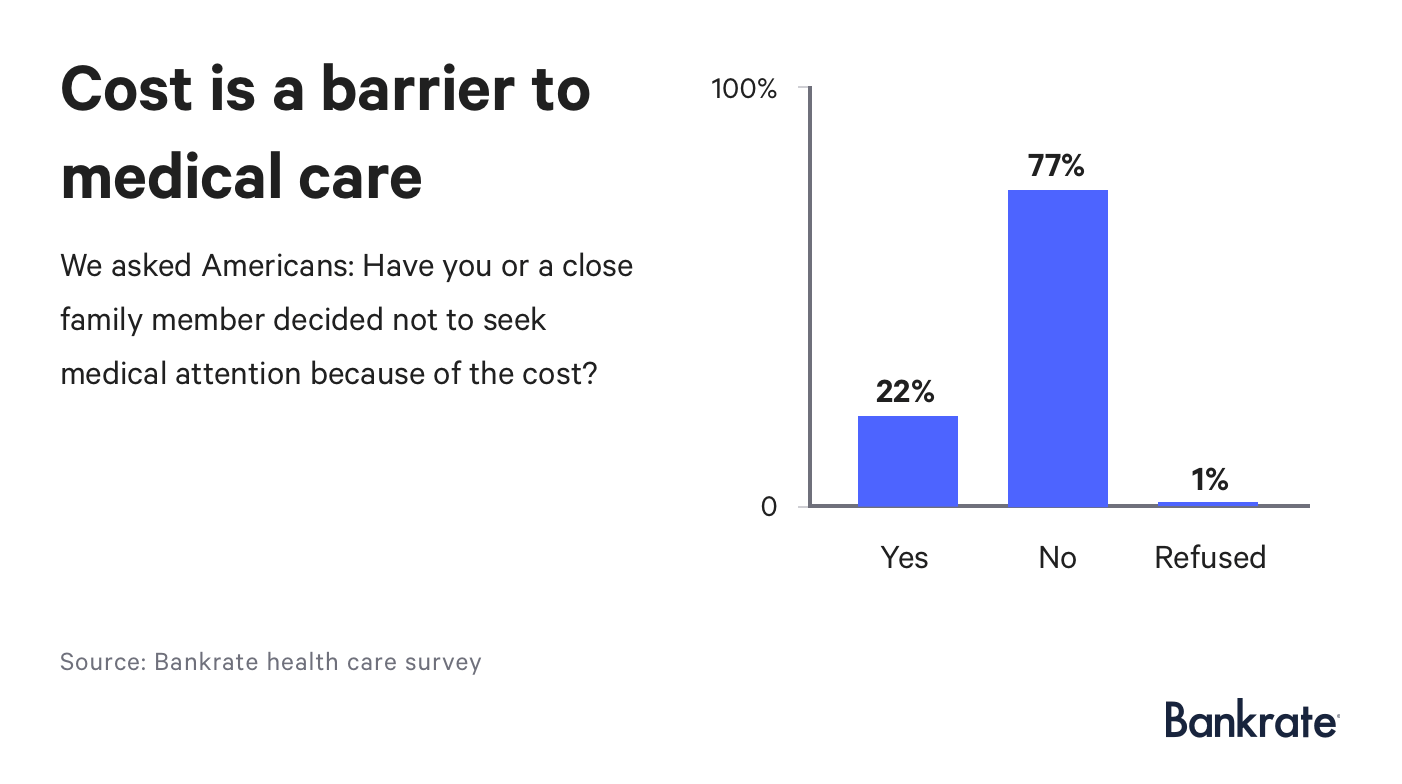 Meanwhile, 41 percent of those who sought out care were surprised at how expensive their bill turned out to be. More than half of respondents are worried they won’t have access to affordable coverage in the years to come.

And women feel this pressure more acutely than men.

As summer gives way to the midterm elections in November, expect health insurance to remain on the top of voters’ minds.

Twenty-two percent of respondents said they, or someone in their home, went without necessary medical attention because they were concerned with the cost.

And the concern didn’t vary too greatly depending on how the person was insured. A sixth of respondents with Medicare or Medicaid said they eschewed care, compared with 29 percent of those who bought insurance in the private market, such as through a public exchange set up by the Affordable Care Act, and 22 percent of workers with employer-sponsored insurance.

Three in 10 of those without insurance avoided going to the doctor when they needed to, although just 8 percent of total respondents said they did not have insurance.

These results fall in line with other surveys that illuminate the precarious financial situation in which many adults find themselves. Four in 10 Americans, for instance, would pay for an unexpected $1,000 emergency expense in cash, compared with 36 percent who would venture into debt through one means or another.

Consumers shouldering more of the load

This uncertainty is compounded by an ongoing trend of employer-sponsored insurance passing more costs onto patients. Four in 5 workers have a plan with a deductible, the amount you pay before your insurer picks up the tab, with the average for a single person $1,505, according to the Kaiser Family Foundation. More than half of workers had a deductible greater than $1,000 last year, compared with a third in 2012.

Part of this rise can be traced to the rapid adoption of high-deductible plans with a health savings account attached. Nearly a fifth of workers are covered by this type of plan, according to Kaiser, with an average deductible of $2,433 for single coverage.

One feature of pretty much every one of the myriad Republican plans debated last year increased the availability of high-deductible plans. 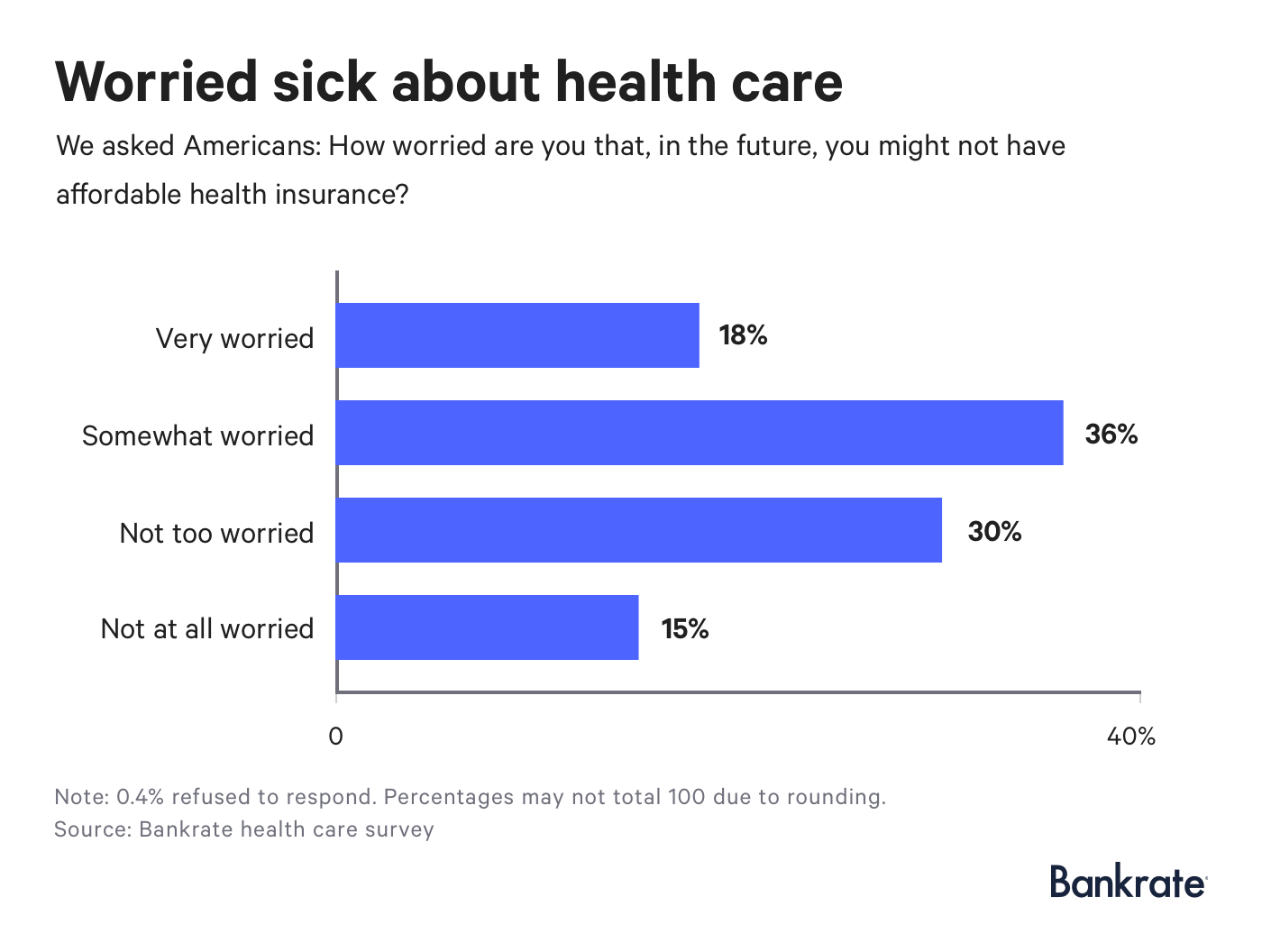 According to Bankrate’s survey, 54 percent claim to be either very or somewhat worried they might not have affordable health insurance in the future, while just a sixth of respondents are not worried at all.

One explanation may be that health insurance doesn’t stop a medical bill from giving you a fright; in fact, you may be more susceptible.

More than a third of Americans with insurance through the workplace, and 36 percent of private insurance holders, were surprised by the expense of a medical bill, compared with just a fifth of those without insurance at all.

What’s going on? An insured person, who pays a monthly premium, may have a sense that their insurer will pick up a greater share of the bill, while the uninsured knows he is on his own.

Bankrate’s survey also finds that women are more concerned than men over health insurance and the associated costs.

Women have been particularly vulnerable to GOP efforts to repeal and replace Obamacare with a piece of legislation that may not cover pre-existing conditions.

A 2016 Kaiser report found 30 percent of adult women under age 65 had a pre-existing condition that might give an insurer reason to decline coverage if we reverted to a pre-Affordable Care Act world. Among men, 24 percent were in the same situation. The report posited these were low estimates given limited data.

Ninety-one percent of respondents in a June Kaiser poll said it was very or somewhat important to bar insurers from denying coverage because of a person’s medical history, and 89 percent said insurers shouldn’t be allowed to charge people more because they were sick.

The Trump administration’s decision to stop defending the law against a legal challenge that claims these regulations are unconstitutional may only add to these voters’ concern. 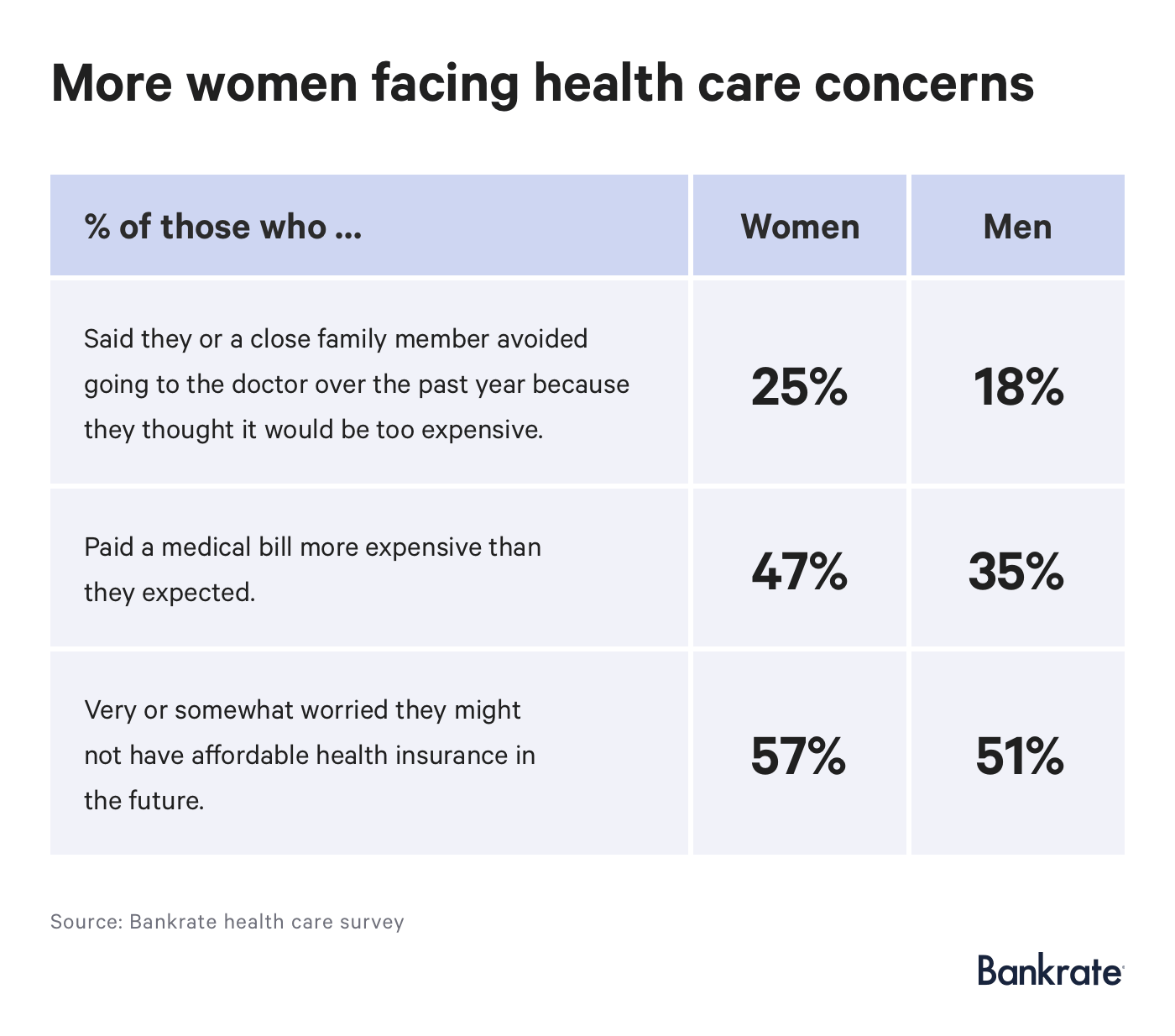 Build up an emergency fund in a high-yielding savings account. You’ll want enough to cover six months’ worth of emergency expenses, which is in the ballpark of $20,000 for an average family. Average income households aren’t anywhere close, holding a median amount of less than $4,000, per Federal Reserve data.

So, this will take some doing. Start slow, shoot for one week’s worth and then go from there. Automate a portion of your paycheck into a savings account you don’t touch. Toss in any extra cash that comes your way, from a bonus to a tax refund.

You can’t stop the rising deductibles and premiums, but you can be a more informed consumer.

Take advantage of free preventive services, which most plans must cover. These services range from diet counseling for adults at risk for a chronic disease to interventions to thwart your tobacco addiction.

Make sure all of your providers, from your primary care physician to specialists to your ER, are in your plan’s network. And when your doctor prescribes a medication, don’t be afraid to ask how much it costs, and if it’s too pricey, ask if for a cheaper generic alternative.

The fractured and confusing nature of America’s health care system requires patients to be on the offensive.

This study was conducted for Bankrate.com by GfK Custom Research North America on its OmniWeb online omnibus. The sample consists of 1,000 completed interviews, weighted to ensure accurate and reliable representation of the total population, 18 years and older. Fieldwork was undertaken July 20-22, 2018. The margin of error for total respondents is +/- 3%.