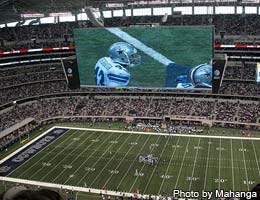 For fans of the pigskin, it might not be surprising that the richest team in the NFL is still the Dallas Cowboys. Thanks to a combined $200 million in sponsorships and premium seating prices, the Cowboys have held the top spot among NFL teams since 2007.

But it’s not the richest sports franchise. That honor belongs to the star of European soccer, Real Madrid. According to Forbes, it’s worth $3.3 billion, surpassing former No. 1 soccer club Manchester United.

Real Madrid just signed its largest sponsorship deal with the Dubai-based airline Emirates, worth $39 million a year for five years. Look for the airline’s name on team members’ shirts. The franchise also receives $42 million a year from Adidas.

The next two richest sports franchises are also soccer teams: Manchester United comes in at No. 2 with a value of $3.17 billion, followed by the No. 3 Barcelona, valued at $2.6 billion.

The highest-ranked U.S. sports franchise on the list of the richest is No. 4 New York Yankees, valued at $2.3 billion. The Dallas Cowboys rank fifth with a value of $2.1 billion.

But since this is football season, check out the most valuable football franchises to see if your team ranks among the top five.