Why give up U.S. citizenship? 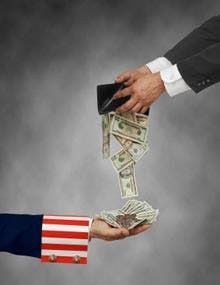 Approximately 1,780 expatriates renounced their U.S. citizenship in 2011, up from 235 in 2008. Why? Money, honey. Bloomberg reports that rich Americans are giving up their nationality in higher numbers since the crackdown by the Internal Revenue Service on tax evaders who try to hide their money offshore.

Unlike many other countries, the U.S. imposes taxes on its citizens no matter where they live, although overseas income up to $95,100 is exempt from income tax.

But in the four years since the IRS hammer fell on Swiss bank accounts in particular, non-U.S. banks have increased rules around disclosure for U.S. citizens. In Bern, the Swiss capital, renunciations have been higher because of this increased scrutiny, according to Bloomberg. In fact, a representative of the Swiss-American Chamber of Commerce says Americans are lining up to give up their U.S. citizenship. It only takes an average of 10 minutes: Expatriates are asked if they are acting voluntarily and understand the ramifications of renouncing citizenship. Once they pay a $450 fee, they only have to wait for a certificate in the mail making it official.

However, the IRS still may not go away so quickly. If assets exceed $2 million or the average tax bill over the past five years has been more than $151,000, a tax may be due on unrealized capital gains.

Taxes aren’t the only reason expatriates are renouncing citizenship. Some disagree with American politics. Others find it easier to establish foreign banking relationships and obtain mortgages. German lenders Deutsche Bank and HVB Group terminated the securities accounts of some U.S. citizens when stricter compliance laws were announced, and the third-largest Swiss banking group severed ties with U.S.-domiciled citizens and refuses any new account applications.

Would you ever consider renouncing U.S. citizenship for financial reasons?