What’s a Super Bowl ring worth? 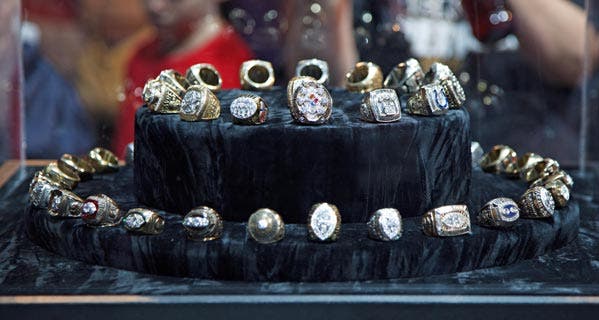 Of all the memorabilia associated with the Super Bowl, the ring worn by the victors is probably the most coveted — by the team, of course, but also by collectors. The ring’s worth is not just in the weight of the gold and the number of diamonds, but in what it represents and the fact that it’s part of a limited production.

The NFL gives teams an allowance of $5,000 per ring for up to 150 rings. Teams can spend more on the rings and usually do — they’ve been getting larger and more sparkly over the years. The team can also order more than 150, but the jeweler usually picks up the extra costs.

Jostens has made the majority of the rings, but there have been other jewelers. Last year’s Super Bowl ring for the Seattle Seahawks was crafted by Tiffany and Co. It’s encrusted with 183 diamonds in a white gold setting. While we don’t yet know the winner of this year’s matchup between the Seahawks and the New England Patriots, it’s likely the winning team will try to design a ring that “outsparkles” all the previous ones.

Although the jeweler rarely reveals the actual price of the rings, their value soars at auction. In 2012, according to The Huffington Post, New York Giants linebacker Lawrence Taylor’s ring from 1991’s Super Bowl XXV sold at auction for $230,401. Most rings have sold for far less. Factors determining the cost of a ring include whether a football player or team employee owned it, the popularity of the particular player and whether the game itself is one for the history books.

NBC News reported that the Super Bowl II ring earned in 1968 by former Green Bay Packers player Fred “Fuzzy” Thurston sold for $50,788 in 2011. Packers lineman Steve Wright’s ring from the first Super Bowl game in 1967 also sold in 2011 for more than $70,000, according to the Bleacher Report. At the time, it was believed to be the first ring from that game to ever come up for auction.