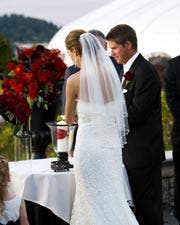 Whatever your feelings are about taking a trip down the aisle, being in a long-term marriage could leave you up to four times richer than your single or divorced peers.

NBC News reports that there are a variety of reasons for this. Married couples can take advantage of economies of scale, allowing them to build wealth faster. Couples can also divide and conquer when it comes to household and financial responsibilities, while sharing the expenses. For example: When one spouse helps with household duties, the other can concentrate on getting ahead in a career.

Jay Zagorsky, a research scientist at The Ohio State University, told NBC that his research shows people in long-term marriages each have about twice as much wealth as single people who never married. Together, a couple’s wealth is four times that of a single person’s. He added that the key is to stay married. In his research, those who get divorced see a dramatic decline in wealth, leaving them in worse financial straits than those who never married.

Interestingly, couples in a committed relationship, but not married, don’t fare as well as married couples, Zagorsky says. He believes it’s because they don’t fully commit to sharing their finances and expenses.

Finally, there’s also a demographic element behind the statistics: Bradford Wilcox, director of the National Marriage Project at the University of Virginia, says the people getting married are more affluent to begin with, and more educated. They are also less likely to get divorced, perhaps because they don’t have the financial pressures of less educated, financially strapped couples.