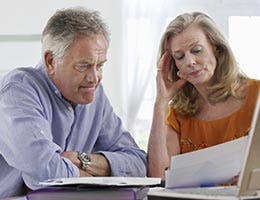 Most people have been taught that it’s not polite to talk about politics, religion or money. But while survey respondents say they find it easier to discuss the first two topics, money remains the most challenging subject — perhaps because they also indicate that it’s the biggest source of stress in their lives.

In a Wells Fargo study, 44 percent of respondents say talking about personal finances is more difficult than talking about death, politics, religion, taxes and personal health. Yet 39 percent report that money is their biggest cause of stress, and 33 percent say they lose sleep worrying about it.

But perhaps it would be good to apply the same devotion to fiscal fitness as Americans do to physical fitness. In the survey, fewer than half of respondents, 44 percent, think they are in good financial health, while 59 percent say they are in good physical shape.

One key reason for the disparity may be lack of knowledge. Unlike with health and exercise, where 40 percent say motivation is the biggest barrier, when it comes to money, the majority of respondents say they simply don’t know how to get started.

“When someone is physically out of shape, they typically understand that eating well and exercising more will help get them back on track,” Karen Wimbish, director of Retail Retirement at Wells Fargo, said in a release. “With money, however, there’s a lack of understanding about the importance of designing a plan. Only a third of adults have some type of financial plan or a simple household budget in place, which means most Americans don’t have the roadmap needed to improve their financial health.”

Not many people want to spend time focusing on something that causes stress. Yet devising a financial plan for both the short term and long term, and talking about it with your family or a professional, may be the best remedy.

These calculators on developing a budget and a retirement plan can help you assess whether you’re on the right track to achieving fiscal fitness.