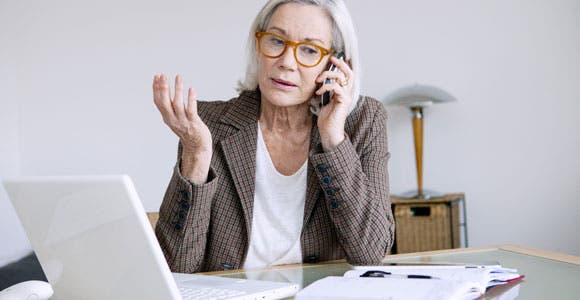 The Internal Revenue Service has shifted most of its operations online, but tax scammers are relying on a 19th century invention.

Con artists pretending to be IRS agents are calling people via Alexander Graham Bell’s communications-changing device and, in many cases, demanding money they claim is due the federal Treasury.

The fake IRS representatives tell the folks who answer the phone that if they don’t pay up immediately, they could have their driver’s license revoked or even face jail time. Unfortunately, many folks are scared into complying with the false tax ultimatum.

If this sounds familiar, then you’re likely a regular reader of the Bankrate Taxes Blog. Back in March I wrote about these fraudulent tax telephone calls, which at that time the IRS was calling the largest tax scam ever.

That dubious distinction is growing.

Through mid-August, the Treasury Inspector General for Tax Administration, or TIGTA, has received around 90,000 complaints about the scam-IRS calls via its own telephone hotline. More than 1,000 of those who were contacted believed the con artists and handed over an estimated $5 million, according to the IRS.

In the Central Texas area that I now call home, at least one elderly woman was bilked of $2,500, according to local news reports. A 67-year-old Austin resident also said that he had received at least 10 calls from tax scammers over the last six months. The man said he was threatened with arrest if he didn’t pay the callers the back tax amount they said he owed. He called the police instead.

That’s exactly what the IRS says you should do.

In addition, if you know you don’t have an outstanding federal tax bill, let Uncle Sam know that a con artist contacted you by calling TIGTA’s toll-free scam hotline at (800) 366-4484. Also let the Federal Trade Commission know by using the agency’s “FTC Complaint Assistant” at its FTC.gov website.

“There are clear warning signs about these scams, which continue at high levels throughout the nation,” said IRS Commissioner John Koskinen in a recent warning about the continuing scam. “Taxpayers should remember their first contact with the IRS will not be a call from out of the blue, but through official correspondence sent through the mail. A big red flag for these scams are angry, threatening calls from people who say they are from the IRS and urging immediate payment. This is not how we operate. People should hang up immediately and contact TIGTA or the IRS.”

If, however, you think you might have an unpaid tax issue, go directly to the source. Call the IRS toll-free at (800) 829-1040. A real IRS agent at that number can help you determine any tax liability and discuss the tax agency’s legitimate payment options.

When the IRS first put out the alert about this scam, it noted that older individuals and recent immigrants were among the scammers’ prime targets. As the tax scam incidents close to my home indicate, that’s still happening.

And as the daughter of an older mom, I also urge any older person who gets a scam telephone call, tax or otherwise, to let your family know.

My 80-year-old mom is way too nice to everyone, in person and on the phone, but I’ve finally convinced her not to talk to anyone about anything that involves her money. She now tells such callers that she has to discuss it with me first.

Adult children with a family situation like mine: Don’t wait until your older mom or dad becomes a target. Talk to your parents or other elderly relatives about this scam before they get a call so that they don’t become another victim.