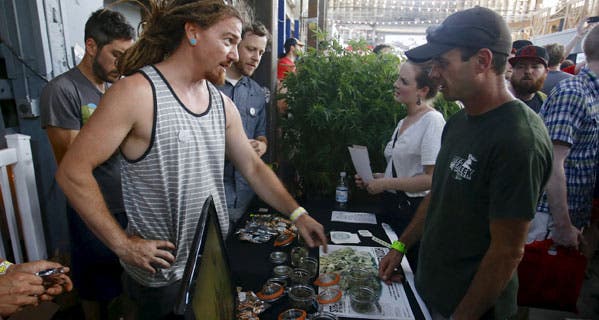 Oct. 1 is a big day in Oregon. Recreational marijuana sales began today in the Beaver State.

That’s great news for folks age 21 or older who want to buy up to 1/4 of an ounce of dried marijuana flower and leaf, or as many as 4 immature marijuana plants or an unlimited number of marijuana seeds.

Even better news for the herb aficionados is that Oregon pot sales are not taxed. Yet.

That will happen next year. Starting Jan. 5, 2016, recreational weed sales will be subject to a tax of 25%.

Oregon is just the 3rd state where the sale of pot for non-medicinal purposes is legal.

Those other 2 states have been bringing in sizable amounts of taxes on their pot sales. Oregon officials, however, decided to postpone the tax while they work out the process of making marijuana available and getting the new regulations in place.

Colorado’s legal pot selling system also featured a similar staggered-start approach, and things have worked out nicely there. The Rocky Mountain state is raising more revenue from marijuana taxes than from alcohol.

Colorado Department of Revenue data show that the state has received nearly $70 million in tax revenue from marijuana from July 1, 2014 through June 30, 2015. During that same period, alcohol taxes brought in around $42 million.

Oregon lawmakers set the base marijuana sales tax rate at 17%, but also gave cities and counties the option to add an additional 3% tax.

So where’s the extra 5% come from in the tax rate that will take effect next January?

Until retail stores are established and licensed to sell recreational pot, the herb will be sold through medical dispensaries. That’s what’s happening today.

The Oregon Liquor Control Commission will administer recreational marijuana sales and estimates that for the 2015-2017 biennium, pot sales taxes will bring in $10.7 million.

While pot devotees welcome the new legal status of their preferred choice of altered consciousness, a lot of non-toking Oregonians also will benefit.

The law that legalized recreational marijuana provides that most of the revenue from sales, 40%, go to Oregon’s Common School Fund. Another 20% is designated for the state’s Mental Health Alcoholism and Drug Services programs.

State police and Oregon alcohol and drug abuse prevention programs also will get some of the money, as will cities and counties to help them enforce the new marijuana law.

More states are looking to legalize marijuana for personal use. Do you support such a shift in your state? Would the amount of tax money that pot sales might bring in and the programs it would fund make a difference in your decision?