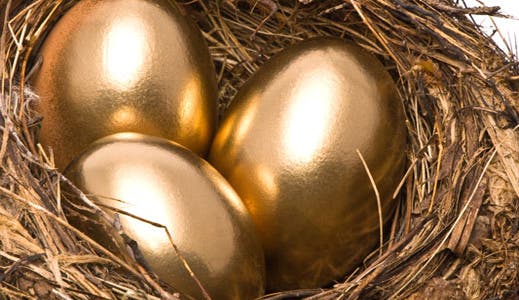 How’s your retirement savings account doing? Probably not as good as the IRAs held by 314 individuals.

That handful of taxpayers in 2011 had IRAs worth more than $25 million, according to a new Government Accountability Office, or GAO, analysis of retirement accounts.

That’s right; more than $25 million in each separate account. The total market value of the retirement savings for these uber-savers came to $81 billion.

The favored few with millions in individual retirement accounts were mentioned during a Sept. 16 Senate Finance Committee hearing on how current tax laws help or hurt retirement savings.

The committee’s chairman, Sen. Ron Wyden, D-Ore., also was particularly interested in how the tax code could be tweaked to increase the retirement savings of those of more modest means.

“The American taxpayer delivers $140 billion each year subsidizing retirement accounts, but millions of Americans are nearing retirement with little or nothing saved,” said Wyden as he opened the hearing.

Meanwhile, as the government watchdog study and other data show, a few Americans are socking away millions every year in tax-favored retirement accounts.

Such a dichotomy makes it “clear that something is out of whack,” said Wyden. “Wise investors have every right to use all the tools available to them, and no one should begrudge them their success. But IRAs were never intended to become tax shelters for millionaires. They’re designed to help typical Americans save for retirement.”

Wyden and ranking minority member Sen. Orrin Hatch, R-Utah, called the hearing to get ideas on ways the tax code might be used to pump up the retirement savings of less well-off Americans.

The panel of investment advisers, economists and academicians generally agreed that current tax breaks should be left alone. That includes the benefits enjoyed by higher income savers. Congressional temptation to limit retirement savings tax breaks for wealthier individuals could backfire.

“Cutting benefits at one level, such as higher earners, could undermine the whole plan,” warned Dr. Brian Reid, chief economist at the Investment Company Institute in Washington, D.C.

The lawmakers’ focus, agreed the panel, should be on ways to get more middle-income earners saving via workplace retirement plans. These workers, said Betts, are 15 times more likely to save for retirement at work than on their own in IRAs.

Wyden asked each witness for one change to retirement tax laws that provide a bigger bang for the taxpayers’ bucks.

Recommendations included simplifying rules so that it is easier for smaller businesses to set up retirement plans, keeping company stock out of the plans’ investment mix, strengthening auto-enrollment and offering upfront incentives to encourage employee participation.

“Individuals are more responsive to immediate than to delayed financial incentives,” said Brigitte Madrian, a Harvard University professor who has studied the benefits of automatic 401(k) enrollment.

Tax-deferral and compound earnings are nice retirement plan enticements, she said, but “what could perhaps be a very effective financial incentive to encourage individuals to enroll in a workplace savings plan, a small but immediate financial reward, is actually not allowed in 401(k) or 403(b) plans under current law.”

“The tax code overall is very complicated,” she said. “Very few understand the tax implications they’re facing and that there are so many different tax-favored ways to save makes it more difficult. We need simplification and consistency across all options, for both employers and employees.”

Are you saving for retirement? Do you put money in your office savings plan or an IRA or both? Do you consider the tax implications when you contribute to your retirement accounts?