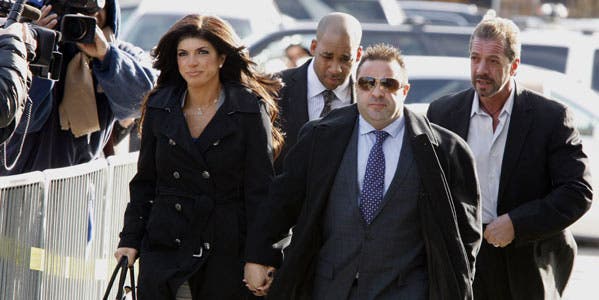 The love that Teresa and Joe Giudice share has not diminished as the Real Housewives of New Jersey reality TV couple faces possible prison time on a variety of tax and fraud charges.

“There is no truth to the rumors that my clients Joe and Teresa Giudice are having any marital issues,” the couple’s crisis manager Wendy Feldman told E! News this week as the pair’s sentencing hearings approach.

“In fact, their legal issues have brought them closer together,” Feldman said. “They remain devoted to each other and their four beautiful daughters.”

Good for them. But that’s often not the case.

Money is always a pressure point in a marriage. When the money also is part of legal problems, then a relationship can really suffer.

In the Giudices’ case, there’s a lot of pressure.

They were named in a 41-count federal indictment that charges them with, among other things, lending fraud involving fake W-2 forms, false income amounts and hidden assets. Joe also was charged with failure to file federal tax returns. The pair also faces a variety of New Jersey state charges.

The federal tax charges cover tax years 2004 through 2008, during which time Joe allegedly earned nearly $1 million. That was before the 2009 Bravo television channel debut of the Real Housewives of New Jersey, referenced as RHONJ on social media.

The couple originally pleaded not guilty in connection with the federal indictment, but in March changed their minds and copped to charges in Newark Federal Court. Their sentencings were scheduled for Sept. 23, but were pushed to Oct. 2.

Joe faces a possible 37 to 46 months in jail; since he’s an Italian citizen, he also could face deportation. Teresa could get up to 27 months.

At least separate your tax filings

If Teresa and/or Joe end up behind bars (or in another country), I hope they can stay committed to each other. I’m a long-time wife and a romantic at heart. Hey, tax geeks have feelings, too!

And as a tax geek softy, I’m glad that the tax code offers some help for spouses who want to separate themselves from their husband’s or wife’s tax filing — if not actually separate.

When you’re married and file a joint tax return, you are legally liable for what’s on that 1040. That includes any taxes due, even if only one of you earned the money.

If you have concerns about a spouse’s entries on your shared return or think your husband or wife is being a bit too aggressive with some tax claims, you might want to file your own 1040. Married filing separately generally isn’t as advantageous as filing a joint return, but it could prevent future troubles if your suspicions about your spouse’s tax claims are well founded.

If, however, you don’t catch the possible tax trouble before you file a joint return, you might be able to get relief retroactively.

This allows you to explain your unwitting role in a questionable tax filing and possibly be cleared of owing any additional tax the IRS might find is jointly due.

You also might be able to get your part of a refund that was offset because of your spouse’s questionable tax techniques.

Taxes are a lot like a marriage. Communication is key to ensure success in both.

So talk taxes with your spouse before filing. But if worse comes to worst in your relationship and your 1040, check out innocent and injured spouse remedies.