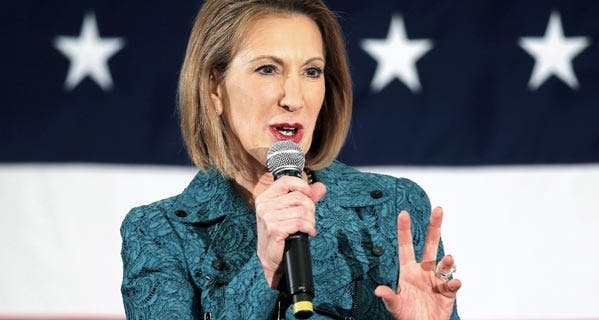 Privacy is paramount when it comes to taxes, except if you’re a presidential candidate.

All U.S. taxpayers freaked out when the Internal Revenue Service revealed that its online transcript program had been hacked, exposing the tax and other financial information of more than 100,000 filers.

But when it comes to folks seeking the White House, such protections are, shall we say, a little squishy. We, and by “we” I mean “voters,” have come to expect presidential candidates to satisfy our tax-peeping-Tom tendencies. If one resists, as 2012 Republican nominee Mitt Romney did for a while, it makes makes us, and by “us” I again mean “voters,” look askance at that candidate’s electability.

Fiorina opens up her finances

Carly Fiorina, a long-shot to nab the GOP 2016 presidential nomination, learned that lesson well and has become the first White House wannabe to open up her finances to the public.

Her personal financial disclosure statement, which candidates are required by law to file, shows that Fiorina and her husband are worth $59 million. But the former head of Hewlett-Packard went a step further, also releasing her 2012 and 2013 federal tax returns.

Is it our business?

So why do we care? That’s easy. We all have a bit of Gladys Kravitz in us. You remember Gladys, the nosy neighbor who watched the strange happenings at Darrin and Samantha Stephens’ house in Bewitched.

The bigger question is, should we?

Sure, a part of the interest is purely financial prurience. Presidential candidates tend to be rich and we love to know as much as we can about all their money. Personally, I don’t want anyone to know how much or little I make, specifics on how I manage my money or exactly how much tax I pay. That’s one of the reasons I’ll never run for public office.

But such information can be useful when it comes to the person who will run our country. How a person manages his or her personal finances can be a good measure of what kind of job he or she will do with our tax money. And their tax returns show us just how they personally deal, or don’t, with our tax laws.

Fiorina’s finances and her willingness to open up at least a bit about them already have earned her some positive press in a crowded field. She’s also put pressure on another woman running for the White House, Hillary Clinton, who’s still catching some flack about money she and former President Bill Clinton raised through their foundation.

And another GOP contender, Marco Rubio, is learning some hard financial transparency lessons.

The financial troubles of Florida’s junior senator, from apparent real estate overspending to minuscule savings habits to misusing a Republican Party credit card, have been front page news. People (voters) are asking, can he handle Uncle Sam’s money with this kind of record?

I don’t know about you, but I am really curious about Rubio’s 1040s right now.

If you’re not a candidate for public office and your tax data gets out without your approval, Bankrate details the steps that tax identity theft fraud victims should take. Bankrate also offers a way for you to check your credit reports for malfeasance for free at myBankrate.