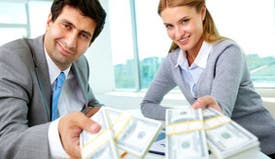 Those wacky rich folks are at it again.

Some wealthy Americans say they support a tax increase on themselves to help reduce income inequality.

That’s one of the results from CNBC’s recent Millionaire Survey. Of the 514 millionaires polled in March by Spectrem Group, 51 percent believe income inequality is a “major problem” for the United States. Of that that group, nearly two-thirds said the wealth gap could be narrowed with a higher minimum wage and higher taxes on the wealthy.

A cynic might say that the rich support paying higher taxes because right now the chances of that happening are slim. It’s an election year and no politician wants to demand that potential voters pony up more in taxes before they head to the polls.

Before some of you get all worked up about a possibly skewed poll, CNBC points out that the surveyed group was split between Democrats, Republicans and Independents.

And the millionaires also hold some expected opinions.

CNBC reports that the millionaires surveyed earlier this year are proud of their high incomes and attribute their financial success to their own hard work, smart investing and good savings habits.

They also believe that anyone in America can join their ranks if they work hard.

But the millionaires also told the pollsters that cultural and family issues keep many Americans from climbing the wealth ladder.

To overcome such obstacles, in addition to higher taxes on themselves, the rich support better education and better savings incentives for the poor and middle class.

It’s not the first time that rich folks have wanted to pitch for the country’s overall economic good via taxes.

Back in 2009, the rich members of Wealth for the Common Good lobbied for hiking the top income tax rate from 35 percent to 39.6 percent for individuals making more than $235,000.

The added tax money, according to the nonprofit group, would help create an economy that works for everyone.

The wealthy members of that group got their wish. In January 2013, the American Taxpayer Relief Act, popularly known as the “fiscal cliff” bill, bumped up the top income tax rate to 39.6 percent.

The rich’s added tax contributions seem to have helped with the United States’ budget deficit.

Seven months into the 2014 budget year that started Oct. 1, 2013, the federal deficit stood at $306.4 billion. That puts the deficit 37 percent lower than at the same period last year.

A major contributor to the deficit reduction was Uncle Sam’s April revenue surplus, thanks primarily to annual tax payments.

Still, the gap between rich and poor continues to grow. So taxes obviously aren’t the only answer. The bottom line is that more people at more income levels need to be making more money.

Congressional approval of transportation legislation that would save 700,000 jobs, along with, as the millionaires mentioned, a hike in the minimum wage, would be good steps to help shore up the lower end of the economic earnings scale.

Lawmakers tend to pay more attention to folks with more money. So maybe they’ll listen to the millionaires when it comes to income inequality.

Whether they’ll do so before or after ballots are cast on Nov. 4 remains to be seen.