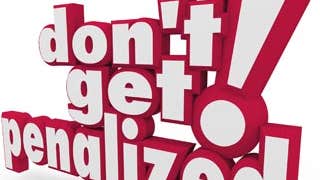 America believes in second chances. In fact, we love great redemption stories, except when the Internal Revenue Service is involved.

IRS employees are just like you and me. They make mistakes. Sometimes they make tax mistakes, like not paying what they owe to Uncle Sam.

When such nonpayments are willful, the IRS Restructuring and Reform Act of 1998 says the tax delinquent employees should be fired.

Of course, since we’re talking taxes, there are exceptions. The 1998 act also gives the IRS commissioner the sole authority to mitigate penalties.

A recent investigation by the Treasury inspector general for tax administration investigation looked at a cases where IRS employees didn’t pay their taxes.

From fiscal years 2004 through 2013, TIGTA found 1,580 IRS employees did not pay their taxes; 39 percent of those workers were fired. The remaining 61 percent kept their jobs and instead received lesser penalties, such as suspensions, reprimands or counseling.

In a separate, smaller sample of willful tax violations, TIGTA also found that different employees in the same tax situations received different discipline. And in many cases where IRS workers weren’t fired, the commissioner’s decision to apply lesser penalties was not clearly noted in the case files.

‘IRS must do better’

Rep. Peter Roskam, R-Illinois, finds this lack of consistency is troubling. And as the chairman of the House Ways and Means Oversight Subcommittee, Roskam says the IRS “can and must do better.”

“The IRS owes the American people an explanation for this display of bureaucratic incompetence,” says Roskam in a statement issued after the TIGTA report was released May 6. “To argue that budget cuts provide ‘a tax cut for tax cheats’ while harboring employees who violate the laws they are supposed to enforce quite frankly defies logic.”

I agree with Roskam that the optics here are horrible. As collector of our taxes and enforcer of our tax laws, the IRS must be above reproach. IRS workers who don’t pay their taxes need to be disciplined.

And I agree with TIGTA that in cases where workers are not fired, the reasons for such leniency should be clearly documented.

The IRS says it is taking TIGTA’s recommendation to heart. “Our changes will include a more proactive approach to ensure timeliness and consistency, where appropriate, and provide more transparency in the mitigation process,” says IRS Human Capital Officer Daniel Riordan.

But I also hate to see IRS employees used at weapons in the political fight over taxes. The fact is, IRS workers are more tax compliant than any other federal employees.

The IRS’ latest report (issued Sept. 30, 2014) on tax delinquencies among federal workers shows that the Treasury Department, of which the IRS is a part, has the lowest rate of tax noncompliance — only 1.19 percent. Only 1,253 employees out of more than 10 million Treasury workers didn’t pay their taxes.

Yes, they need to pay. But don’t get unduly worked up over a relative handful of workers who haven’t paid their tax bills.

As for your taxes, if you’re having trouble coming up with the cash you owe, the IRS offers taxpayers several payment options.