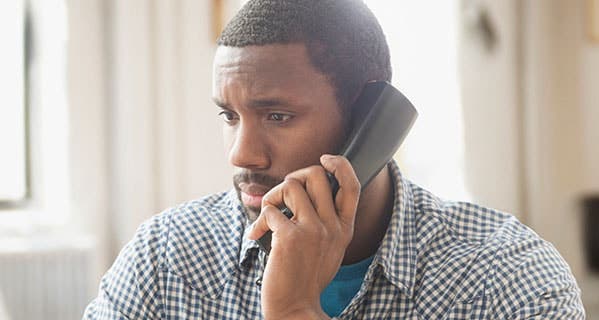 The Internal Revenue Service has learned a hard lesson about never saying never.

After years of assuring us that IRS employees never initiate calls to taxpayers, a tax preparer told the National Taxpayer Advocate that one of his clients had indeed received a call from the IRS — the real, live, legitimate IRS — without any prior notice.

That “no call without a letter first” procedure is regularly cited by the IRS, including by Commissioner John Koskinen himself, when alerts are issued in connection with the persistent IRS impersonation telephone tax scam.

As the scam, which the IRS and the Treasury Inspector General for Tax Administration say is the largest ever, expanded, taxpayers were advised to ignore purported phone calls from the IRS in order to protect themselves against tax identity theft and refund fraud.

Now, that warning has been turned upside down — at least a bit.

That actual IRS agents do sometimes call taxpayers unannounced has the tax world buzzing. It also has taxpayers worried about how they now can differentiate between real IRS callers and criminal con artists.

The revelation came at a May 5 public forum in Iowa, one of several that National Taxpayer Advocate Nina Olson is holding across the country.

According to the tax publication Tax Analysts, which first reported the real IRS auditor calls, an Iowa enrolled agent said an IRS employee in the state called one of his clients, an elderly man, without first sending the taxpayer a contact letter.

While Olson expressed surprise at the unannounced IRS phone call, others at the forum said the practice was common, at least in the Hawkeye State.

After the Iowa event, Olson told Tax Analysts that an Omaha, Nebraska-based Taxpayer Advocate Service staffer told her that as far back as a year ago, the Internal Revenue Manual advised revenue agents that the preferred method for initiating taxpayer contact was by phone.

Olson gave the IRS’ occasional first-contact calls the benefit of the doubt, speculating that the IRS manual’s call instruction may be old and not revised to account for the current rash of telephone tax scams.

The IRS itself, however, has had second thoughts about its call-first audit outreach.

In statement issued after the Iowa forum, the IRS detailed the differences between a real auditor’s call and one from tax ID thieves. “Generally, phone scam callers are focused on masquerading as an IRS collection operation and demanding immediate payment of money,” said the IRS statement. “These callers typically are not saying they are contacting taxpayers for an audit.”

The IRS also noted that when a legitimate tax agent conducts an audit, an appointment generally must be scheduled to discuss the case. IRS revenue agents do, in some limited in-person field audits, call first to schedule the initial audit meeting. But during those scheduling calls, a real IRS agent will not ask for payment or personal financial information.

Those call-first instances, however, are over.

“In an abundance of caution and in light of pervasive phone scams seeking to extort money from taxpayers, the IRS has decided to adjust this policy for in-person field exams,” said the IRS in its statement. It now will notify taxpayers in this smaller exam category first by mail that their return has been selected for audit and then contact them to schedule audit appointments.

You, too, can help by remaining skeptical of all purported tax calls. If you are concerned about a call ostensibly from the IRS, hang up and contact the agency directly yourself or have your tax preparer do so.

Don’t worry. The IRS won’t be mad that you broke off the call. In fact, the agency suggests the very same thing.

You also should keep an eye on your personal data and credit reports if you have or suspect you’ve fallen prey to tax identity thieves. You can check those for free at mybankrate.com.