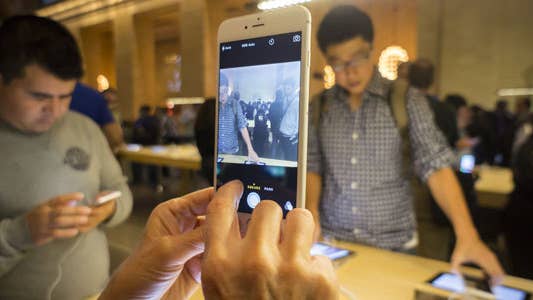 More of us are cutting the phone cord. A government study found that two in every five American homes had only wireless telephones during the second half of 2013, an increase of 1.6 percentage points over that year’s first six months.

Many of those cell-phone owners probably lined up to be the first with an iPhone 6 or 6 Plus.

In getting those new phones, the cellular devotees also got new contracts. And depending on where they live, they’re also getting a whole lot of taxes.

U.S. wireless consumers pay an average of 17.05 percent in combined federal, state, and local taxes and fees on their cell phone bills, according to a new report released by the Tax Foundation, a Washington, D.C.-based tax policy nonprofit.

“Accessing content on our phones these days is easier than ever before, but paying cell phone bills remains difficult for many,” says Joseph Henchman, vice president of legal and state projects for the Tax Foundation.

Where you live has a big effect on your cell phone taxes.

At the municipal level four cities have tax rates that exceed 25 percent of customers’ bills. The costliest cities for calling are Chicago, Baltimore, Omaha and New York City.

The Tax Foundation study found that Chicago this year increased its monthly 911 fee from $2.50 to $3.90. This fee, along with such charges as the Windy City’s $4 per line fee for general revenue purposes, means that Chicago consumers on certain plans face taxes and fees that are 35.42 percent of their total cell phone bill.

The Tax Foundation study finds that the average rates of taxes and fees on wireless telephone services are more than two times higher than the average sales tax rates that apply to most other taxable goods and services.

A key reason why the rates are so high? They’re easy to hide in plain sight.

Admit it, you don’t look closely at your cell phone bill. Even if you do, it’s long, convoluted and difficult to decipher. If the bill bumps up just a few cents each month, you’re probably not going to spend the time to figure out why.

“Wireless taxes and fees are regressive and have a disproportionate impact on poorer citizens,” says Scott Mackey of KSE Partners, a government affairs and communications strategy firm in Montpelier, Vermont, and co-author of the report. “Excessive taxes and fees may reduce low-income consumers’ access to wireless service.”

“Instead of singling out wireless services with stealth tax increases, state and local governments should seek more neutral and less disruptive sources of revenue,” says Henchman.

Do you know exactly how much in taxes you pay for your cell phone service? Have you noticed the taxes increasing?