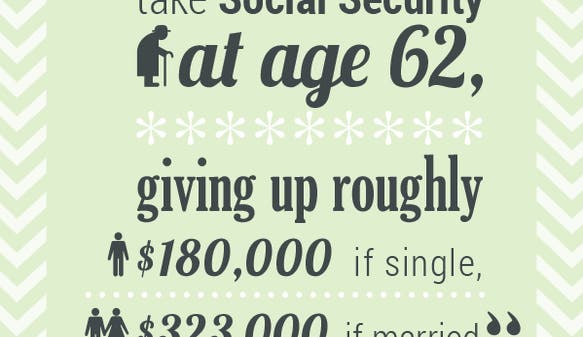 Editor’s note: Jean Chatzky, the financial editor for NBC’s “TODAY” show, is an award-winning personal finance journalist, AARP’s personal finance ambassador and a contributing editor for Fortune magazine. Her eighth and most recent book is “Money Rules: The Simple Path to Lifelong Security.” Jean blogs at www.jeanchatzky.com and tweets @JeanChatzky. You can find her on LinkedIn and Facebook, too.

We’re all concerned that the money we’ve saved for retirement won’t be enough to float us through. So how would you feel if you knew that you could be leaving hundreds of thousands of dollars on the table?

Why? Because waiting, typically, until age 70 to cash in increases your benefit amount significantly.

“For every year past full retirement age you delay taking benefits, you’re getting a guaranteed 8 percent increase. There’s nowhere else you’re going to get 8 percent guaranteed and backed by the U.S. government,” says Meyer.

That makes the decision to tap benefits a complicated one. Here are a few things to consider.

Yes, it’s impossible to peg, but it’s important to consider. As Laurence Kotlikoff, a professor of economics at Boston University, says, “You don’t think your house is going to burn down, but it wouldn’t be reasonable to skip homeowners insurance.”

Don’t rush to take Social Security just because you might die and leave your money on the table. Still, you probably have a general idea of how long you expect to live, based on your health and family history. While we know that, on average, 65-year-old men live to be 82 and 65-year-old women live to be to 85, each individual is different. If your parents are still healthy as a horse, you should shoot long term. If no one in your family has made it past age 70 and you’re a smoker, it might be safe to assume a shorter time horizon for yourself. There are longevity calculators that can give you a general idea; a good financial planner will get you even closer.

“If you’re solving for how to get the most money out of the system and you’re single, all cumulative benefits equal each other at age 80,” says Meyer. That means if you and I have the same benefits and you begin drawing at 62 and I start at 70, we’ll have pulled the exact same amount out around age 80. But because I waited and allowed my benefit to increase by that 8 percent a year, I’ll continue drawing a higher amount while you’ll be stuck with that lower benefit for tapping early.

“If you waited, for every year after the age of 80 that you live, you start to accumulate more — significantly more,” says Meyer. “We can find hundreds of thousands of dollars.”

If you’re married and one spouse earns significantly more — and, again, you have reason to believe that at least one of you will live past age 80 — the higher earner should wait to take benefits while the lower earner taps early, if necessary. With this strategy, if the higher earner passes away first, the surviving spouse can take 100 percent of his benefits instead of her own.

If the above flew right over your head — and I admit, it’s complicated — or you feel you fall into a different category completely, I believe it’s worth getting some help to figure out a strategy that works for you. I plan to do just that.