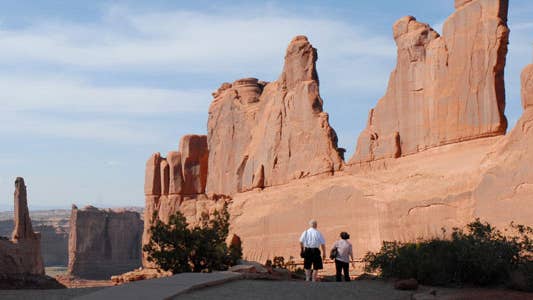 A flexible schedule is one of the best things about retirement. You can pack up and travel, without begging the boss for time off.

Travel rewards expert and MommyPoints.com blogger Summer Hull has been helping her 60ish, recently retired parents take advantage of their newfound freedom and see the world on a surprisingly small travel budget.

Since Hull has been working with them, her parents have made multiple trips all over the U.S. from their home base in Texas. While almost every airline offers some some sort of airline mile rewards plan, they have had particular success using Spirit Airlines, Hull says. “Some people don’t love Spirit, but for my parents, it has worked out great,” Hull says.

They often start their trips by flying to Las Vegas, which Hull says is particularly rewards-friendly, with lots of rental car and hotel deals. But, they also have had success finding cheap flight going east. Their next big trip was a visit to Boston on a $100 round-trip fare.

Here’s some of Hull’s advice to her folks and other travelers who have flexible schedules.

Get over your fear of using credit. Hull says that to accumulate enough mileage points to take cheap trips, you need to put everyday expenses on credit cards, and her parents were very reluctant to do that. “They were terrified about racking up debt. I had to convince them to look at credit differently — to use the cards to pay for ordinary spending and medical costs then pay off off all the bills at the end of the month.”

Make decisions quickly. These deals are fleeting, Hull says. “There’s no time to mull it over. If there is a deal to some place you want to go, buy now and figure out the details later.”

Be willing to travel in the off-season. Some of the best deals are available when the kids are in school and adults are likely to be hard at work — in the fall, January and February and during the summer.

Learn to be social media savvy. Some of the best deals turn up on Twitter. Hull says she monitors @airfarewatchdog and @flightdeal. And, of course, she tells her parents to follow  MommyPoints.com.

Learn to read airline rewards charts. Different airlines offer different deals on the same routes. Obviously, it is better to pay 12,500 rewards points for a one-way trip than it is to pay two times that amount, so study up, Hull says.

Check out the credit cards that give the best air mile rewards.