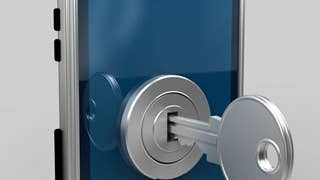 Most phones you buy through a major wireless carrier come locked by default, meaning they can only be used on that carrier’s network. Thanks to the Unlocking Consumer Choice and Wireless Competition Act, signed into law by President Barack Obama, you can now legally break that lock.

“What the cellphone unlocking bill does is basically make it clearly lawful once again for consumers to unlock their phones so they can switch providers,” says Corynne McSherry, intellectual property director for the Electronic Frontier Foundation. “The reason that they needed this law is where things go crazy.”

The issue can be traced back to a provision in the 1998 Digital Millennium Copyright Act, which makes it a crime to circumvent technological controls put on electronics and media, typically referred to as “digital rights management,” or DRM. It was originally aimed at people who wanted to make illegal copies of copy-protected CDs and DVDs, but ended up being applied to all kinds of electronic devices, including phones, says McSherry.

Technically, unlocking your phone could be considered breaking the digital rights management on your device that keeps it associated with the provider you bought it from, McSherry says.

Fortunately, there’s a workaround built into the law.

“Congress realized that sometimes you want to break DRM for reasons that are perfectly legal, like switching cell phone providers,” McSherry says. “So, Congress included a process where you could get an exemption from the law if you were trying to do the unlocking for a lawful purpose.”

That fix worked until a 2013 ruling by the Librarian of Congress, Reagan appointee James Hadley Billington, made it potentially illegal for consumers to unlock their phones themselves, or have a 3rd party do it for them.

You may be surprised that the Librarian of Congress has the authority to regulate how you use your cellphone. Some legislators who worked on the original bill would probably be surprised, too, says McSherry.

“This is a huge example of unintended consequences,” says McSherry. “Congress did not intend for the DMCA to get in the way of peoples’ ability to switch cellphone providers. The whole point of this part of the DMCA was supposed to be about protecting copyrighted work and fighting back against infringing activities.”

Understandably, that ruling annoyed a lot of people who thought they should decide how to use the mobile devices they owned. Concerned citizens quickly put together a petition on whitehouse.gov that garnered 114,322 signatures and a favorable reply from the White House.

Last month, the Senate passed the Unlocking Consumer Choice and Wireless Competition Act unanimously, paving the way for the passage in the House of a nearly identical bill, which President Obama signed into law today.

In addition to putting the exemption for phones back in place, it also instructs the Librarian to consider doing the same for other wireless devices, such as tablets.

It also puts in place a “grandma exemption,” McSherry says, which allows 3rd parties to unlock phones on behalf of others who aren’t technologically savvy enough to do it themselves, a group that may or may not include your grandma.

What do you think? Should consumers be entitled to unlock their phones? Should the Librarian of Congress be running the show here?