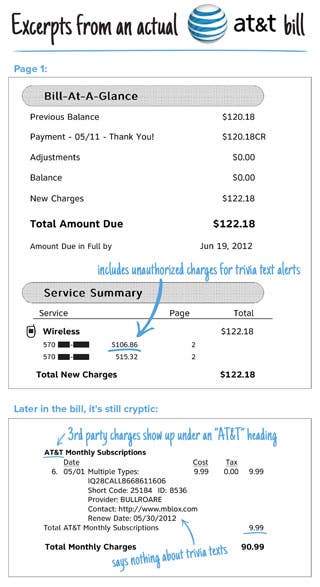 You didn’t want or need those flirting tips that kept popping up on your cell phone.

But you paid for them unwittingly anyway.

Now you may be due a cut of a record $105 million penalty AT&T has agreed to pay to settle claims it billed customers for services provided by third-party vendors that those customers never asked for.

The Federal Trade Commission alleged AT&T billed hundreds of millions of dollars in unauthorized charges — typically in amounts of $9.99 a month —  for ringtones, celebrity gossip, horoscopes and other subscriptions provided by outside companies. AT&T then kept at least 35 percent of the charges it imposed, according to the FTC complaint.

The practice known as mobile cramming is pervasive, a U.S. Senate committee found earlier this year. And the federal government is getting wise to it after consumers began expressing outrage. (AT&T customer service, for example, logged some 1.3 million complaints over a single year.)

In addition to AT&T, the FTC sued wireless provider T-Mobile in July, alleging it too participated in cramming, billing customers millions of dollars for unwanted services and then burying the charges in opaque terms on their monthly statement.

The federal government said AT&T also concealed its charges, making it near impossible for customers to decode what they were being charged for. The fees often were listed as “AT&T Monthly Subscriptions.”

As part of the settlement, AT&T agreed to pay $80 million to the FTC, some of which will go toward customer refunds. The company also will pay $25 million in penalties divided between state and federal government agencies.

Going forward, customers must give consent before AT&T can add third-party charges to a billing statement, under terms of the agreement. Customers also will be informed of any charges separate of the bill.