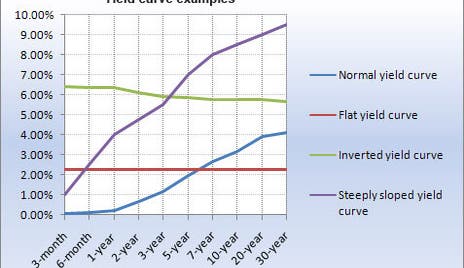 A term that gets bandied about in conversations on everything financial, from investing to the broad economy — the yield curve. Not only is it a leading indicator of what’s going on in the economy but it’s pertinent to investing in CDs.

The most common benchmarks when talking about “the” yield curve are U.S. Treasury bonds.

It refers to the graph formed by the relationship between yields and maturities.

“On the x-axis you have maturities and the y-axis you have the yield,” says Herbert Hopwood, CFP and president of Hopwood Financial Services in Great Falls, Va.

When it comes to CD or bond investing, the yield curve can tell you which way investors believe interest rates are going to go in the coming months.

There are four main types of yield curves, according to Hopwood.

A normal yield curve means that short-term maturities have lower yields than longer-term maturities and that yields continue to increase the further out you go on the maturity side.

“Normally people want to get compensated for tying up their money for a longer period of time,” says Hopwood.  And that is certainly true for people who invest in CDs.

The next type is a flat yield curve, when yields are basically the same for short-term and long-term maturities.

“Usually what that’s saying is that the economy is slowing down or the expectation is that it will be slowing down and inflation pressure will come off,” says Hopwood.

Of course, it’s not a certainty, the yield curve only reflects what the hive mind of the market believes will happen.

The third type of yield curve is inverted. By now, you can tell that this pattern means that maturities further out on the curve are yielding less than short-term maturities.

“If you’re expecting a mini-depression this is when you would see it. What you run into is a risk of deflation. Deflation is bad, bad, bad,” says Hopwood.

“If you are coming out of a recession that is typically where you see a sharp upwardly sloping yield curve, you may be expecting rates to go up in a big way,” Hopwood says.

For an investor interested in bonds or CDs, Hopwood says, “you would want to keep most of your maturities relatively short because the expectation would be that in the next six to 12 months you would be able to reinvest those monies in higher rates.

To hedge your bets, you could use CD ladders to avoid having to guess where interest rates are going.

“That’s why we ladder because you could be wrong. The concept here is that it’s giving you the idea of where the consensus is that the economy will be going and therefore how it will affect interest rates,” Hopwood says.

Have you seen the yield curve lately? What do you think it’s saying about where interest rates and yields on CDs are going in the future?