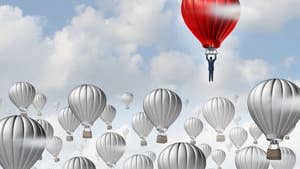 The underperformance is due to a few factors. One, for instance, is the skill of the managers of the fund. Size can also play a role in the predictability of returns.

The website Knowledge@Wharton reported on the research this week in an article titled, “‘Scale and skill’: Why it’s hard for managed funds to beat the indexers.”

To see whether the greatest impact comes from fund size or industry size, the researchers examined 3,126 funds from 1979 through 2011, a period of dramatic growth for the industry.

The study found mixed results when it looked at how the increase in an individual fund’s size affects performance, but it revealed a clear pattern. As the industry grew, performance got weaker. For example, if actively managed funds accounted for 60 percent of all stock market activity rather than 50 percent, active fund returns would be expected to decline by a fraction of a percentage point per month.

Here are some things that investors can learn from all the math and research.

“On average, younger funds outperform older funds,” says one of the professors involved with the study, Robert Stambaugh, Ph.D., the Miller Anderson & Sherrerd Professor of Finance at Wharton Business School.

Here’s how they tackled that in the research, from the paper “Scale and skill in active management.”

We sort funds into portfolios based on their age and ﬁnd that funds aged up to three years outperform those aged more than 10 years by a statistically signiﬁcant 0.90 percent per year, based on gross benchmark-adjusted returns.

Funds aged between three and six years also outperform the oldest funds. The young-minus-old portfolio diﬀerences are smaller when measured in net returns, suggesting that the younger funds capture a portion of their higher skill by charging higher fees.

There are two reasons for the outperformance of younger funds. Skill seems to be higher when the funds first come onto the scene.

“In essence, as new funds enter the market they start off with higher skill level, and then the performance that they obtain tends to erode over time, and the reason for that is the increasing industry size. As the size of the mutual fund industry increases, it hurts everyone’s returns because there is essentially more competition and more money-chasing after the opportunity,” Stambaugh says.

“More money-chasing after the mispricing means that mispricing will be eliminated to a greater degree,” he says.

Finding alpha in the mutual fund industry is not for the faint of heart or the uninformed. Do you try to outperform or do you stick with market returns?