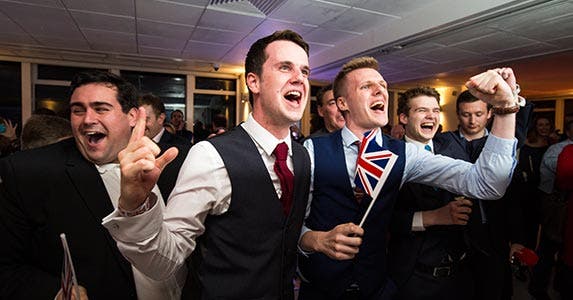 Today promises to be a bumpy ride in financial markets, now that voters in the United Kingdom have chosen to leave the European Union. Mortgage rates are likely to fall in coming days. In the longer run, the so-called Brexit could modestly slow the U.S. economy.

Markets are likely to gyrate downward today after their rise on Wednesday and Thursday as investors bet on Brexit’s rejection, says Greg McBride, CFA and chief financial analyst for Bankrate.com.

“We had a big relief rally in expectation of a ‘stay’ vote, so hold onto your hats because markets now have to reprice for the outcome,” McBride says. “Today will be an ugly day in global financial markets. But since nothing changes overnight, this presents an attractive buying opportunity.”

“The U.S. economy would likely not incur direct damage, but a fall in stocks and sharp rise in the dollar could slow the economy in coming quarters,” he says.

Plenty of uncertainty ahead

Britain’s exit from the EU increases the value of the dollar, which will push U.S. mortgage rates still lower. “This would create another mini refinance mortgage boom at financial institutions as homeowners rush to lock in near-historic low interest rates,” says Steve Rick, chief economist for CUNA Mutual Group.

As the votes were being counted and it became increasingly clear that voters had elected to leave the EU, the value of the British pound plummeted by more than 10% in relation to the dollar and the euro. As the pound weakens, the dollar grows stronger.

A stronger dollar has a downside, too. It will make U.S. exports more pricey. “That will be bad for the U.S. economy and our flagging manufacturing sector,” says AFL-CIO chief economist William Spriggs.

The Brexit will increase uncertainty about trade, tariffs and the timing of unwinding agreements with other countries and the EU, Rick says: “This will reduce the flow of investment into the U.K. and increase capital outflow into the U.S.”

Unwinding from EU gets complicated

The uncertainty resulting from the vote could be more long-term than people realize, says Tom Cassidy, chief investment officer of the Univest Wealth Management Division. Once the U.K. starts the process of leaving the 28-nation EU, it has 2 years to work out the arrangements of withdrawal.

Even if it takes 2 years to disconnect with the EU, no one is accounting for the process of reconnecting separately with those same countries, assuming there won’t be a backlash against Britain.

“Most people feel it will have a negative impact on economic growth within the U.K., just because people will not want to invest anything in the U.K. until everything is figured out,” Cassidy says.

“The impact, at least in my opinion, in the short term is going to be emotional,” Cassidy adds.

The U.K.’s credit rating could be downgraded as a result of the vote, according to Moody’s and Standard and Poor’s.