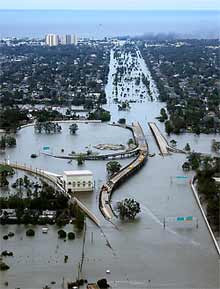 Flood flash: State Farm is opting out of the National Flood Insurance Program, or NFIP.

In a June 9 news release, one of the nation’s largest home insurance underwriters said it will cease writing new flood insurance policies as a participant in NFIP’s “Write Your Own” program beginning Oct. 1. State Farm said its agents will continue to help homeowners obtain flood insurance
coverage through NFIP Direct, a direct servicing program established by the Federal Emergency Management Administration, or FEMA, which oversees NFIP.

Existing State Farm-administered flood policies will be transferred to NFIP Direct over a 12-month period beginning Oct. 1, where they will be serviced by FEMA and government claims adjusters. State Farm will continue to handle flood claims that occur before the policies transfer until April 2012.

Although State Farm attempted to portray the move as amicable, the insurance company’s frustration with the on-again, off-again authorization of the troubled flood program proved an irreconcilable difference:

“Since 2002, there have been 11 last-minute reauthorizations of the National Flood Program, and on four occasions the program was allowed to lapse for extended periods of time. These ‘stop/start’ situations require a large company like State Farm to dedicate significant resources to address challenges and coordinate numerous communications with customers, employees and its more than 17,000 agents.”

The news came during the latest authorization lapse, the third in the past year, which began June 1 when Congress recessed without approving an extension.

State Farm spokesman Phil Supple told Insurance Journal that the company currently has more than 800,000 flood insurance policies, and that “the amount of paperwork involved when disruptions occur in the NFIP is overwhelming for the carrier.”

What impact do you think State Farm’s exit will have on NFIP? Will it merely weaken an already struggling program? Could it hasten reform?