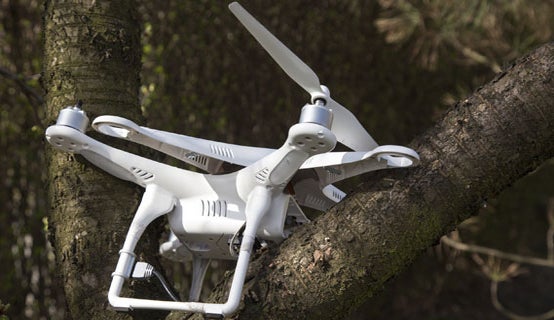 Make no mistake: Drone use is coming to a backyard near you. New unmanned, remote-controlled aerial drones with onboard cameras can be purchased online for under $1,000. Last week, I noticed that a used drone shop had popped up at my local farmers market.

The Consumer Electronics Association estimates that consumer drone purchases will increase 50% this year, putting an additional 300,000 more recreational drones in the skies.

While the Federal Aviation Administration wrings its hands over the threat that civilian drones pose to private and commercial aircraft, the insurance industry is weighing their potential impact on home insurance.

And little wonder. Say someone’s drone crash-lands on a neighbor’s car, snaps photos of children at play or adults at leisure in adjacent backyards without permission, or — worse yet — causes bodily injury to a neighbor or pet. Would the drone operator’s home insurance cover the damage?

Experts: ‘No doubt’ about coverage

“The standard homeowners’ policy provides coverage for damages the insured becomes legally obligated to pay because of bodily injury or property damage arising from an occurrence to which the policy applies,” write attorneys Tom Schrimpf and Russ Klingaman in Claims Journal. “Absent extenuating circumstances, there is no doubt this broad grant of coverage initially extends insurance for liability arising from recreational (drone) operations. However, this broad coverage may, of course, be limited by policy exclusions.”

While most home insurance policies exclude coverage for injuries or damage caused by the ownership, use or maintenance of “aircraft,” many would not place drone use in that category because drones are not designed to transport humans.

That said, home insurance coverage for drone use is certainly not a given.

For example, home insurance would not typically cover claims resulting from business use of a drone, such as taking aerial photos for real estate listings. Commercial drone operators avoid invasion-of-privacy claims by first obtaining signed consent from affected homeowners before filming.

Home insurance policies also often exclude coverage for intentional acts. That becomes problematic in drone incidents, where it can be difficult to separate the intentional from the accidental.

To further cloud the legal issue, some jurisdictions recognize invasion of privacy as purely an intentional act, thereby automatically excluding coverage in policies with an intentional-acts exclusion.

Schrimpf and Klingaman encourage would-be drone operators to look closely at the commercial-usage, “aircraft” and intentional-acts exclusions of their homeowners policy before liftoff.

Meanwhile, the FAA has cleared the way for home insurers to use drones for underwriting, surveys, risk assessment and documenting damage from natural disasters.