Cities put the freeze on sledding 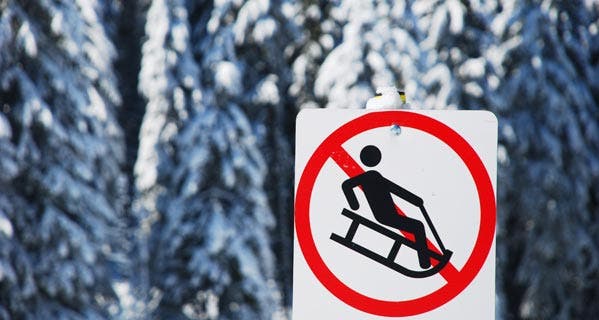 Put your sleds away, kids. The hill in your favorite park is off-limits.

That’s what city officials in Dubuque, Iowa, are telling residents this winter. Sledding has been banned in 48 out of 50 city parks, in a move meant to ease concerns about potential liability insurance claims stemming from sledding accidents.

“We have all kinds of parks that have hills on them,” Marie Ware, Dubuque’s leisure services manager, told The Associated Press. “We can’t manage the risk at all of those places.”

In a news release defending its action, Dubuque says other cities have taken similar steps, including Boone and Sioux City in Iowa, and Omaha, Nebraska. Some Midwestern communities have acted on a less harsh scale, such as by posting warning signs or banning select slopes, the AP reported, but those measures still expose the cities to the threat of lawsuits.

Dubuque officials say they made the tough and unpopular call to ban sledding after examining lawsuits in other parts of the Midwest, including a judgment in Omaha which resulted in a $2 million payout after a 5-year-old hit a tree while sledding and was paralyzed.

Omaha once had a ban in place on a hill after a legal defeat, but residents broke the rule in the name of fun. “It wasn’t practical,” the city’s assistant attorney Tom Mumgaard told the AP. “People wouldn’t abide by the ban.”

In another lawsuit, Sioux City, Iowa, took a $2.75 million hit from a man who injured his spinal cord after sliding into a sign.

Should your local government go the extra mile to make sure you don’t hurt yourself, or should that be left up to you?

Michigan resident Natasha Koss thinks people should take responsibility for themselves when sledding, and personally wouldn’t sue a city in the event of a mishap. “You need to have a mindset to make the best decisions for your own safety.”

Are you ready for a winter blizzard? Follow these tips to safeguard your family and your home.