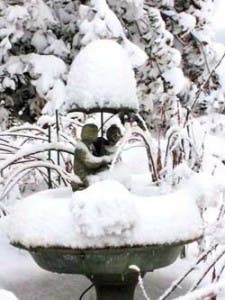 As Christmas miracles go, what happened last week in North Carolina totally rocked — as in free diamonds — and insurance made it happen. Well, insurance and more than eight inches of snow.

In my Christmas Eve blog, I showcased a festive two-week promotion by Wilmington jeweler Alan Perry, who pledged to refund every purchase made at his Perry’s Emporium jewelry store between Nov. 26 and Dec. 11 if three inches of snow fell at the Asheville airport on Christmas Day. (I incorrectly placed Perry and his pearls in Asheville. Probably the eggnog.)

The promotion was made financially possible by a weather-contingent insurance policy, an old product designed to save farmers from weather-related crop losses in much the same way that auto insurance or homeowners insurance cover us from perils. That product has since expanded to insure outdoor events and weather-bet promotions based on rainfall, snowfall and temperature extremes, tailored to auto dealers, time-share companies, travel agents and jewelers.

Perry’s first foray into a snow promo was a huge success. He sold a cool $500,000 in jewelry during the period. Statistically, the odds of any snow falling in Asheville on Christmas Day were roughly 3 percent. It had only happened twice in 60 years.

According to the Asheville Citizen-Times, Perry was chillin’ on the beach in Montego Bay, Jamaica, when his store manager e-mailed him with the news. I’m not sure, but I’m guessing that e-mail began with the word “Holy.”

The arctic express had buried the charming gateway to the Blue Mountains in 8.5 inches of the white stuff, prompting Perry — again, just guessing here — to order up another rum punch, pronto.

The jolly jeweler says it will take several weeks for his insurance company to settle his claim. The policy cost him 10 percent of his take, a small price to pay for all the additional sales.

But wait, there’s more: Perry is thinking about issuing the refund checks on Feb. 13, along with a promotion called “Second Chance” that will once again offer free jewels if it snows to a certain depth on Valentine’s Day.

“I have to find out what the insurance company will charge me,” Perry told the Citizen-Times.

My guess is they won’t even pick up the phone.