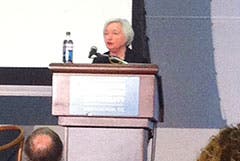 Federal Reserve Chair Janet Yellen says it’s too early to say if a series of softer-than-expected economic reports reflects something more serious than the impact of a severe winter.

Testifying Thursday before the Senate Banking Committee, Yellen noted that since her appearance before a House panel earlier this month, “A number of data releases have pointed to softer spending than many analysts expected. Part of that softness may reflect adverse weather conditions.” Specifically, she pointed to recent reports on employment, housing, retail sales and industrial production.

Yellen’s hearing on the Senate side of Capitol Hill had originally been scheduled for two weeks ago but was delayed — because of wintry conditions in Washington.

She indicates it will take some time to figure out what’s been happening with the economy. “In the weeks and months ahead, my colleagues and I will be attentive to signals that indicate whether the recovery is progressing in line with our earlier expectations,” she told senators.

The Labor Department is to release February employment data next week. Analysts are looking for another report with fewer than 200,000 jobs added, due in part to bad weather.

Sen. Charles Schumer, D-N.Y., asked if the Fed  might decide to stop cutting back on its asset purchases because of a weakening economy.

“I wouldn’t want to jump to conclusions here,” Yellen responded. She repeated that asset purchases — which the Fed had been using to stimulate the economy — are not on a “preset course.” Nevertheless, she indicated that further reductions in the program are likely if the recovery continues as expected.

Guidance: ‘We’re working on it’

With the jobless rate close to 6.5 percent, the Fed’s earlier-stated threshold for raising interest rates again, Yellen says central bank policymakers are continuing to wrestle with how to offer clues about future monetary policy. “There are many different views on our committee about what the right way is to cast forward guidance,” she told senators.

She noted that “the unemployment rate is not a sufficient statistic for the state of the labor market.” She says, for example, there’s “no hard and fast rule as to what constitutes full employment.”

At the same time, she says the Fed wants to provide financial markets with information about how it expects to manage monetary policy. The question has become more pressing after the unemployment rate dipped to 6.6 percent in January.

The Fed and Bitcoin

Yellen was asked about regulation of the digital currency Bitcoin. The question was posed by Sen. Joe Manchin, D-W.Va., who wrote to regulators pressing for a ban on Bitcoin, calling it “highly unstable and disruptive to our economy.” Just this week, the Japan-based Mt. Gox Bitcoin exchange was shuttered, raising the prospect that customers won’t be able to recover their funds.

Yellen says Bitcoin activity is “taking place entirely outside the banking industry” and that the Fed can’t currently play a role in serving as its watchdog. “There’s no intersection at all, in any way, between Bitcoin and banks that the Federal Reserve has the ability to supervise and regulate,” she told Manchin.

‘Why don’t you guys regulate Bitcoin?’

Published reports have indicated that federal authorities, including the FBI, are looking into the Mt. Gox matter. Yellen acknowledged that other regulators are concerned “about the potential for money laundering” via Bitcoin.

Turning the tables on lawmakers, she said, “It certainly would be appropriate, I think, for Congress to ask what the right legal structure would be for virtual currencies that involve nontraditional players that aren’t regulated.” The Fed chief cautioned that it would be a challenge to regulate Bitcoin because “there is no central issuer or network operator.”

The Fed’s next policy-setting session is set for mid-March.

Should the Fed regulate Bitcoin? And, do you fear the economy is weaker than what the Fed thinks?