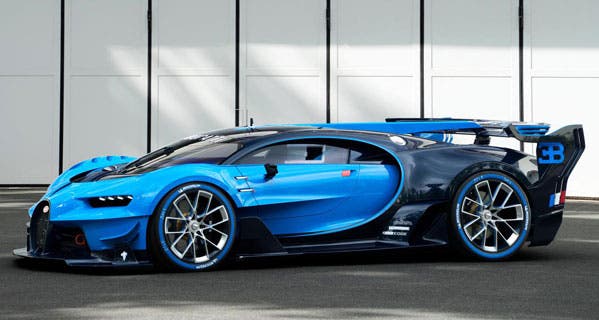 Bugatti has brought its Vision Gran Turismo, a car it designed exclusively for PlayStation’s Gran Turismo video game, to life as a show car it unveiled at the recent 66th International Motor Show in Frankfurt, Germany.

While the Vision Gran Turismo is based on cutting-edge motor-sport technology, its design pays homage to Bugatti’s racing tradition of the 1920s and 1930s, especially its victories in the 1937 and 1939 races of the 24 Hours of Le Mans with the Bugatti Type 57 Tank, yet also showcases Bugatti’s new design language for its future cars. The car begins a new chapter in Bugatti’s history that will culminate in the company unveiling a new super sports car.

“Our fans, who love the brand and have remained loyal to us for years throughout the world, are unlimited in number. This project is our way of thanking them for their loyalty and enthusiasm,” says Wolfgang Durheimer, president of Bugatti Automobiles, S.A.S.

Ettore Bugatti, who founded the company, was the first automaker to build street-legal versions of his compact and lightweight race cars, which were sold to amateur racing drivers. Bugatti holds the record for the world’s fastest street-legal production vehicle at 267.86 mph, as well as for the world’s fastest production roadster, clocked at 254.04 mph.

Thinking of trading up to a sleek sports car? Check your credit score for free at myBankrate before going to the dealer.

Bugatti’s engineering team has calculated that the Bugatti Vision Gran Turismo can drive at over 250 mph on 4 sections of the virtual Le Mans track.

Be the envy of your neighborhood with one of these 5 hot, sporty cars to turn heads.