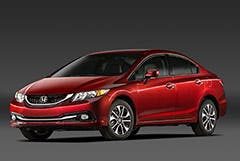 Six more cars have earned the top crash-test rating from the Insurance Institute for Highway Safety, or IIHS. The agency has been testing 2013 and 2014 model year vehicles with the new test — the small overlap front crash test — throughout this year, and many cars have not scored well.

The test replicates a crash where the front corner of the car collides with an object such as a tree or utility pole. Cars that get top marks in crash tests often have lower car insurance rates than similar models with lower crash test scores, since these cars tend to protect their occupants from injury better.

The five cars that did get the top rating, top safety pick plus, all scored well in the new test. The five vehicles were the Honda Civic coupe, Honda Civic sedan, Lincoln MKZ, Mazda 6, Subaru Forester and Volvo XC90. All the cars were 2013 model year vehicles, except for the Mazda 6 and Subaru Forester, which are 2014 models.

Do you drive any of these cars? Do you feel safer driving them?