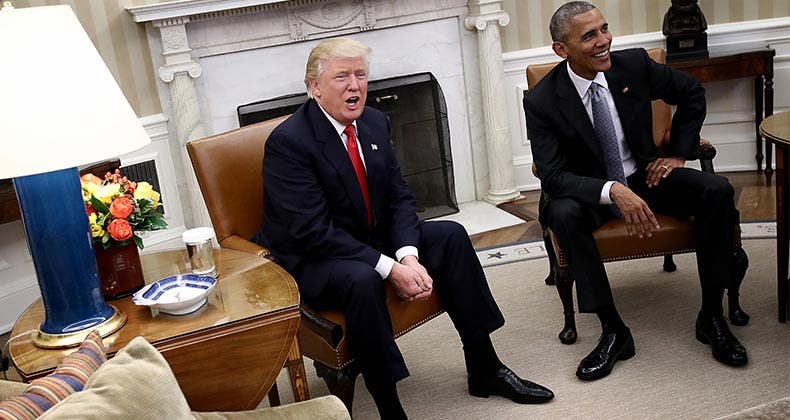 There’s little doubt that the election of Donald Trump and the unified Republican control of Congress means something for banks and their customers. It’s just hard to know what that something is.

Trump’s most concrete policy proposal on banking echoed those espoused by many Republicans over the past few years – repeal Dodd-Frank.

Over the course of the campaign, he echoed that statement many times, telling The Hill in October “Under Dodd-Frank, the regulators are running the banks,” Trump said. “The bankers are petrified of the regulators. And the problem is that the banks aren’t loaning money to people who will create jobs.”

At times, though, he has also called for the reinstatement of Glass-Steagall, the law that once prohibited commercial banks which take deposits and make loans from engaging in investment banking and other financial services. That would effectively break up many large U.S. banks.

Then, this Thursday, his transition team posted a statement pledging to “dismantle” the law:

The Dodd-Frank economy does not work for working people. Bureaucratic red tape and Washington mandates are not the answer. The Financial Services Policy Implementation team will be working to dismantle the Dodd-Frank Act and replace it with new policies to encourage economic growth and job creation.

The truth is, we really don’t know much about how he’ll dismantle Dodd-Frank, or what he would put in its place, says Ben Knieff, a senior research analyst at Aite Group.

“In all honesty, your guess is as good as mine,” Knieff says. “From a policy perspective, it’s not clear. We have some public statements, we have some ideas, but many of them are impractical.”

Kneiff isn’t even sure Trump is ready to follow through on his promise to kill off Dodd-Frank.

“I don’t think that it’s possible to completely roll back Dodd-Frank,” Knieff says. “I think there are too many strong consumer protections. I think the CFPB, for all the flaws it might have, is a valuable institution for the American people.”

Here are some changes that you might see in the near future, and some that could be years in the future.

The most immediate change is likely to be a leadership change at the Consumer Financial Protection Bureau. Last month, the DC Circuit Court handed down a ruling that effectively will give President Trump the ability to fire current CFPB Director Richard Cordray and replace him, likely with someone more friendly to the industry, says Christopher Peterson, John J. Flynn-endowed professor of law at the University of Utah.

“I’m sure that one of the questions that’s going to be asked at the Bureau is whether or not once Donald Trump is inaugurated, he will ask for the resignation of Director Cordray, and that obviously would change the direction of the agency significantly,” Peterson says. “Who would step up and serve as an acting director? How quickly could President Trump get a new director confirmed? All of those things would duly reshape the direction of the Bureau potentially.”

Arthur Wilmarth, a professor of law at George Washington University, says he’s not so sure that Trump’s choices for regulators will be more bank-friendly than Hillary Clinton’s would have been, given the latter candidate’s close relationships with Wall Street.

One name he thinks may fit in with Trump’s vision of how banks should be regulated is Thomas Hoenig, vice chairman of the FDIC.

Wilmarth also sees financial regulation being influenced by Trump’s picks for the Federal Reserve, which handles much of the supervision of large banks under Dodd-Frank.

New law weakening or dissolving the CFPB is possible

There’s a possibility that Trump and a Republican-controlled Congress will pursue legislation to significantly weaken or even eliminate the CFPB altogether, Peterson says.

A bill introduced this year by Rep. Jeb Hensarling, R-Texas, would rename the CFPB the “Consumer Financial Opportunity Commission” and replace the director of the CFPB with a five-person board, similar to the structure of the Federal Communications Commission. It would also subject the agency to the congressional appropriations process, leaving the door open for opponents in Congress to drain the agency’s resources and scale back its enforcement efforts.

“I think that the thing the financial industry is going to press for the most is to eliminate funding or bring the CFPB under normal funding procedures, where they can gradually strangle the Agency over time, in much the same way that they have some of the other agencies,” Peterson says.

Standing in the way of the Hensarling bill or a similar one would be Senate Democrats, at least one of whom, Sen. Elizabeth Warren, would likely filibuster the bill to prevent it passing in the Senate, Peterson says.

Peterson doesn’t expect to see a total dissolution of the agency, but “if the Congress and the President go down that path, it will be a major setback for consumers,” he says. “It facilitated billions of dollars of restitution to consumers who were cheated and had managed to create a stable equilibrium in our mortgage markets. And the loss of that progress will be a tragedy for the country.”

For his part, Wilmarth is optimistic that Trump will leave the agency mostly intact.

“It wouldn’t shock me if they decided to make it a multi-member commission,” he says. “I find it hard to believe that they would take away its powers or take away its funding process.”

For a candidate who has pledged to keep Wall Street in line, destroying the CFPB might not be smart politically, Wilmarth says.

“This is an agency that has done some things that have been very popular,” he says. “If you ask how many people think they shouldn’t have gone after Wells Fargo, I suspect not many people out there would have raised their hands and said, ‘They should have left Wells Fargo alone.'”

Community bank and credit union customers could see their banks on stronger financial footing under Trump’s policies, Wilmarth says. He thinks Trump may support regulatory relief for small banks, which have struggled with the costs of complying with the Dodd-Frank financial reform law, in the form of a bill like the “Financial Regulatory Improvement Act” proposed by Senator Richard Shelby, R-Ala., last year.

That act would have easy privacy disclosure requirements for smaller institutions and exempted them from the so-called Volcker Rule prohibiting banks from investing their own money in risky investments.

“Community banks, I think, are the best situated to get favorable regulation,” he says. “I would think the Regulatory Relief bill that would not move in Congress because Wall Street said it would not move until they got what they wanted — I would be interested to see if that situation changes.”

Changes to safety and soundness rules

Wilmarth expects a revamp of Dodd-Frank to retain most of the safeguards established by Dodd-Frank to prevent a future financial crisis, especially those designed to monitor the largest so-called “systemically important financial institutions” big enough to crash the economy if they failed.

“I kind of find it hard to believe that they would remove all of the SIFI related issues, including the orderly liquidation act without a pretty careful consideration of what they would do to replace it,” he says. “I think anyone who thinks you can just simply take that away and replace it with nothing is asking for a repetition of 2008.”

While Wilmarth acknowledges that Hensarling’s bill would essentially remove most of that framework and that there will likely be pressure from Wall Street to do just that, he doesn’t believe that Trump will necessarily be willing to go along with that approach. In particular, he expects the resolution authority established by Dodd-Frank that would be able to fund a winding-down of a major bank during a crisis to remain.

“Would he really want to alienate segments of his coalition that I think would not react favorably to the notion of ‘Oh, now you’re doing this to really help out the megabanks?'” Wilmarth says.