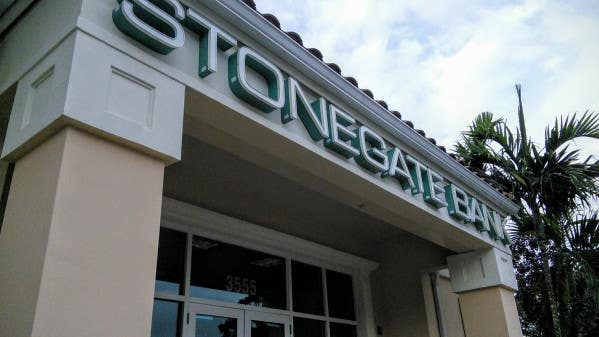 Want to use a debit card in Cuba? Have I got a bank for you — the operative word being “a.” Just 1 U.S. bank can currently issue a debit card that’s usable in Cuba: Stonegate Bank, based in Pompano Beach, Florida.

Why Stonegate does it

To find out how a bank with just over $2 billion in assets and only 21 branches became the sole U.S. bank operating in Cuba, I spoke with Stonegate CEO Dave Seleski. Turns out, it came down to being the only bank willing to fill a State Department need: providing banking services for the Cuban Interests Section, the precursor to the recently opened U.S. Embassy in Cuba.

“The Cuban Interests Section had been without banking services for 15 months. It was a huge problem for them — processing visa fees, birth certificates, death certificates — that sort of thing,” Seleski says. “They were literally taking big suitcases full of cash down to Havana and it was a big holdup in negotiations between the Cuban government and the U.S. government to open an embassy.”

When Stonegate made the decision to help, Seleski says it was more about facilitating diplomacy than generating a return.

“I had been to Cuba and I had seen how dysfunctional the whole relationship was politically, but how close the countries are culturally. For us, originally the decision was just to bank the embassy to help that process forward diplomatically to ultimately help the Cuban people. It wasn’t like this was a 5-year strategic plan that we had come up with,” he says.

From there, Stonegate established ties with Cuba’s central bank, “one thing led to the next,” and soon they had a correspondent banking relationship that allowed them to transfer funds in and out of the country, Seleski says.

Why did the State Department pick Stonegate? It didn’t, at least not at first.

“They actually tried to get a lot of banks to do it,” Seleski says, “but they couldn’t get anybody to do it.”

But having been to Cuba several times since 2011 to service a client and having grown up in South Florida, where ties to Cuba remain strong, Seleski was willing to venture where “a bank president in Iowa who’s never been to Cuba and never met a Cuban American” might fear to tread, he says.

Seleski isn’t surprised that other banks have yet to follow Stonegate’s lead, preferring to wait and see if his bank runs into regulatory problems or other roadblocks.

“For a bank to get involved, there has to be a profit motive, and just transferring money when the risk of making a bad transfer — you could get fined — it doesn’t really make you feel warm and fuzzy making a $60 wire transfer fee,” he says.

Political uncertainty is another factor — a lot is riding on the November election, where the candidates have wildly divergent views on whether opening up Cuba is right for the United States.

“As time goes by, and as there’s more connectivity between the two countries, I think there’ll be a lot more banks that get involved at that point.”

While the company has yet to make much money from the move, being the only U.S. bank in Cuba does have its advantages, he says.

“A lot of people didn’t know who we are and now they do,” Seleski says. “You can’t put a price tag on that.”