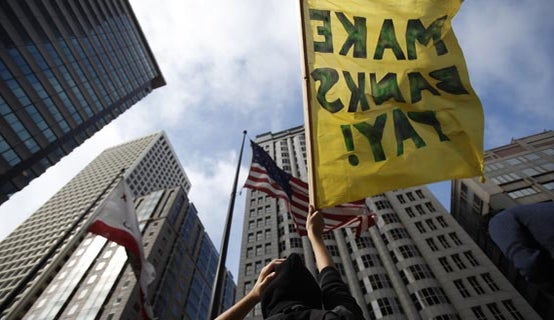 The idea of Uncle Sam breaking up the country’s biggest banks may sound far-fetched, but most Americans are actually in favor of doing just that.

A poll released this week by the Progressive Change Institute showed 58 percent of Americans support breaking up “big banks like Citigroup, which played a big role in the financial crisis and recently demonstrated they still have too much power by lobbying for and winning the repeal of a major reform designed to stop Wall Street abuse and taxpayer bailouts.”

Breaking up the nation’s largest banks isn’t a new idea. Everyone from a former Citigroup CEO to a prominent Republican senator to many bank company shareholders have expressed support for the idea.

In fact, a 2013 Rasmussen poll had almost identical results, with 50 percent of Americans favoring a breakup of “megabanks.”

So why hasn’t the concept made it into law?

It’s not as if legislators haven’t tried. Sen. Sherrod Brown (D-Ohio) and Sen. David Vitter (R-La.) introduced a bill in 2013 that would have forced banks with more than $500 billion in assets to meet much tougher capital standards. That would have encouraged the largest banks to consider splitting up to avoid the increased cost of holding additional equity and less debt.

But Brown-Vitter had trouble attracting support in the Senate and has yet to go anywhere. That the finance industry is one of the biggest donors in campaign finance may be a factor. As of Nov. 16, the Wall Street banks and other financial interests spent $1.2 billion on campaign contributions and lobbying combined, according to Americans for Financial Reform.

In fact, just last month big banks won a key victory with the repeal of a Dodd-Frank measure that would have forced banks to push out some of their largest derivatives transactions to subsidiaries.

What do you think? Should the big banks be broken up?