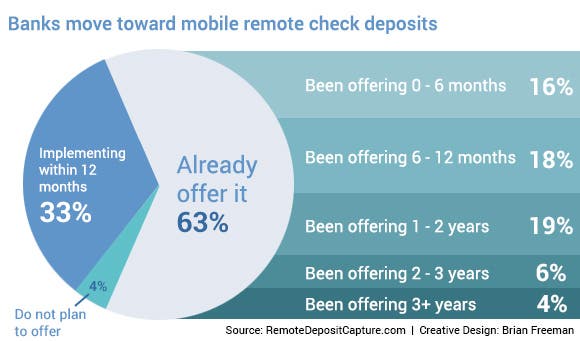 >Only a few years ago, the idea of taking a picture of a check with your cellphone and using that image to deposit money into your bank account was a pretty novel idea.

Now, nearly two-thirds of financial institutions offer some kind of mobile remote deposit capture, according to a survey released this week of 250 banks and credit unions. Another 33 percent of respondents say they plan to implement the technology within the next 12 months.

“The mobile RDC industry has truly reached a tipping point,” says John Leekley, founder and CEO of RemoteDepositCapture.com, which conducted the study.

With the adoption of the technology comes worries about fraud — notably with fraudsters double-depositing checks. For instance, a fraudster might deposit a check using his or her phone, then later deposit the check again at a bank branch.

Julie Conroy, a research director with Aite Group who covers banking and fraud, says she’s had a number of conversations with banks that are seeing fraud in mobile check deposit “at a rate that is disproportionately high compared to traditional channels.” Of course, that proportion can be a bit out of whack, given the relatively small transaction value of mobile deposited checks versus other deposit channels, she says.

She says different financial institutions are having varying levels of problems with fraud in this area depending on how restrictive their rules are on mobile check capture.

“There’s no question that there are gaps in the duplicate deposit detection, and criminals are finding them, though perhaps not in great numbers relative to other attack vectors,” Conroy says.

Banks are working to mitigate the amount of risk they take on with mobile deposit capture.

The Federal Financial Institutions Examination Council has had security guidelines for mobile remote deposit capture since 2009 that many banks use when setting their own practices.

More than 8 in 10 banks using the technology set limits on how much can be deposited, while 54 percent set limits on deposit volume, the survey found. Nearly three-quarters use image-quality analysis to check for fraud, and 43 percent said they delay the availability of funds deposited through mobile check capture.

However, the report also says that “despite concerns about duplicate deposits, only 49 percent use cross-channel duplicate detection.”

A 2013 survey by ath Power Consulting, a financial services research and strategy firm, found that mobile remote deposit capture is the “most sought-after mobile banking feature” among consumers.

Oleg Korneitchouk, a 23-year-old New Jersey web designer, says he has been using mobile check deposit since he upgraded his cellphone to one that could take high-quality pictures.

He says he gets four or five checks per month from clients that he deposits that way. “Running to the bank all the time uses a lot of time,” he says.

Korneitchouk, who uses the Chase QuickDeposit mobile banking app, says he’d use the mobile check deposit option even more if there weren’t limits on how much he can deposit using that method. Chase has restrictions that only allow up to $2,000 per mobile deposit and up to $5,000 total per month.

Bankrate’s Dr. Don has information on how long to wait after a check deposit before you withdraw funds.