Storm warning: Know how to prepare your home for a blizzard 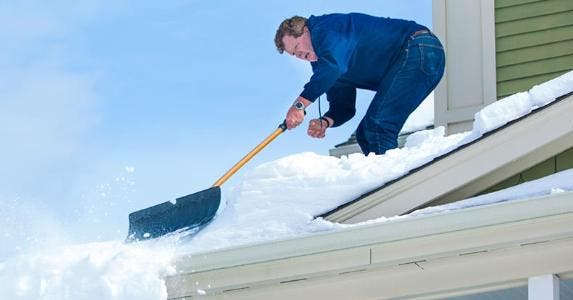 A blizzard can dump snow so hard and fast that you suddenly find a giant blanket of white hanging over your house. You worry about whether your roof can support so much frozen water, so up the ladder you go to shovel some of it off. And you slip and fall.

Or maybe the water pipes freeze and burst after days without power and heat. And you need groceries, but the plows haven’t cleared the streets yet.

Blizzards are a winter wonder, all right. But they’re also potentially dangerous disasters that can disrupt lives and wreak havoc on a home.

Preparing the house inside and out is your best protection. But give yourself plenty of time, and heed weather warnings.

“I think people underestimate snow,” says John Lindsay, a member of the American Red Cross Scientific Advisory Council. “They may not appreciate how heavy it can get. It’s hard to shovel, it brings down power lines, and it blocks roads. And their 4-wheel-drive SUVs won’t get through everything.”

Follow these tips to safeguard your home and family.

Most roofs can support 20 pounds per square foot of snow, according to the Insurance Institute for Business & Home Safety, or IBHS.

Homes in areas prone to heavy snow may have been designed to handle even more than that. Your local building department will know if your home is one of them.

Gauge the weight of snow and ice on your roof after a winter blizzard using these IBHS guidelines.

The steeper the roof, the less that snow accumulates. But if a portion of your roof is flat, such as over a porch, take extra care to prevent snow and ice buildup there during a winter storm.

And for safety, just stay off that ladder. “The biggest danger is trying to go out and scrape snow off the roof yourself,” says Tim Reinhold, IBHS senior vice president of research and chief engineer.

Use a snow rake, and stay safely on the ground, he advises. For multistory roofs, hire a snow-removal contractor.

If temperatures drop too low in your house during a power outage or furnace malfunction, pipes can freeze. If they burst, water leaks can cause extensive damage.

There are several ways to prevent this, according to IBHS. They include:

You also can use “heat tape” — electrified wrapping — to warm pipes. Blume advises having an electrician install it.

Ice buildups at the roof edge or around drains keep melting snow from draining properly. This backs up, or dams, water into walls, ceilings and insulation.

Stopping ice and snow from accumulating during winter blizzards is key. Inspect your roof’s drainage, keep gutters and downspouts clean, and trim trees to keep leaves to a minimum, advises IBHS.

Add insulation above the ceiling and increase roof ventilation to make the roof area warmer and prevent ice buildup.

You can even install self-regulating heat cables on gutters, downspouts and roof drains.

Use caution with alternative heat sources

Space heaters — including electric, gas, pellet and wood stoves — can be great alternatives to constantly running the furnace and heating the entire house. The nonelectric heaters can also be helpful if the power goes out — taking the heat with it — during a blizzard or other wintry natural disaster.

But take care when installing or placing heaters, and make sure they meet standards and codes. Know how to use and maintain them. Otherwise, you risk a fire.

According to the most recent estimates from the National Fire Protection Association, home fires involving heating equipment caused $893 million in direct property damage and 400 civilian deaths in 2011.

Often, these fires are caused by equipment that wasn’t kept clean or was placed too close to something that could ignite.