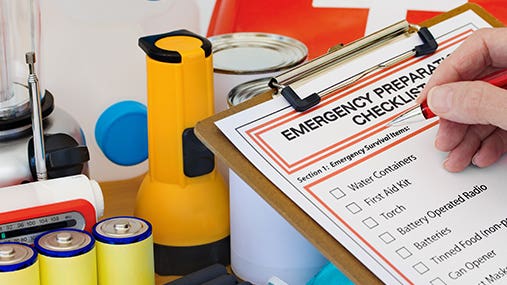 The end is always near for so-called doomsday preppers. But instead of walking around with a placard strung around their necks waiting for the inevitable, these disaster survivalists invest their own money on equipment and supplies to outlast the day of reckoning.

The key is to set a budget within your means, improve survival skills and prepare for the likeliest disasters without going nuts, experienced preppers say.

“It’s a cottage industry, and there’s a lot of fear-based marketing,” says Paul Purcell, an Atlanta-based terrorism and natural disaster preparedness trainer and author of “Disaster Prep 101.” So folks tend to either ignore preparedness or go way overboard.

The most laid-back prepper can invest in a basic three-day survival kit for around $100. That will get them such items as a flashlight, batteries, water, dehydrated food and first-aid gear. But more serious doomsday preppers can easily spend thousands of dollars on advanced gear, says Brandon Garrett, spokesman for The Ready Store, a Draper, Utah, retailer that sells survival supplies.

“We get people who are looking to survive in any situation,” Garrett says. “Advanced kits range from $300 up to $4,000, and some customers spend beyond that, buying all kinds of extra gear like generators and water-purification systems.”

While it’s easy to load up on gear, it’s critical to set a budget, says Bernie Carr, a Houston-based health care professional who first became interested in prepping after riding out Hurricane Ike in 2008. Carr, who now operates the blog “Apartment Prepper,” says most people don’t have the financial wherewithal to buy all that gear, and for many, it just doesn’t make sense.

“I think of it like insurance,” she says. “You always want to have it, but you never want to use it.”

To set a budget, Carr says it’s best to focus on likely threats. As a Houston resident, she weighs her budget against two common disaster scenarios: hurricanes and tornadoes. Other less likely events don’t get much of Carr’s budget, which is about $100 per month for restocking water, canned food and a few other supplies.

“There are people out there stocking up on guns and gold because they think we’re on the verge of financial collapse,” Carr says, “but there’s probably a greater likelihood of getting laid off.”

It’s also a good idea to invest in your skills because there’s no guarantee you’ll be near all your gear when a disaster strikes, Purcell says. Consider all the stranded motorists this year in Atlanta after a 2-inch snowfall shut down the entire metro area.

“I tell people to make sure they know how to do useful things,” he says. “Cooking is an important skill because in a disaster, you’re going to have to make do with what you’ve got. You should also know first aid, CPR and how to change a tire.”

But while the subjects on shows such as “Doomsday Preppers” on the National Geographic Channel and other survivalists like to tout extreme skills such as using sniper rifles or eating bugs, Purcell says you need to be more realistic.

“It’s really about taking your current skill level and building on it,” he says. “You need to find a balance with what you’re doing and approach preparedness with moderation.”

If money is no object

On the other hand, there are those for whom money is no object when it comes to prepping. For them, preparedness drives every decision, and the costs can stretch into the hundreds of thousands of dollars because even their home is considered survival gear.

One company that builds homes specifically for doomsday preppers is Monolithic Inc., an Italy, Texas, firm that specializes in steel-reinforced concrete domes marketed to those who are concerned with surviving a disaster.

“Monolithic domes cost about as much as a conventional home,” says David South, president and founder of the company. “Across the Midwest and the South, it would cost about $120 per square foot. However, homes in California or the Northeast will cost substantially more.”

But while the cost of building a disaster-proof home may generally be in line with home prices, buyers do pay a prepping premium. According to the company, most customers choose to pay cash because mortgages on domes can be hard to get.

If it feels like survivalists and doomsday scenarios have become a bigger part of the pop culture lately, it’s because they have, says Purcell, who has been teaching security for more than a decade.

“These things are cyclical,” he says. “While it’s always good to be prepared, there are definitely security booms. Today we have a lot of economic fears, but after 9/11 it was terrorism, and before that, it was Y2K.”

Most of the headline-grabbing fears don’t come to pass. But, with each new threat, many people are tempted to overspend on preparation, Purcell says.

“Going over budget on your security puts you at risk, too,” he says. “So it’s just as important to stick to a budget as it is to be prepared.”