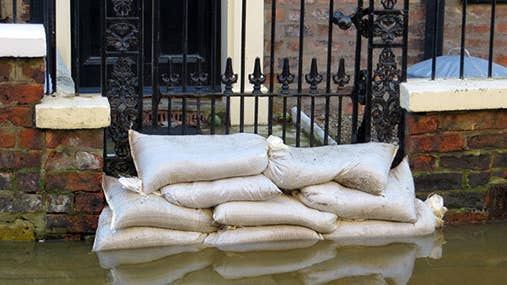 While Sandy is fresh in our minds, it’s far from the first storm to cause flooding in basements. Losing electrical power can lead to basement flooding if your sump pump only uses electricity. That increases your chance of damaged stored items and mold growth. Plus, staying warm becomes a challenge as the temperature drops and you can’t turn on your heater.

“If you don’t have any power in your house and you have water in the basement, you shouldn’t be in the house,” says Steve MacDonald, a spokesman for the Boston Fire Department, who says safety is the foremost issue.

Even sharing power with a neighbor via extension cord is unsafe, he says. “It’s good to charge your cellphone or plug the lamp in, but not to run a household. Unless you have commercial-grade extension cords, they’re not made for that purpose,” he says.

Once you’re ready to tackle the basement, you’ll need to decide if you’re bringing in a basement contractor or going the do-it-yourself route, which can be cheaper and just as effective as hiring someone.

If your basement is flooded with water from the storm, the first order of business is drying it out. If you already have a sump pump installed, it should start working as soon as electricity is restored, says Doug Lynch, owner of A-1 Basement Solutions in Scotch Plains, N.J.

Don’t go in the basement if it floods and you have power, says the New York State Electric and Gas Company, because energized outlets and wiring below the flood water pose an electrocution hazard. Make sure your energy company has turned off power to your house before you enter a flooded basement.

MacDonald says to use common sense if running the sump pump from a basement outlet, and make sure the outlet is completely dry. “If the outlets are in water or were soaking in water, you’re not going to use them,” he says.

If you don’t have a sump pump or need a more powerful one, they’re available at home improvement stores, says MacDonald.

Sump pumps can also be rented, says Phyllis Stone, a homeowner in Mount Kisco, N.Y., who rented one when her basement flooded during a past storm.

If you have a larger amount of water, in the several-feet range, you’ll need to call a professional company, says MacDonald. They’ll have the equipment to get it done quickly and safely.

Some older homes have clean-out plugs that connect to the sewer system, recessed below the floor level, says Lynch. These plugs are used to drain a flooded basement. Lynch says only people who feel comfortable using the plugs should remove them to drain water. “You open the floor drain that leads into the sanitary system and clear out the basement water,” he says, adding that as soon as the water is drained, the cap should go back on because sewage gas or actual sewage can back up into your basement.

Drying out the basement

After the flood water is pumped out, Lynch recommends opening the basement windows to increase air circulation and decrease the possibility of mold. “Put all the ventilation possible into the basement to dry it out before mold spreads.”

Fans also help with circulation and ventilation. After her basement was drained, “my husband rigged up all the fans in the house,” says Stone. As the basement began to dry out, her husband then ripped up carpet as well. Stone says they saved several thousand dollars by drying out the basement themselves instead of hiring a company to do it for them.

If the carpet is too wet, towels can be used to sop up the extra water before removing the carpet. Wet and ruined furniture should be removed as soon as possible as well, along with anything else that may have gotten wet in the flood.

“Mold has two natural enemies,” says Lynch, “ventilation and sunlight.” While it may not be possible to bring sunlight into certain parts of the basement, it is possible to increase the ventilation by opening windows and using fans.

Lynch also recommends immediately throwing out anything that’s wet and made of a porous organic substance, such as cardboard boxes or newspaper, as they are food for mold.

If significant parts of the drywall have been saturated, you’ll need to cut it out and replace it, says Lynch. “However, if there is just superficial wetness, 10 square feet or less, it can be dried out.”

Once the basement is dry, Lynch recommends using a bleach product to kill mold on a preventive basis. When using the bleach, “wear protective eye covering and a mask,” he says.

Lynch adds that mold test kits, available online, are an inexpensive way to ensure you don’t have mold. “You can do a mold test in one minute. They work really well for people who think they have mold but really don’t, and it gives them peace of mind.”

Stone says that after ripping out their damaged walls, they put in mold and water-resistant walls instead. “When you pick up drywall, it’s white. This is green,” she says. “It’s not supposed to grow mold.” Now, if the newly installed sump pump and battery backup sump pump fail, “I’d like to think the walls wouldn’t be ruined.”

To prevent future basement floods, Stone says their battery backup sump pump should last six to 12 hours, and they ordered a generator to use in case of longer power outages. Longer-term battery backup systems are available, says Lynch, who sells a seven-day battery backup pump and a water-powered emergency sump pump that work after power failure.

Following Superstorm Sandy, the temperature significantly dropped. Having a damp house without power can mean you and your family could be facing extreme cold indoors because “most alternative heating sources involve electricity,” MacDonald says.

“If there’s no heat and it’s cold inside, frankly you shouldn’t be there. It’s an unsafe condition,” he says. He suggests finding an available hotel or staying with friends and family if you can’t afford a room.

However, if you are unable to leave, wearing additional clothes and blankets is the most obvious safe solution, as you risk carbon monoxide poisoning by using a gas stove or anything burning fossil fuel inside, says MacDonald.

If you’re able to hook up a generator, MacDonald urges you to keep it outside and away from windows where fumes can enter the house. He also advises keeping portable heaters away from anything flammable. “The rule is to keep combustible material at least 3 feet away from it,” he says. Remember, too, that portable heaters are meant to augment an existing heating system, not be the sole source of heat.

Fireplaces can also be a good alternative, says MacDonald, though only while you’re alert. “If it’s in good working order, you can safely have a fire in the fireplace. That’s the purpose — to burn logs,” he says, as long as you do it with caution. “You don’t put a roaring fire in there and try to sleep. This isn’t the great outdoors or the Wild West. You don’t leave a fire roaring in the fireplace unattended.”