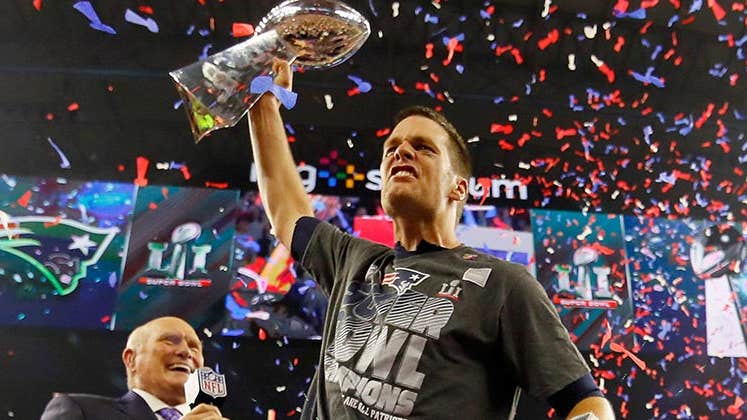 Except in a handful of states, betting on sports events is illegal. But that doesn’t stop many Americans from putting money on their favorite team, particularly for the biggest NFL game of the season.

The Super Bowl is the most gambled-on sporting event in the United States, with more than $100 million wagered on the game in some years. And that’s just the legal betting at sports books in Nevada, where federal law allows sports gambling.

Bets totaling more than $132.5 million were legally placed on the Super Bowl in Nevada in 2016, according to data from the Nevada Gaming Control Board. But that figure is dwarfed by illegal bets.

The American Gaming Association estimates that Americans wagered in excess of $4 billion on Super Bowl LI.

Unless everyone reports their winnings on their tax returns, the U.S. Treasury is missing out on an enormous amount of revenue since gambling winnings, whether obtained legally or illegally, are taxable.

But good luck, IRS collections agents, on getting your hands on ill-gotten gambling gains.

The federal tax agency has enough trouble collecting from legal bettors. Many people don’t realize gambling winnings are taxable income. And even if the winners know that, a good many simply choose to ignore the tax law.

What the IRS knows

This skirting of tax laws is possible because the IRS doesn’t know about every bet, and it is only aware of the big winners.

Legal betting operations — state lotteries, casinos and horse-racing tracks — are regulated, and that means there are rules for reporting when players are paid. Overall, according to a recent study by the Rockefeller Institute, gambling accounts for nearly $28 billion a year in tax revenue.

Source: The Nelson A. Rockefeller Institute of Government

In some cases, the IRS gets its portion when winners are paid. For example, 25 percent is withheld from winnings of more than $5,000 from any sweepstakes, wagering pool or lottery or from betting proceeds that are 300 times or more the amount of the bet.

Gambling winnings from bingo, keno and the slots are not generally subject to withholding, but you still must give the gambling establishment your tax ID, i.e., your Social Security number. If you refuse, the casino can assess backup withholding of your jackpot at a 28 percent rate.

Regardless of whether money is withheld, when a casino or other betting operation gets your tax ID, your winnings show up on a Form W-2G.

But even if you don’t get an official form, you’re still supposed to report all your gambling winnings to the IRS. In reality, that doesn’t happen.

The IRS has no official idea how much tax money it doesn’t collect from lucky gamblers. But even if the tax agency ventured a guess, it likely would be low, since there are so many under-the-radar ways for gamblers to play.

One of the major gambling venues nowadays is online. And despite efforts to control internet gambling, U.S. bettors are still frequenting the websites, with many not telling the IRS about their winnings.

Federal lawmakers tried to put a dent in online gambling with enactment in 2006 of the Unlawful Internet Gambling Enforcement Act. The law is designed to restrict U.S. gamblers’ access to online, foreign-based websites.

The law, however, hasn’t affected players as much as it has payment processors, says Brad Polizzano, tax manager at Baker Tilly Virchow Krause, LLP.

Polizzano points to the U.S. Department of Justice’s seizure in April 2011 of the internet domains of the three biggest offshore online gambling sites operating in the U.S. at the time: Full Tilt Poker, PokerStars and Absolute Poker/UltimateBet.

In addition, several of these sites’ principals, as well as individuals processing financial transactions to and from these sites, were indicted for bank fraud, illegal gambling and money laundering, says Polizzano.

But more recently, some states have taken a “if you can’t beat them, join them” approach. Nevada allows companies in the Silver State to apply for licenses to operate poker websites. New Jersey, home to Atlantic City’s casinos, also offers online poker and other gambling options.

Complicating the online betting issue is the popularity of fantasy sports games.

The biggest operators of these websites, Draft Kings and FanDuel, which are planning a merger, argue that they are games of skill. Participants, they say, rely on their knowledge of the real sports leagues, teams and players in order to win money on the corresponding fake teams and players they select.

Opponents of the fantasy sites argue that they are thinly veiled online gambling.

State attorneys general in several states agree and have shut down the fantasy sites in those jurisdictions. Several members of Congress have called for investigation of the fantasy sports industry.

With the popularity of online betting and fantasy sports increasing, there is growing interest in legalizing the practice. In 2016, eight states, including New York, passed bills to legalize and regulate fantasy sports, and other states are following suit. This trend should help state revenue departments and the IRS enforce tax compliance in connection with winnings.

Polizzano, who is known on social media as “TaxDood,” says there are three tax areas that many gamblers don’t understand well.

One is the difference between recreational and professional gambling. Most people fall into the recreational category; they visit a casino or racetrack a couple of times per year and buy lottery tickets.

In these cases, any winnings should be reported to the IRS as “other” income. Recreational gamblers also can reduce the amount of their taxable winnings by itemizing their expenses and counting gambling losses as a deduction in the “other miscellaneous deductions” category of Schedule A.

Professional gamblers, on the other hand, essentially gamble regularly with the intent to profit enough to earn a living. The tax court ruling that set up the standards for professional gambling, says Polizzano, “basically requires people to file one way or the other, professional or recreational.”

“A lot of gamblers think they can file any way that minimizes their tax burden,” he says. “But they really don’t have a choice. They must pick one category or the other.”

And while the tax code generally is very harsh toward gamblers, says Polizzano, professional gamblers got some good news from the U.S. Tax Court. In Mayo v. Commissioner, the court held that a professional gambler may deduct “ordinary and necessary” business expenses beyond the extent of a taxpayer’s net gambling winnings.

Both types of gamblers, however, share one thing. They need to keep very good records of their gambling activities. This, too, is an area of confusion for taxpayers, says Polizzano.

A recreational gambler can’t simply net wins and losses — that is, combine them and report only the total. Rather, a gambler must add all winnings and report them as income. The losses are itemized and can be claimed as a deduction, but only up to the amount of winnings reported that year.

To substantiate these amounts, the IRS says you must keep records of every single gambling session. “You spend 15 minutes at the craps table and finish up with $500. Take a break, then spend 45 minutes at the blackjack table. That’s another session,” says Polizzano. “In my opinion, that’s overly burdensome. Who really does that?”

Another documentation requirement, per IRS Publication 529, Miscellaneous Deductions, is that you keep a diary or log of gambling activities. The log is supposed to show not only the amounts you win or lose, but also the date and type of your specific wager or wagering activity, the name and address or location of the gambling establishment, and the names of other persons present with you when you gambled.

“If they get the ‘dear valued taxpayer’ letter from the IRS that wants them to substantiate their gambling activity, they won’t be able to do that because they haven’t kept track,” says Polizanno.